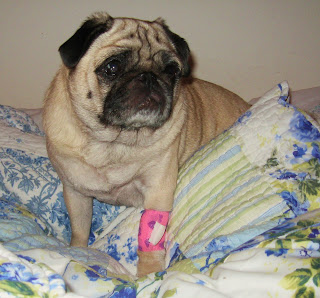 There’s only one episode of True Blood left, I’m in a state of mourning.

My little dog Greta is doing good. She had her stitches removed this week. She’s healing nicely. It’s been a tough few weeks – she had bladder surgery so she needed to go outside to relieve herself every 90 minutes or so – even during the night! And once she peed on my head and pillow. The warmth was nice for the first few moments, when I didn’t know what it was. She’s a pug so she also had her elongated soft palate reduced as well as rhinoplasty (a nose job, I’m not kidding!). For the first few days we called her Michael Jackson. (The above photo is Greta 1 day post-op. She looks a bit woozy and she still has the bandage on her leg from all the IVs)

My favorite new launch so far is Parfum d’Empire Wazamba. I had been salivating for SL Nuits de Cellophane and AdP Magnolia Nobile both of which turned out not to be my thing. Guerlain Les Secrets de Sophie is on it’s way to me – so that isn’t in the running yet.

Beverage of the week: Hazelnut iced coffee with skim milk.

I enjoyed watching Weeds the first 2 seasons. Now I want to shoot Nancy Botwin in the head. Her character gets on my last nerve.

Movies: I watched Bruno this week...what a snore. I also saw District 9. This isn’t my sort of sci-fi movie. I don’t need to see an apartheid allegory wrapped up in a sci-fi costume.

A little birdy told me that Sonoma Scent Studio opens for business next week. The long wait is over – yay!

A dear friend sent me a mini of Molto Missoni. Wow, what a find. I had never heard of it before. It’s a wonderful incense mixed with Red Hot candies. I instantly searched for it online and found 1 bottle at a decent price. It’s discontinued so very hard to find.

It’s a shame L’Artisan discontinued Vanilia. I don’t go for vanilla perfumes but I’ve found Vanilia to be one I like. It’s a floral vanilla – sort of a precurser to Hermes Vanille Galante. Vanilla with lily and other florals. It’s possible I’m thinking more fondly of it now that it’s dc’ed (this happens).

Salad of the week: I bought some heirloom tomatos at a farmers market – red, yellow and slightly green tomatos, awfully mishapen and downright beautiful in their hideousness. I made a simple plate of sliced tomatos, basil leaves, razor thin cucumber and slices of goat cheese (took a log of goat cheese and thinly sliced it). Then drizzled with pesto sauce and sprinkled some garlic salt and pepper. OMG so good!

I got Guerlain Vetiver Pour Elle this week. It’s a pleasant surprise. I’ve never been able to wear the masculine vetivers. I wear all sorts of masculine fragrances but just can’t do the vetivers (Encre Noir, FM Vetiver Extraordinaire, etc.) Vetiver Pour Elle is true enough to real vetiver but with it’s edges softened. I like it.

Lancome Magie (from La Collection not Magie Noire) is a beautiful thing.

Jil Sander No. 4 is a great flor-iental. It runs with the likes of Amarige and JPG Classique. Potent, sexy stuff.

The weather has been downright perfect. I wore Theorema this week, also YSL Nu edp and Juliette Has a Gun Citizen Queen.

Right now I’m wearing Chanel No. 18. What is the point of this stuff? It’s so inoffensive and bland – seems it was created for babies. Or perhaps new mothers, since babies probably shouldn’t wear perfume ;-)

I liked AP's Vanilla, too. You've described it perfectly. Now I regret not buying it. I saw it for half price this summer--40 Euros for 50 ml. I'd already spent my perfume budget though.

I got a sample of Vanille Galante from a Hermes Boutique in Austria. I liked it, but didn't love it, especially for the price.

I adore Jil Sander No. 4. I discovered it this summer, too. I bought the Mimosa Harvest Amarige this summer and was pleasantly surprised to come home, google it, and find a review here. It's lovely.

I know! No more Eric for months and months!! But I am looking forward to some awesome maenad destruction.

Aww, bless. Greta looks cute, if a tad woozy! She peed on your head? Yikes. Good to hear she's recovering though. How's your pillow? ;-)

I like Wazamba too. I scrounged a sample from Les Senteurs.

I'm still watching Weeds, but not for Nancy. I watch for Andy, Celia, and Shane (especially Shane. Damn, that kid is a good actor). I also liked Esteban, and Pilar was wondrously evil. In fact, most of the characters are great fun. It's just a pity that the centre, Nancy, is a black hole of self-obsession and amorality!

Hi Abigail - I don't normally post on ISTIA, but I liked your random thoughts this week. I too am supremely happy that Sonoma Scent Studio is up and hope that Laurie's gorgeous scents will cure everyone's recent fragrance ennui. The reformulated Jour Ensoleille is really a chypre lover's dream.

And I also want to say yeah! about reading some love for that wonderful classy Lancome Magie, which is one of my favorite go-to confidence booster fragrances. It is just perfect for everything all year long! I especially like to wear it in small doses for white shirt & pearls business type situations. And even my husband likes it. I don't see it mentioned much in the fragrance world, but it sure is nice stuff.