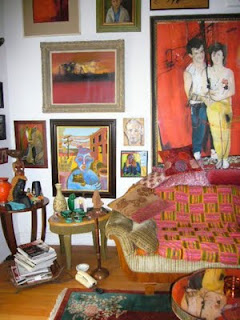 Diorella, Diorama, Diorling, Diorissimo and Miss Dior seem to get the lion's share of appreciation when it comes to older Dior fragrances, and while I like several of them very much, I think my favorite is the newest of the old, Dioressence.  Granted, of the lot, I've never smelled Diorling and Diorama in anything close to original form, and the Diorling reformulation is pretty pale compared to what it must once have been, so maybe I'm biased.  I should also say that I haven't smelled the most recent version of Dioressence, either.  Still, for me, the original 1979 Dioressence would be hard to beat.

Guy Robert, the perfumer behind Dioressence, created several other well known fragrances, a few of which remind me more than a little of Dioressence in certain ways.  I can smell some of the dusty incense quality from Hermes Caleche in Dioressence's heart, for instance, and something of Amouage Gold in there as well.  Dioressence is a chypre and smells quintessentially of oakmoss to me once you get past the pronounced geranium, galbanum, and rose up top.  In fact I would say that the most interesting movement of the fragrance for me is its seamless segue from galbanum to oakmoss, creating an interesting, textured progression from one distinct green note to another, each of which would seem to get lost taken together.

Osmoz lists the notes as the following: aldehydes, orange, galbanum, bergamot, carnation, geranium, rose, cinnamon, benzoin, patchouli, oakmoss, and vanilla.  Violet is included in the description but not the pyramid.

I suppose there are those who will smell Dioressence and sense nothing but a wallop of old style patchouli.  There's certainly enough in there.  And the patchouli combined with the cinnamon can seem like a lighter version  of H.O.T. Always by Bond No.9, or a slightly more domesticated animal relation to the original Givenchy Gentleman, but to me the cinnamon and patch seem like embellishments, meant to support or underscore the primary green notes.  Even the carnation, geranium, phantom violet and rose seem to hover around in the background to my nose, making the fragrance a lot more masculine than most modern feminine fragrances.  No guy raised on a steady diet of mainstream sports colognes is apt to agree with me, of course.  Dioressence reminds me of another pretty masculine old feminine, Trussardi, which was released in 1984

Dioressence feels a little moodier than the other vintage Diors.  Diorella is sunny and succulent; Diorissimo quite upbeat as well.  Miss Dior, while not prim, is certainly more sedate than Dioressence.  Something about Dioressence reminds me of some seventies bohemian hang out, infested with velvet pillows and thick with lingering incense smoke.  Miss Dior would walk into such an establishment clutching her purse pretty tightly.  Staring at supine Dioressence, spread across a series of batik-patterned throws and a thick shag rug, she'd wonder whether something hidden in the carpet might jump up onto her tweed jacket and hitch a ride home with her.  In style it certainly straddles the hallmark fragrances of the 40s and 50s and the bold pronouncements to come in the 80s.

It has moderate projection and lasting power and for the most part settles down to a nice soft mossy haze after about thirty minutes to an hour or so on me.
Posted by Brian at 4/26/2011 04:27:00 PM

I've never smelled this one. When I met Luca Turin I was wearing Rush and he commented that Rush smells like the original Dioressence. Do you think so?

I forgot to mention this. One bottle I own lists oakmoss on the box. It's obviously more recent but not as recent as the latest formulation. I found a box this weekend which is pretty dang old, and I haven't compared them yet but I sense they're pretty similar. The slightest difference is that the original seems a bit more resonant. Duh, right?

As for similarities to Rush, HMMMMM. I don't know! I can kind of see it, yes. But right now I'm smothered in old Poison so it's hard to get a good clean head to think on it.

The only Dior I own an appreciable amount of is J'adore. Total hole in my collection.

If you start rectifying that, I would try to track down slightly older versions. From the reports I've gotten and the smelling I've done, the newer versions aren't anything worth filling a hole with.

That's why I mostly ignore the Dior section. I do like Eau Sauvage.

I've always avoided Dior because the whole line seemed so ladylike (and, really, would I want to smell like Princess Diana?), but, now, uh, oh, I'm going to have to try this one. I'm starting to trust you, and, besides, you know that I was the chick lying on the floor (the first time I saw my future husband and father of my children, he was lying face down on someone else's bed in a dark room, having eating the one hash cookie that had all the hash in it, and I couldn't tell if he was a boy or a girl, so I asked someone who the hell is that?)

Thank you so much for this one, Brian, because much as I love Miss Dior, this one remains my all-time, hands-down favorite Dior, precisely because it's so unlike its siblings!

Dioressence doesn't get a lot of love, probably precisely because of its more...bohemian sensibilities? Some people smell the vintage and get only patchouli and maybe oakmoss, but I get a lot more than that beside, and your review reminded me that I really, truly, need to locate a vintage decant somewhere. The newest incarnation is nothing like the old one, and what the old one was - and is - was a glorious, green, sumptuous mossy mess of a perfume that did wonders for putting some steel in my spine!

And you can never have enough of those, right? ;)

Brian - where did you find it? Not that I would expect there to be more of the same, but I am wondering about how to go about the hunt...

I have to try this. I may have, back in the mist of two years (aaackk! almost three!) ago when I started the blog, but would appreciate it more now. It sounds like one I'd like, a lot.

Tarleisio, I haven't seen the newest one, I don't think. I wonder how it differs, exactly. I guess the original would have had animalics aplenty? I think too that Dioressence is a great use of geranium. And when I first smelled it I thought, mmmmmm, violet. It's blended in a fascinating way, to me, or is just a great alchemy of notes which compliment or enhance each other in ways I'm not used to.

Hiya, Lang. My first bottle was more recent and I got it at Saks in Chicago about...two years ago? This past year I was in a couple of Saks in different cities and looked at the packaging and the list on the box was longer or different.

My second box I found this weekend. I'm telling you, if you see a kiosk in a mall or a perfume store which on the surface seems to be a little low rent--HEAD IN. They have been around more often than not and their inventory is from some garage in Peoria, which has a surplus of older bottles and packaging to get rid of.

This weekend I was in Little Rock. A most disagreeable (he visibly sighs when I approach) kiosk proprietor had the following:

The challenge in the kiosks is that they're cramped. The stuff you're most likely to be interested in is the stuff fewest people ask for, so more often than not it will be buried behind the stuff they stock up against the glass where passers-by can most easily see it.

But always check these places out. And check out drugstores, even newer drugstores. This weekend, on the road, at Rite Aide and Walgreens, I saw:

Olfacta, you can try it in June. Don't forget to bring decants. For the most part, you can take away what you like.

And the first time he noticed me, I was playing ping pong at midnight with my then boyfriend, wearing a fur coat over long flannel nightgown and Le De Givenchy. He was instantly smitten.

So if anyone heads into one of those iffy-looking perfume kiosks in somewhere BFE (we don't get so lucky on this side of the Atlantic) and locates a bottle of vintage Dioressence, for the love of Guy Robert, puleeeeeeze let me know!

I'll even help bury the body, that goes without saying.

I once read an interview with Francois Demachy, in which he mentioned he is in the process of reformulating Dioressence to bring it closer to what it used to be. The current version is not just a different rendition, but a different fragrance altogether!

I love your description of it as "some seventies bohemian hang out, infested with velvet pillows and thick with lingering incense smoke." Perfect!

Victoria, what DOES the newer formulation smell like? I know/think I smelled it, and was glad I'd already purchased an older bottle, but I can't remember.

I've never smelled old Dioressence, but I've got the new one. I'm wearing it today.

I'm not great at describing perfumes, but it starts with galbanum and then warms up to a spicy green with that distinct Dior-ish waft, a tiny bit like a greener Miss Dior.
I really like it, even if it is just a ghost of it's former glory. What you've never had, you can't miss, no? :-)