Amorvero: Back to My Roots 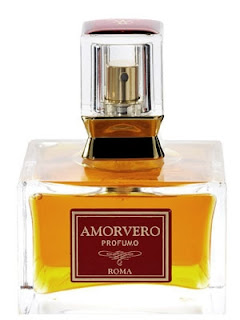 For months now, I've felt there's something wrong with me.  I was kept pretty thrilled by fragrances for a good four years, consistently surprised, enthused, and engaged.  It's been a real passion for me.  Every day I packed a perfume bag the way some would pack a lunch.  I'd sit at work sniffing one bottle after another.  I'd have four to five different things on, making comparisons.  I made my co-worker sneeze.

Suddenly, I wasn't so interested.  I went from buying samples and bottles on a regular basis, sniffing religiously, to a dry state of affairs where maybe every month or so I might make a single purchase, and I started visiting my perfume cabinet so infrequently it might have been a lost wing in a massive house.  It's been weird.

I couldn't imagine that the fragrance industry turned overwhelmingly boring overnight, so I thought it must be me.  Maybe I'd gone fickle.  Maybe I'm prone to boredom.  I know now that it isn't really me, because the fragrances that always surprised, enthused, and delighted me are still doing so.  And I guess I don't care too much to parse all the vagaries of the industry to determine what's happening on that end, when really the bottom line is that most of what comes out now feels uninspired or insulting.  Otherwise I think I'd be writing more - about my dissatisfaction, if nothing else.  The fact that I can't even be bothered to write about that is the biggest surprise, and disappointment, of all to me.  I feel the industry has finally turned a corner, where restrictions and cost-cutting have crystallized into banality and bottom line as standard practice.

I thought about doing posts during all this.  I thought, okay, so if I still love the same fragrances, what are they?  What would be my 25 desert island scents.  Granted, 25 makes for a pretty cushy island, but narrowing down to ten, while it makes for good type, has always been a struggle for me.  Even 25 seemed like a waste of time.  How often had I written about these fragrances, anyway?  How much more could I have to say?

I say all this mainly to give you some context for how even a simple, well made scent can seem like a revelation these days for me.  Back in October, for instance, I was in LA, and someone who didn't think much of it handed me a bottle of Amorvero.  I'm not sure what I might have thought about it two years ago, but in October I liked it instantly.  How much my liking it had to do with this dry spell I can't say, and I resisted writing about Amorvero until now because I didn't trust the pleasure it gave me.

After all, Amorvero isn't exactly anything new.  It's a throwback to the big picture vanillic florientals of the eighties, really - recalling things like Poison and Giorgio, among others.  But while many perfumistas look back to the pre-fifties fragrances as the benchmark for quality fragrances, the eighties are really my decade of choice in many ways.  Many of my top 25 scents came out of that era, and I would gladly trade some of the things I've bought from recent years for eighties fragrances I want but don't own.

Amorvero reminds me most of 24, Faubourg, a fragrance released in 1995 which feels more like an eighties scent itself.  Like Faubourg, Amorvero buttresses tuberose and jasmine with vanilla and amber on one end and citrus notes on the other.  Like Faubourg, it lasts all day.  A simple story, Amorvero, but the pleasures are pretty complex.  Each time I return to the scent I find new things to like in it.  The thing is an immediate mood lifter, and adds a level of drama to the dreariest frame of mind.

Amorvero was created for a hotel I've never heard of in Rome, the Hassler.  I believe it was in 2000.  The perfumer is Lorenzo Dante Ferro.  I can't see where one finds the stuff, other than a website I googled online.  It would be hard to track down and try. I'm sorry.  But I was glad to find it, and in comparison to most of the dreck currently being released, it's something of a Godsend for me.

There isn't much about it on perfume blogs, though I was happy to see, in the middle of writing this, that Cafeleurebon just wrote about it several days ago.  I like that it goes against current trends in perfumery, because those trends are really bringing me down.  And while I'm not yet sure it would enter my top 25, it has a lot in common with another fragrance favorite on that list, Miss Balmain.
Posted by Brian at 12/19/2011 07:13:00 PM

Well, I guess you have learned something about yourself through this weird experience, and that is surely a good thing. A lot of people go through a slow-down phase, usually after a prolonged buying frenzy that can go on for years. I noticed someone on NST remark the other day that she is going through a slow-down and is enjoying the change of pace, and is making fewer mistakes than in the past. I know what she means, as I am the same.

It's nice that an unremarked fragrance has given you a lift - it must be almost like your own bespoke scent!

I don't know, Annemariec. I've had my slow down periods, for sure. I think, like Abigail, it's less to do with what I own and some kind of over-saturation and more to do with how insipid many modern releases have become. It's hard to get excited by much I've seen lately.

In the midst of all this I've been enjoying Amorvero immensely, and with so many recent releases smelling thin or imaginatively watered down, it's nice to have something new-ish which lasts and has some vigor.

Brian, please continue to write your wonderful reviews and observations. I do not think I can adequately express how much your very personal, thoughtful and sensible opinions about perfume have meant to me. I burned out in the 80's on Poison and Oscar. I only just returned to purchasing and reading about perfume. I followed a link to your blog and stayed up nearly all night reading you and Abigail's opinions. I felt instantly at home. Lots of new fragrances are dreck., but so are lots of new books and films. You will find the beautiful ones because that is what you do. Because of what you have written here, I know and love Encre Noire, Habanita, Azuree, just to name a few. I have discovered beautiful fragrances because you showed me the way.

Thanks, Katy. That makes it worthwhile. I've been busy lately and have felt dispirited about writing here. Mostly to do with lack of interest in what's going on perfume wise. I forget why I write in the first place until I read a comment like this.

I know exactly how you feel. Just a month ago I was thinking that maybe there was nothing left I wanted to buy. Nothing I was smelling was interesting. And then I got a sample pack from Luckyscent and fell for two of them.

I will definitely try this, I love it when perfumers return to older ideas, as long as the quality os high. Like The Party in Manhattan.

I really appreciate the honesty of this. I have gone through similar phases on a smaller scale, and in them I feel like I get a glimpse of what will ultimately be "normal" for me, after I've caught up on the older releases that I am not as familiar with. Maybe I'm too cynical, but I think the number of truly amazing or truly terrible releases in a single year isn't enough to occupy as much of my passion and interest as is currently occupied by perfume. And why should it have to? As long as the perfumes we love still delight us, I'm not sure we've lost much by the new ones being mostly mediocre (until the old favorites start to be discontinued or reformulated, I suppose).

And a merry new year to you and Abigail. Where are you kids?