Every Nose in Paris Knows: Trouble in Paradise and Smelly Chandler 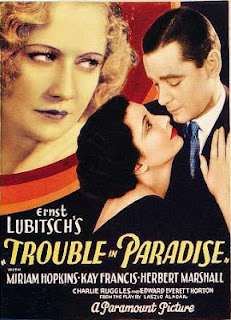 I was surprised, watching an old Ernst Lubitsch movie called Trouble in Paradise the other day, to learn that one of the lead characters, played by Kay Francis, is a sort of Estee Lauder figure, name of Colet, who runs a perfume company. I'd never heard the film mentioned before on a perfume blog - but then, fragrance doesn't play any great part in the story, even if it figures more than in most movies.

Miriam Hopkins and Herbert Marshall play master thieves who conspire to rob Francis of of her fortune. There are some good scenes involving the Colet board of directors, and early on a radio announcer delivers an on-air advertisement for the brand, singing:

are makers - of the best perfumes!

If you and your

permit us to suggest a few.

Cleopatra was a lovely tantalizer!

But she did it with her little atomizer!

Every nose in Paris knows

Miriam Hopkins doesn't get much love these days, but she's fantastic in Trouble in Paradise. And she acts like someone drunk on perfume. Kay Francis is even less well known now, but she makes an equally fantastic perfume mogul. The film was made in 1932, several decades before the release of Youth Dew, so it seems unlikely Lauder was a model for the character. Though the company is French, Francis is thoroughly American, the way Hollywood liked its Europeans. I first thought of Lauder but Lauder makes no sense. More likely the source of the Colet character was Coco Chanel, whose No.5 came out in the '20s. And Francis certainly resembles Coco, with her short hair and dark features. The film pokes fun at her lifestyle: she's first seen buying, on a whim, a jeweled bag which costs 125,000 francs. The bag is stolen - by Hopkins and Marshall, so that they can return it and steal even more.

Perfume has turned up in a lot of books lately too. I've been reading old detective novels - mostly Ross Macdonald and Raymond Chandler. Chandler mentions perfume all the time. In one of his lesser known novels, The Little Sister, there must be half a dozen mentions. Philip Marlowe often comments on the perfume a woman is wearing. It's often part of her spell. Every once in a while, he comments on a man's fragrance as well, but on men fragrance takes on foul associations. Women wear just enough, it seems. If you can smell a man's, he must be wearing too much.

You can watch Trouble in Paradise on youtube. Another good Hopkins/Lubitsch film, Design for Living, is also there.

I just ran across a line about perfume in the novel I'm reading -- Desperate Characters by Paula Fox. The main character, Sophie, dabs some Guerlain perfume that has gone off on her stomach, of all places, as a sort of self-soothing gesture.

I think I read that book--but years ago, if I did. Or I heard about it so much I just think I did? Yikes. Is it good?

It is good, or at least the first ~50 pages are. It's dated, but not in a way that I mind so much. It's droll. Reminds me a bit of The Moviegoer.

Moviegoer I can tell you definitely I haven't read, and I always think I need to/should. I want it to be about a guy who talks about every single movie he watches, describing the plots in detail and the audience and whatever snacks he ate. But I know it probably isn't about that. So I guess I want to preserve that book in my head.

It definitely isn't that! So you should write that book.

I have to tell you Brian, if you end up writing your own version of the moviegoer, I'd have to give it a miss! Only because, i have implemented a policy whereby if any friends/family/co-workers insist on telling me about a great movie they've seen they are only allowed to use a maximum of 5 words to sum up and describe the plot! I find long descriptions of things incredibly tedious. Hey, maybe that could be a great idea for a book...

Lol! Those descriptions were both incredibly funny and disturbingly accurate! I smell a best seller!

I just caught this movie which was playing tonight, it is Trouble In Paradise, I saw a vanity table in the background, I could easily see a Guerlain fragrance, it was the Bouchon Coeur flacon, so it was most likely L'Heure Bleue or Mitsouko, also on the table there may have been a large Coty flacon with a small square label, and what may have been a Lalique flacon on the left. Beautiful, I am still watching the film and hoping to see more flacons!