Hedonist by Viktoria Minya: What's in a Word 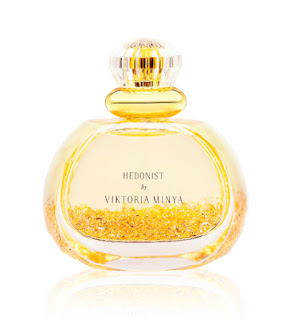 It's been interesting, as early reviews of Hedonist have come in, to see what people make of the word. I had no idea it had quite the reputation it does - you'd think, from some of these reactions, it were a synonym for harlot, trollop, or worse - and I wonder what Viktoria Minya, the perfumer behind the scent, thinks about all this, because to my nose the fragrance is more in keeping with the actual definition of hedonist than with these apparently somewhat popular connotations, and I imagine she must have been thinking of the bigger picture too.

Strictly speaking, hedonism has to do with the pursuit of pleasure - as in, first and foremost - which would make a hedonist, I guess, on the one hand a pleasure seeker and on the other averse to anything which veers in the opposite direction. Nothing in that definition privileges carnal pleasure, though the physical would obviously be included in any bullet list of what floats the boat. That bullet list might also include fine cuisine, silk clothing, spring days, comfortable furniture, and feathers, depending on your taste. It probably wouldn't include okra. Regardless, Hedonist doesn't make any effort to claim one pleasure at the expense of others - and when I smell the perfume it's far more expansive in tone than the "merely" sexual, if those two words can be used together.

Minya, who is based in Paris, has mentioned in the literature for Hedonist that it harkens back to classic perfumery, and it does feel classical, even grand. There's a retrospective quality to the fragrance that nods back to early twentieth century perfumery, certainly - but again, I think the scent sees a bigger picture in its references as well. Some reviewers have compared its wonderful peachy facets to Mitsouko (a reference point I can get behind, as long as I'm not stuck there). For me, one of the fragrance's biggest bonuses, not to mention pleasant surprises - and there are many - is how strongly it relates to some of my favorite eighties fragrances.

That's where some of you will stop reading, I suspect, whereas some will now have perked right up. Hedonist certainly has the iconic sensual boldness that characterizes some of my favorites from that era - Poison, say, or Diva - but without their take no prisoners bombast. I see an 80's connection, I guess, mainly because that decade was the last great period for this kind of sumptuousness, a time when a fragrance was meant to be smelled rather than merely perceived, to register not as a whisper but as a declaration - of elegance, of personality, of intent. Poison, Diva, Paris, and, say, Giorgio, are the no-brainer 80's benchmarks, but Hedonist reminds me more of lesser known favorites from that era; particularly, a fantastic earlier Krizia fragrance, Moods.

Like Moods, and some of the other 80's fragrances I'm thinking of - the once wonderful Creations by Ted Lapidus, for instance, Houbigant's Demi-Jour, or the reformulated Shocking de Schiaparelli - Hedonist is maximally honeyed. It has a green-tinged vanillic sweetness to it I remember from Moods as well. It's a fully saturated fragrance but plays off the skin in a very contemporary, radiantly diffusive way. I imagine people will notice its sillage, without feeling victim to it, and in that way, among others, it updates some of its influences.

Honey-faceted fragrances often have a slightly animalic quality to them, to put it diplomatically. While its aura is lush and dramatic, Hedonist has a sweeter, cleaner disposition. I get a tea note, a very nice tobacco storyline going on, orange blossom, and that honey, primarily. It's a fascinating combination, which lasts well and conjures any number of nostalgically pleasurable mental and emotional sensations. One Fragrantica reviewer characterized the overall effect as "really golden...[reminding her of] honey and ambrosia with a glass of Alsatian Gewurztraminer." I've never had gewurztraminer, but I like the sound of all that. Hedonist feels strangely familiar at various points during its lifespan, maybe because in some way it catalyzes little memories of comfort like this. It's familiar the way remembered pleasures can be. The dry down does interesting, even subtly unusual, things with its osmanthus/peach/tobacco combo, opening it up rather than narrowing it down. The fragrance is heady but bright, surrounding rather than suffocating the way fragrances this opulent can tend to do.

I miss some of those eighties honeyed fragrances, so Hedonist has been a welcome surprise. They don't make them much like this anymore. In most ways the perfume landscape, commercially and otherwise, is starting to seem pretty spare and minimalistic, kind of anemic in the pleasures it affords. Hedonist would be a welcome change at half the fragrance it is. Fortunately, its pleasures pay off in dividends. In the few weeks I've been wearing it I've grown to like it more and more, and I keep noticing different things - like, I think, some cedar in the mix, and a presiding creamy warmth I hadn't singled out for a while because I kept focusing on the peach and the tobacco specifically.

Fragrantica calls it a woody chypre. For me, it has more affinities with the floriental. I hope Minya does more but Hedonist already feels like an old favorite, and I'll take a new line with a single fantastic scent over one with ten mediocre fragrances any day. Luckyscent sells the fragrance, which comes in an appropriately luxurious bottle (pictured above) and box. Already, with this perfume, Hedonist has a new connotation for me.
Posted by Brian at 5/22/2013 07:20:00 PM

I've noticed this thing with perfume bloggers. They seem to be kind of prudish often. At least, they like to talk about skanks/sluts/etc. Pretty much, if they can bring in a metaphor about a oversexualized woman, there are a few bloggers out there who can be relied upon to do it. Which is ironic, considering that perfume bloggers also often complain about the fact that perfume marketing is totally sexualized. I really rue the day that "skank" was coined as an olfactory term. So it doesn't surprise me that many interpreted "hedonist" as "skanky crazy slut OMG!!!!"

That said, I'm a fan of the big 80s florals, and this sounds super-nice.

I think this is a very good marketing strategy. The more people talk about it the better. This is a great name actually. The smell is sexy and attractive. More people will surely get curious about this particular fragrance.

Hey Susan, yeah you might be right. It's a sort of permanently scandalized mode, full of mock shock and just under the surface indignation. It happens a lot, or used to, with Etat Libre d'Orange in particular - those graphics! The obscenity! And you maybe hit on the hypocrisy, because as much as I hear complaints about oversexualized imagery it seems to be provided where none exists.

Hi Beth, Yeah, it's a good name for sure. And an even better fragrance.

I love this perfume! Viktoria was so kind that she sent me a sample. To return this favour I reviewed it on my blog :)

I love it too. It's a stunner.