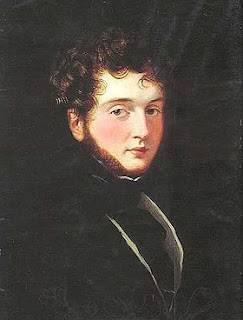 Count Alfred D'Orsay was one of the most celebrated Dandy's of his day (1801-1852). During Count D’Orsay’s time, a particular kind of gentleman, such as Beau Brummel, aroused admiration among the upper crust through their witty remarks and outlandish clothing. They were eager to be noticed and imposed a certain life and dress style in this bored bourgeois society.

Alfred D'Orsay was one of the most famous Dandies of his era. Count D’Orsay was talented in the arts as well as being a witty conversationalist and extravagant dresser.

Count D’Orsay’s more exceptional talent, however, turned out to be that of creating perfumes. His interest was sparked when his mistress Lady Blessington could not find a fragrance she enjoyed. In England, the fashion of the day was intensely musky perfumes, which did not suit Lady Blessington.

And so began the life long ambition of the Chevalier. Alchemist of luxury and love, D'Orsay rapidly developed a growing passion for perfumery. It’s said that in each of his homes he dedicated a room to the creation of fragrances. He continued to dabble in perfumery for the rest of his life.

Parfums D’Orsay was established after his death and named in his honor. Count D'Orsay's original "Eau de Bouquet" was reportedly "reworked" into the line's Etiquette Bleue fragrance.

I recently fell in love with D’Orsay Tilleul, which is the most gorgeous linden fragrance I’ve ever smelled.

I wish I could go back in time and spend an afternoon in his company...
where did you find his Linden?
I love the stories of how true dandies spent hours and hours tying their cravats. I think Baudelaire was of the same ilk...perhaps you can do him next?

I agree, I often think how amazing it would be to go back in time and visit certain people. Josephine Bonaparte and Marie Antoinette in particular.
Robin, from NowSmellThis, recommended D'Orsay Tilleul. I didn't even know it was her at first. I occasionally visit MUA and this one time I asked for recommendations for a linden fragrance and "LastTrainHome" replied that D'Orsay Tilleul was very nice. Turns out that LastTrainHome is Robin! And she is right...it's the nicest Linden/Tilleul/Lime blossom I've ever smelled. Now I'm curious to try other fragrances from the D'Orsay line.

I have their Nomade. I like the opening very much, but it doesn't last long on me.

Unfortunately, I've found that linden scents make more people I know sneeze than any others!

I like linden. I have an old but nice Demeter, and the Jo Malone one. But every time I wear them, I may as well carry a card saying 'bless you!' to hold up - it would save me the trouble of saying it.... ;-)