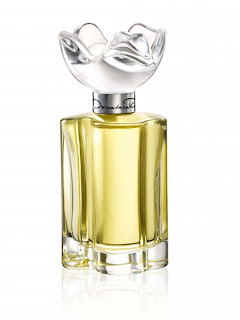 Reformulations, sometimes (as here) referred to as "updates" or "modern interpretations" are rarely, in my experience, cause for anything but dread.  So Esprit d'Oscar is a nice little surprise. I was, and still am, partial to the original Oscar de la Renta fragrance, known simply as Oscar, which was created in 1977 by Jean-Louis Sieuzac (he of Opium, Bel Ami, Fahrenheit, and Dune--all wonderful). Primarily a spiced tuberose affair, Oscar has seen several alterations since its debut, and while I enjoy the latest version less, I do own and appreciate it.

The original was more subtle, and handled its opening and transitions more gracefully. It's not quite as buoyant or resonant now as it once was, and shares with several butchered florals (Sung and Giorgio come to mind) something pretty shockingly shrill up top, a synthetic bombast which pierces my consciousness like an ice pick to a bunny rabbit. You can feel the original structure in there, but it's more crudely articulated.  It's a lot more brutal, to use a popular expression.  If Fracas is one of the first Brutalist creations, as Chandler Burr declares, Oscar has become, in the last decade or so, a bit of a splatter painting.  It's more than a little all over the place.

Esprit is being positioned as an entirely new fragrance, but de la Renta is very clear about the fragrance being an update, too, which is technically trying to have it both ways. It's hard to blame the company's attempts to simultaneously distance itself from and embrace its lineage. The current Oscar, still available at the mall but a mainstay at drugstores across middle America as well, has quite an Old Lady image to shake. Anything which isn't fruity floral seems to fall into this category by most casual sniffs, but few more so than present day Oscar, which conjures visions of hair nets, blue rinse, eighties ruffled blouses, and the plastic covered sofas one finds in grandmother's house. Remarkably, Esprit does have it both ways. It takes everything which was fresh and gorgeous about the original, and cleans it up like someone removing the grime from a masterwork, allowing a viewer to see it anew.

It might be that de la Renta, with Esprit, is making a bid for contemporary inoffensiveness, because it's true, this is one of those fragrances it's hard to imagine anyone being even the slightest bit offended by. Yet it accomplishes this without any sense of having dumbed itself down. Esprit is a lovely, mellifluous thing, and reminds me more than anything of "Oscar" by way of Chanel. It has something to it that reminds me of good sandalwood, though the pyramid lists none. There's a rich but mellow creaminess at play, featuring jasmine, tuberose, and orange blossom. This combination, once past the bright, even sparkling top notes, reminds me very much of my bottle of 1980s Oscar, and like some of the Chanel fragrances I admire there is a fine soap quality to the composition, making it feel clean without being particularly antiseptic or insipidly citrus. The notes list lemon, bergamot, and citron, but to make another Chanel comparison, the overall effect, despite this opening, doesn't feel presided over by it, as it does, say, in No. 5 Eau Premiere.

De la Renta assures you this is a long lasting floral oriental, and while not exactly short lived, I wouldn't say it's particularly tenacious. It has a nice subtlety to it without feeling underdone. I can smell it hours later but it doesn't project very forcefully, and one of the great things about Esprit is that it's pretty difficult to over-apply.  It makes a great masculine as well, sharing something (don't ask me what, exactly) with Prada Amber Homme.  When you consider how often older fragrances are ruined these days--hello, Opium--Esprit is practically a marvel. I at first thought the price tag was steep. Having spent some time with the fragrance, I've changed my mind. It's a far better use of my money than many niche fragrances I've smelled recently.  Compared to them, it's a bargain.

Wow! These reformulations of older scents usually have such horrible results - it's great to hear that they actually got something right! I wasn't a huge fan of the original de la Renta (just not my style), but would love to try this one. Thanks for the review, Brian.

I like it, Karin. I keep enjoying it. The original doesn't even list tuberose, which was a shock to me as I smell it. You definitely get a smooth, rich, blended tuberose in Esprit. From the original you get a sharp carnation in there, which might have to do with my headaches. Definitely look for Esprit.