This Week at the Perfume Counter: Good Enough for Kim 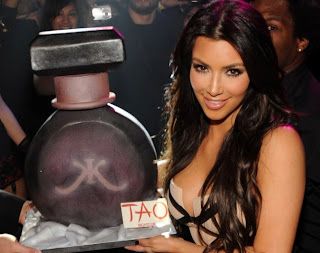 I'm always a little cranky when I show up at my favorite perfume kiosk here at the mall and the Russian women who own it aren't there.  Recently, they hired two new employees, neither of which knows next to anything about perfume and augur a much more belabored conversation.  The owners know their inventory well, no matter how far hidden behind boxes of Mariah Carey, Queen Latifah, or Polo Double Black.  They know me pretty well, too - what I have and what I tend to look for.  When I visit, they tell me what's come in since they last saw me.  They understand that I'm a nut, that I'm the rare guy shopping for himself, more often than not on the woman's side of the counter.  The young girls they've hired are convinced I must have an addiction to buying buckets of perfume for the ladies in my life, and they spend a lot of time trying to interest me on the 20 dollar cheapos on display front and center for impulse buys.

Yesterday, I brought a friend with me.  He and I were looking at their stock of Guerlain, and I wanted him to try out Moschino Moschino.  I pointed to the box and the girl had no idea what I was talking about.  It was a needle in a haystack to her and I couldn't seem to point precisely enough through the glass.  I felt like I was in an Marx Brothers routine.  The Russian women and I have a fairly easy running dialogue.  The new girls are like that lady at the clothing store, who feels compelled to comment persuasively on each and every thing you set your eyes on, pushing for that sale.  Every perfume, they assure me, is very hard to find.  Aromatics Elixir, for instance, isn't made anymore, they say, as if it manages to be a bestseller only in some parallel universe.  Bond No.9 Wall Street is a lovely woman's perfume.  Mitsouko is an after shave.

As we were standing there, smelling how awful the latest iteration of Egoiste is - a cinnamon bomb, suddenly, missing all the sweet sandalwood I remember - a customer approached asking for Kim Kardashian.  The girl sprayed some on her and the woman seemed to love it, but she was totally torn.  How could she look anyone in the eye, if asked what she's wearing, and tell them with a straight face, without seeming like she was in a rush to get to Claire's for a beaded friendship bracelet and a double finger ring with her name set in rhinestones?

Listen, I told the lady.  "Lie."  If you must.  If you like it, and you want it, get it.  But she couldn't get over the stigma, no matter how many times she returned to the smell on her wrist.  It's nice, I agreed.  But it's a pretty standard smell and if the name is something you can't get past there are several others you might like instead.  I asked the sales associate to spray Carolina Herrera (she pulled out Carolina, convinced it was the same fragrance) and Michael Kors on tester strips, but the lady saw no similarities - not even remotely.  It made me realize Kim Kardashian's specific appeal. Kardashian removes all the rubbery camphor from tuberose, augmenting the sweetness with buttery cream.  The peach in Carolina Hererra doesn't seem to replace that (apparently) much desired effect.  The spicy incense kick of Michael Kors takes things in another direction entirely, the extreme opposite end of a spectrum.  Unfortunately, the kiosk has no Fracas, and though I'd mentioned how standard a smell Kardashian is, I couldn't seem to think of another fragrance which approximates it.

We're all standing there, troubling over this, and the sales associate, all of 19, says, "It's really great, Kardashian, because any woman can wear it.  Old women can wear it."

My friend and I were speechless.  The lady, probably in her late thirties, smiled uncomfortably.  It renewed my barely latent contempt for sales associates in general, that special ineptitude they often have, and when I got over my shock I told her that in probably all of ten years she'll realize that getting her foot in her mouth will be a much more arduous enterprise than she's able to realize now, requiring a nimbleness and a lack of perspective she will only vaguely remember as a thing of the far past.

She lost the sale, of course.  But she made up for it with me.  Like Kim, I'm pretty easy.  I got Moschino for my friend, who's just taken to wearing Poison (prodigiously, thank God) and Caleche for myself.  The new Caleche is much maligned by Luca Turin and others as a wan reflection of what it once was.  I don't mind it, though I have the older version and see the point.  The new version is indeed far more masculine, and a lot less pissy, which could be an asset to some. It isn't an asset to me but I like it.
Posted by Brian at 5/14/2011 01:19:00 PM

Great post! I really enjoyed it.
I like to be left alone while sniffing. The sales people I've encountered generally had little of value to add and constantly interrupted while I was sniffing. Yes, I take sniffing pretty seriously.

I did meet one SA who was very enthusiastic and accommodating, but he lost me when he said "Black girls love Hot Couture". What the hell is that supposed to mean?

"Old women can wear it". Oh, gee thanks for letting me know. I'm so old, I don't know what I like nor what I am allowed to wear now that I am useless and sexless. I would have lost my mind! Thank you for putting the child in her place.

Sales people: If 50 people of similar age/skin tone/gender/etc all buy the same fragrance from you, read into it all you want, but don't share your impressions with customers. You are bound to lose the sale.

My feelings about SAs are...complicated, Joan. My ultimate fantasy is to go into an empty perfume shop with hours to explore by myself. One time, at the Perfume Shop in Portland, they allowed me to go back behind the counters. The place is an old house full of perfume. You walk on the floor and can hear the bottles rattling as the beams shift. Behind the counter there are rows and rows, floor to ceiling, of perfume. It's impossible to take it all in from the customer side of the counter. And inevitably the SA will tire of going through each one to let you know, exhaustively, what they have in stock. I got to look at every last little box, and found many things they'd overlooked or imagined I wouldn't be interested in.

The staff at the Perfume House is exceptionally knowledgable. They're a rare case. Aside from them, the best experiences I have are at Barneys, though the Malle reps there can sometimes be insufferable. Malls are the worst. You walk in and they clock you and immediately they swarm around you. They say the most insipidly bizarre things, and I find it very distracting and annoying, but there's no getting rid of them, so I try everything in the book to get as close as possible to that Perfume House experience, where I can look without distraction and really explore and discover in a way that make the experience more tolerable.

But yeah, the things they say! Ugh.

Im new to perfume blogs,I found you...the pleasure!! I know this is off topic, but I really need your help. I'll try to be as brief as possible.(a phrase that's normally a prelude to a long and boreing saga)I finally found a vintage bottle of SHOCKING! on ebay,Ive wanted one for a long time. It was full! It had the box,too! The seller did mention that the stopper was broken,and snappedoff inside the bottle,but what are vintage/antiques for if the're pristine? It came in the mail..the pink satin lined box,the glass dome with embellished lace print, the spray of flowers,the wee measureing tape...it was all there. The stopper was wedged into the bottle,and I can see an old stain on the inside of the satin box where the juice has leaked out. And the scent..was of old fabric,cardboard,a bit of must..and nothing else.???nada. Then I saw in raised letters on the velvet base of the bottle, FATCICE. oh. That is French for colored water,isn't it? It's just that i may break the bottle if I try to get the stopper out,and,well,it's full of smoke and mirrors isn't it? I want to be sure before I try to prise it out,but I will refrain untill hopefully benefiting from the fruits of your superior knowledge.LOVE LOVE LOVE this Blog,Thankyou so much

Hi Diana, I'm glad you found us. You know, ebay can be a real crap shoot, unfortunately. Even when a seller means well, he/she doesn't always know what's being sold. I've ordered "rare", "vintage" bottles only to receive much more current versions. Often the pictures used aren't the actual item, just an image the seller grabbed online, though in your case I bet the image was of the bottle you received, right? I'm guessing the seller didn't realize it was a display bottle.

I had bad luck but it turned out well. The sellers refunded my money. You might contact this seller and explain the understandable mistake. I love factice bottles--I was just trying to talk a sales associate into selling me a dusty two foot tall Shalimar factice the other day--but when you expect to get perfume it's a real disappointment.

There are many reputable sources/sellers on ebay who specialize in perfume. They do know their product. I don't buy enough on ebay to tell you which, but they tend to sell only perfume, and they have very high ratings.

Have you tried contacting this seller to discuss, or is the shock still settling in?

As I get older I get annoyed with SAs less and less: most of them are not good at anything; I get to tolerate them for a couple of minutes and they get to live being like that the most part of their lives.

Oh Thankyou for replying so quickly!! Its as I suspected then. Nevermind, It was pretty cheap,about 25 pounds (IM from Long Island but am liveing in the UK) Im positive the seller didn't know it was a factice,and part of the reason I wanted it was,er, ahem sotto voce...I loved the bottle in pictures I'd seen in books. You won't hold that against me, I hope!?! I am so gratefull to you and Abegail for writeing this blog, some of the others I'd looked at were filled with endless hyperbole about scents that were either A.impossibly expensive, or B.impossible to obtain for mere mortals such as myself.There might be a hint of jealousy there however. I can't thankyou enough for the fun and pleasure your wonderfull and funny writeing has given me,despite your terrible handicap. You know,being 'regionally limited' I think it was. I think I've mis-spelt Abagails name,sorry. Oh, thanks for defending Amarige,I love that babe!!!

Whoa I was just laughing myself sick at Brian's post Joan. I have a black girl on my sofa who would "love" to be told she'd like Hot Couture because she's black . She loves Fantasia de Fleurs ,Chanel No 5 and La Perla because , bless her, she didn't know that skin colour gave you a perfume preference. We must hang about the Creed counter Friday in case some ars7**l" suggests Love in white because a visitor to our shores wears it and she's dusky.