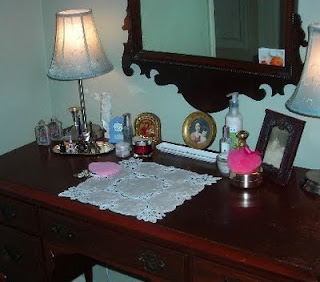 The biggest surprise?  Only one of these women held on to the single remaining bottle of perfume her grandmother left behind.
Posted by Brian at 8/12/2011 07:34:00 PM

My paternal grandmother wore scent, but I don't know what. I remember her smelling vaguely of pressed powder, rose, and, when I was much younger, stale cigarettes (Winstons specifically). Sometimes I think that's why I am predisposed to roses. If I knew off a scent she wore, I'd buy it in a hot minute.

My great-grandmother on my mom's side did keep her scent on a glass tray. She also had the most fabulous hats. I was only a girl when she passed. No one appreciated them when she died so they weren't kept.

I really regret that as an adult.

My sister-in-law recently gave me an oval glass tray w/gold edge for displaying perfume! She knows I "like" perfume and it was a thoughtful gift, but my many bottles would never be subjected to heat and light on a dresser top-"Quel Horror"!

Your interviews of women and their maternal perfume memories was really intriguing. Neither my mom nor grandmothers wore fragrance and out of five girls in my family I'm the only one into perfume-so no scent memories there, unfortunately. It sounds like fun.

The women's positive relationships with their grandmothers was what I expected, but I must say I was a little surprised at the negative comments about their mothers. I would expect it from teenagers when competition and bucking authority are common, but to still feel that way as a grown-up is interesting. I'm neutral/positve about my mom. She's a mellow, laid-back lady so even though we don't have much in common we get along : )

I have all three of the bottles my paternal grandmother left behind: Wind Song for every day, White Shoulders for church, and L'air du Temps for looking at. She had a glass tray, but she usually kept her favorite (paste) jewelry on it. I don't know where it is, I think it might have been left behind when she moved from the farm house into town. All of the perfumes were in her top dresser drawer, along with lace-edged hankies for church, Certs, hair nets, and a tiny bottle of those Ammonia Smelling Salts.

Wind Song, Oil of Olay (the pink cream, of course), Max Factor Pan Cake, Coty 24 hour lipstick, and a slight hint of mothballs-that's what a kiss and hug from Grandma smelled like.

I miss that smell. So very, very much.

My story about my grandmother and mother is quite different. Neither one had a glass tray. My mother’s mother, though a naturally beautiful woman, wore plain, modest dresses, glasses, and naturally grey hair. She never wore any scent that I can remember, and didn’t have a display of womanly things on her dresser. Now I wonder if that had to do with the fact that she and my grandfather were Communists, in the days when that meant being idealistic and believing in equality for all. It is only the smell of certain foods cooking (she was a great cook) that bring her back.

My mother on the other hand was very chic; she felt she had to make up for her lack of natural beauty with makeup, fashion, and, yes, scent. I remember her wearing Shocking and Bond Street by Yardley when I was a child. But she would never have been caught dead with a mirrored tray, as we lived in an architect-designed mid-century modern house, where every object was, as in a Japanese house, hidden away. It was peaceful and zen in some ways, and oppressively minimalist in other ways. I do remember, however, thinking my mother was very beautiful and stylish, and I loved the smell of her perfume. Problems arose, however, when I began wearing perfume myself because she liked the same scents that I was drawn to. When I started wearing Cabochard, she switched to that one herself. Naturally I had mixed feelings about having her copy me, but decided not to say anything. Eventually I switched to Magie Noire, and the first time she smelled it, she swooned and bought it for herself. The story goes on as I switched to new perfumes to stake out my own territory. And after she died I found that she had, to my surprise, stashed away a bottle of my latest scent in her bathroom cabinet, though I had never noticed her wearing it in my presence. I was left, as one always is after someone dies, with many questions that will never be answered. (I look at bottles of Shocking and Bond Street on ebay sometimes, but I’m a little afraid to buy them.)

I have no perfume-scented memory of either of my grandmothers. For my mum's mum, there was the smell of soda bread baking in an Aga, on our visits to Eire. And the only smell I remember to do with my paternal grandma, who lived with us, is the smell of burning hair the time she decided to use tongs on my waist-length locks when I was about 8. My mother threw a fit!

But my mum has one of those trays. Perhaps it was my grandma's, I don't know. Anyway, it holds a bottle of J'Adore, a bottle of White Musk, and one of those crystal trinket boxes full of old necklaces and earrings.

My grandmothers both passed when I was very young so I have no recollection of their perfumes. My mother had wonderful taste in perfumes and doesn't really wear perfume anymore, but I find myself craving the scents she wore- vintage Shalimar edc (which I bought & gave to her because sniffing it gave her so much pleasure), Miss Dior, Nahema, Replique (I wish!) and Joy- both of those in parfum. My amazing Aunt was my perfume guru. She had a round bed with a velvet tufted headboard and shag carpeting you would sink in to your ankles. Her super fancy dressers had no trays but every inch was covered in perfume. She wore it all- and I often smell her perfumes and know she is near me. I love your posts Brian. Love.

Yesterday I chanced on a lecture at the Met on a decorative objects exhibit of boxes, many of which were for cosmetics or the toilette in general. She described the 5 to 6 hour costuming and application of cosmetics, doing the hair, all accessories perfumed. (Amazing they didn't think to wash during this process). The sets they had of trays and bottles made of silver and other precious materials given as wedding presents. I guess our older sisters and mother's fancy trays and brushes arrayed on a dressing table all come directly from the customs of the aristocracy of this time period. It's the romance of the idea of being a lady of leisure who entertained during the long long hours of putting herself to together for the appearance in public or at court or at the opera.