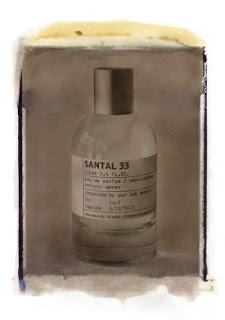 Los Angeles seemed more congested than ever this last time I was there.  Even getting coffee at the local coffee shop felt like being stuck in traffic.  Line for drink, line for creamer, line for sweetener.  Lots of excuse me please.  It was a hectic trip but a nice one, and going to look at perfume, whether at Luckyscent, Barney's, Fred Segal, or otherwise was always a welcome, if rushed, respite.

I'd never paid much attention to the Humiecki and Graef fragrances and was pretty pleasantly surprised, especially by Multiple Rouge, which is kind of a dream of a thing.  I call it Trashy Sophisticate, the kind of scent that showcases the best of high and low.  Rouge is sweet but savory, so tart (pineapple, peach, red berries, frozen orange) you think you won't be able to take it, even though, for me, it's pure joy from start to finish.  It's said to be linear but I see a lot of development in it, and the coriander and immortelle weave in and out with a subtlety I appreciated, given this isn't exactly an understated fragrance.  I suppose I agree with people who have characterized Multiple Rouge as an aquatic to aromatic fruity thing.  It has tremendous lasting power and good sillage that spreads happy waves around you.  Few recent discoveries have given me this much sheer pleasure.

I'd debated whether to invest in a bottle of Peche Cardinal by Parfums MDCI ever since I received a decant from Abigail over a year ago.  Most of the MDCI fragrances are pretty stunning.  Peche doesn't seem to be the favorite for the majority of those who appreciate the line, but it's always been my standout, and I knew that if I ever dished out the cheese for a MDCI bottle Peche would be the one.  I don't smell the artemesia in the blend - nor the blackberry, past the opening.  I do smell the peach, the coconut, the tuberose, the lily, and the musk.  Peche reminds me a little of Yvresse but it's drier, if no spicier.  This one seems a little trashy to me as well, in a way I really like.  While many of the MDCI fragrances seem to harken back to the forties and before, Peche reminds me more of the eighties - scents like Rumba, Poison, and Giorgio - though I think it's probably an easier wear.  I remember it being stronger in the winter, but everything becomes a bit of a whisper in the southern heat here.  The refill bottle is the most affordable purchase available, and even that is pricey.  The beaded tassel on the bottle helps soften the blow.

I like Le Labo Santal 33 better than I thought I would at first sniff.  I've heard complaints about the woody musky synthetic in the mix, about its insane tenacity, and I see that, but I see that in Ambre Fetiche too and like it there enough.  Santal is best in the beginning, where it feels most unusual, and yet when it dries down it's still better than half the stuff I smell in public.  Santal feels a little like an updated Grey Flannel to me, minus the galbanum, bergamot and sage.  Perfumer Frank Voelkl has done several things I like - Covet (Sarah Jessica Parker), Iris 39 (also Le Labo), and Ambre Passion for Laura Mercier.  All of these share with Santal a sort of tactile persistence, half way between doughy and fungal.  Voelkl has also done a few synthetic amber bombs for Kenneth Cole: Signature and RSVP.  RSVP is synthetically relentless, and Santal is like its dressed up cousin, covering it all up with a suit and a tie.  The real shock to me at the Le Labo counter was the Calone home spray.  All of the home sprays were interesting and like Dyptique's John Galliano I would happily wear them on skin.  Calone is the best.  It has the aquatic influence of Escape and L'eau d'Issey, but it punches things up with geranium and the signature Le Labo musk.  It lasts better than any calone fragrance I've tried, and while not a steal, it's cheaper, for 100ml, than the 50ml bottle of Santal.

Dyptique Olene has been around since the eighties, and though I imagine it's changed considerably since then, it still fits right in with that era's fragrances.  It reminds me a lot of Sung, and is about as much of a powerhouse, but it's kinder somehow.  The jasmine, if no more natural, smells a little less synthetic.  The indole will be a problem for some but does wonders for me.  Dyptique is discontinuing so many of its fragrances (I regret not buying the last bottle of Jardin Clos I saw) that I wonder how much longer Olene will be available.  It's strong, and lasts well.

Other things I saw and grabbed: older bottles of M de Molinard, Balmain de Balmain, Apercu, and Soir de Paris.  I think I'll eventually need to get Czech and Speake's Cuba, which the SA at Lucky Scent says is referred to as Sex and Poop.
Posted by Brian at 7/30/2011 03:45:00 PM

Cuba. OH Cuba - it does smell like poop. Sort of like poop, an old man's dentures, 20 year old newspapers and cigars. It's amazing and disgusting at the same time to me.

"Czech and Speake's Cuba, which the SA at Lucky Scent says is referred to as Sex and Poop"

Haha! I've never heard that. Now I'm thinking of the little boy character in Miranda July's "Me and You and Everyone We Know".

Wow! Lot's of interesting fragrances in this post. I'll have to read through it again to catch everything.
Yes, please-you really should buy Peche Cardinal. I love the sweet dryness of it, but I tend to wear it in the summer rather than winter. My cool, dry skin needs the warm temps to help the scent bloom. Oh! and just picking up the bottle to swirl the tassle around is SO much fun : )

I agree, Thea, amazing and disgusting. At first I thought, oh no. No no. But I had some on my wrist as I smelled other things and it really grew on me. It's one of the only fragrances I can think of where proper context would kind of stump me. Usually I'll wear just about anything anywhere, office friendly or no, but for some reason I suspect I'd get a lot of who pooped looks with Cuba.

Yes, Katie. We spent a good ten to fifteen minutes thinking of ideal shorthand for Cuba. I don't get much sex, myself (in Cuba; on Cuba; when it comes to Cuba?) but I do get a lot of poop and aftershave.

Cymbaline, I did buy it. I thought I'd lucked out from the temptation because online Luckyscent indicated the refill bottle was sold out. But I got there to the Scent Bar and of course they had it so I was practically forced to part with my hard earned cheese. Worth it, I think, and even more so in the winter, where it really steeps on the skin. For me, the heat brings out more of the coconut than I remembered from the colder months.

Good to see you went to Scent Bar, Barney's and Fred Segals. These are my usual haunts when I'm looking for that special scent or looking to discover something new. Now I feel a bit more like there's a perfume community I belong to. I also genuinely get excited about visiting these places because I've always, always have had a positive, fun and enlightening informative experience.

Hi Princess. Aside from one snooty Malle rep at Barneys - and okay, an eye roll or two from a few others there - I've had exceptional experiences browsing in LA. I've never really been in NYC and I wonder how it compares.