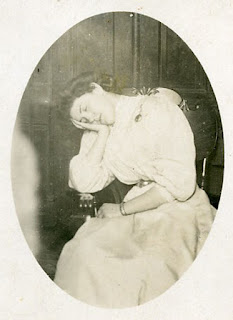 "Thank God for the bargain bin."

Yeah. I mean, I've never had access to good department-store sniffies - the best selection within two hours' drive of where I live is Macy's, with the closest Nordstrom's four hours away - but why why why are so many of the mall fragrances so DULL? And I'm not even one of those people who insists on Wild Loud Outre' Unusual in my perfumes. I do okay with Quiet and Pretty.

Yeah, Mals, I really wonder if you'd like Tamango. I smelled it months ago at the Perfume House in Portland and loved it so much I was super frustrated when they had only a tester bottle left (not for sale). So I found this one ounce bottle and snatched it up fast in Denver. I've heard the more recent versions are true-ish to the original. It reminds me very much of Rive Gauche and Calandre, but maybe a little...more subtle? Of course, my subtle is your sledgehammer.

Absolutely brilliant writing today, Brian! Perfume reviews? Experimental fiction? Whatever. But you've outdone yourself. I'm so enthralled with the writing, I don't even care about the perfumes (though I expect I'd agree with you).

Absolutely brilliant writing today, Brian! Is it a perfume review? Or experimental fiction? Maybe it doesn't matter, but I'm so enthralled with the writing that I don't care about the perfume (though I expect I'd agree with you about them).

Brilliant. Not to mention I agree with you on Bottega Veneta. I see a little bit more charm and dignity in it than you do, but not much more excitement.