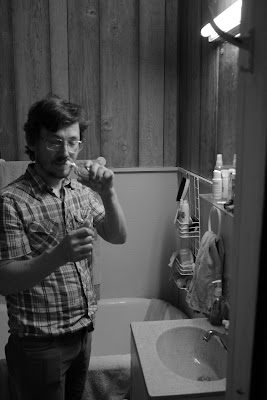 Around this time last year, I interviewed a woman about the scents the women in her family used to wear. Each of her aunts had her own signature scent. There was Dot, Baby Doll, Judy, Juanita, and Linda, the youngest. She said her aunts wore White Shoulders and Youth Dew, among other things, and together they represented what she called a "menagerie of scent." Until 2011, all of the five women were still living. Last summer, Linda was having trouble hearing and went to the doctor. Her body was riddled with cancer and she died about a month later. This summer, Dot died, leaving three.

Dot had kept up the family home in Hickman, Kentucky since their mother's death in '95. My friend, who is the daughter of the woman I interviewed, had been to the funeral and came back telling me about the place. She texted me pictures to illustrate. In the attic, there was an old Guerlain dusting powder box: L'Heure Bleue. 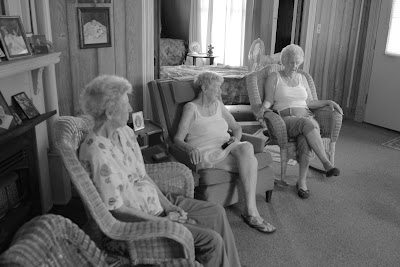 I've been wanting to make a western movie of some kind, ever since Abigail recommended the book The Sisters Brothers to me. The book was as fantastic as she'd said it would be, and instantly made me want to do something with some of that frontier mood. I told my friend I was writing a story but didn't have a house to film it in, and she mentioned this place in Hickman, and off we went with cameras and microphones to check it out.

Since Dot died, the house is just sitting there, used mainly for rare family get togethers. There are family photos all over the mantel and propped along the transoms. A sign between the dining room and the kitchen reads: "God help me to know when to keep my big mouth shut." In the small bathroom, there's a single bottle of perfume, an older version of Cachet.

The three surviving sisters knew we were coming and were at the house when we got there. They'd brought fried chicken, okra, and biscuits. There was Diet Coke in the fridge. They all sat in the living room while we took test shots of the place but it soon became pretty obvious that they were the most interesting things in the house. They talked about their memories of boys and each other and the people in Hickman. And I asked them about perfume. 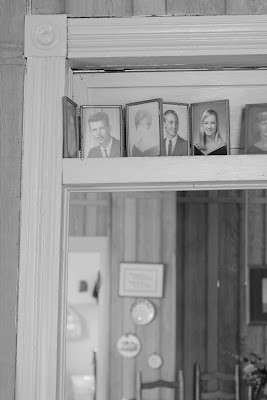 Judy told me about the time she'd saved her allowance and the money she got for Christmas, which added up to 29 cents, to buy a perfume set which included powder. I can't remember what scent it was. Like her daughter, who I'd interviewed, she recounted what all the women had worn, but their stories differed slightly. They seemed to remember every perfume they'd ever worn.

There was a Hammond organ in the room and at one point Juanita played it while the rest sang hymns. Baby Doll was eating pie out of a tin dish and started to cry, maybe because all the talk about perfume brought back memories, and she felt the absence of Dot and Linda. When we left Judy told us she didn't know why they all got so mean but she thought it was probably because there were three men present, counting me, and men seemed to do that. I didn't think they were mean and I think maybe what she meant was that they got candid in a way they worried might be unladylike. I loved that they talked freely, the way I imagine they do when they're alone with each other.

I'm still not quite sure why, but this post made me cry a little.

Being there brought back a lot of memories for me, even though it was my first time. The feel was pretty similar to houses I remembered from my childhood.