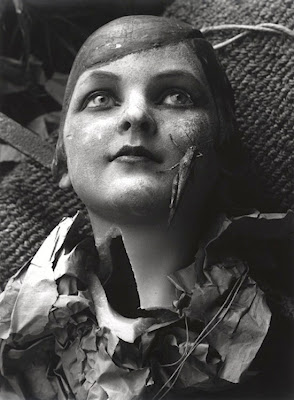 If you've only smelled the reformulation of Molinard's Miss Habanita and been led to believe it has little or no connection to its reason for being, good old smoky Habanita, it's perfectly understandable - and I feel sorry for you. Here's a good, if kind of tragic, example of a careless reformulation, where everything interesting and even remotely complicated has been altogether removed from the fragrance as initially conceived. And for what? It's hard to imagine the current version of Miss Habanita selling any better in the present marketplace than what it replaced might have.

Released in 1994, over 70 years after the release of Habanita, original Miss Habanita is one of my favorites, and the two relate to each other in fascinating ways. Miss Habanita, these days, is a densely sugared white musk affair, chokingly sweet, depressingly banal for something so relentlessly perky. Its fruits are neon jammy, and the neon is right up in your grille. Fruits have been done better, frankly, and original Miss Habanita is still around here and there on Ebay to prove it.

Classified as a fruity chypre, its take on fruit recalls Nina Ricci's Deci Dela, by Jean Guichard, which was released the same year. Deci Dela and Miss Habanita are very similar in their use of steeped fruits over a drier than dry base of oakmoss. This isn't cheery, life affirming succulence. It's darker than that; more earthy. While we're all waxing poetic over our romantic ideas about oakmoss, let's remind ourselves how the Egyptians viewed it. As Edwin T. Morris mentions in Fragrance: The Story of Perfume from Cleopatra to Chanel, it was once an essential part of the embalming process. Egyptians stuffed the cavities of eviscerated corpses with it, preparing for burial and the afterlife. Then as now, it was a good fixative; its antimicrobial properties "serving admirably in the mummifying process". When some people smell oakmoss and say it reminds them of something damp and musty, they're not too far off the mark.

Pretty elemental stuff - as opposed to, say, something slightly smooth and sweet which used to be in a lot of fragrances in much larger quantities. Vis a vis Miss Habanita, let's put it another way: someone took the peach off Mattisse's table, where it fit in with the contrived color scheme, and threw it out in the yard, where time's gotten to it and reminded you that a painting, like mummification, freezes things into a lie. The fragrance sits comfortably somewhere between compote and compost. Original Miss Habanita was a late stage reminder that at one point perfumery had as much to do with the unknown and the unsettling as smelling fancy or clean. Miss Habanita has a little weirdness and mystique in it, mixing the beautiful with the ever so slightly macabre. Listen, don't get me wrong. Miss Habanita isn't that dark. But we've gotten so used to FRUITY FLORAL meaning something much brighter and perkier and airheaded that a recalibration might be necessary before approaching what that used to mean.

Miss Habanita distinguishes itself from Deci Dela further by faithfulness to its source, a composition which itself plumbed the depths of the darker side. I wouldn't say that Miss Habanita is perfect for those who find Habanita a little much, obviously. For one thing, a Miss can get in just as much trouble as a Mrs., if not more. Ideally, appreciating one means appreciating the other. Miss Habanita isn't a refinement or a series of improvements but a way of contrasting certain aspects of the original in refreshing ways.

The moss - and some vanilla - speak to the creamy tobacco of vintage Habanita. Everything anyone might find questionable, if not entirely objectionable, is still there - the leather, the tobacco, the dirtied amber, the palest hint of decayed floralcy - and maybe even amplified in some way by bringing a certain amount of translucence into the equation. I can just as easily imagine Miss Habanita being used to scent cigarettes, as Habanita once was, and Habanita is such a dense proposition that it's easy to forget it also contained peach and orange blossom and plenty else besides, much of which reappears in its progeny to more emphatic effect.

Miss Habanita reminds me of Habanita with the lights suddenly turned up. Everybody's still doing what they were doing in the dark. They haven't had a chance to pretend otherwise yet. It lasts amazingly well, always surprising me by its persistence. It's a wonderful fragrance, full of quiet melancholy. Other than Habanita, there's really nothing quite like it.

I suggest looking for it on Ebay. I've seen it through e-tailers but the bottle you receive is not always the bottle pictured, and a simple exchange of emails with an Ebay seller will reassure you of getting what you pay for. The original formula came in two bottles, one frosted mustard, the other translucent amber. One of these is simpler in design; my favorite of the two, the amber glass, looks exactly like the famous Lalique Habanita bottle graced with water nymphs and has a glittery metallic bronze cap.
Posted by Brian at 4/13/2013 06:50:00 PM

Miss Habanita (vintage) sounds gorgeous. I'd say Habanita is one of my top 5 perfumes, so I'll have to try it. Thanks!

If you do, let me know. I'd be curious to hear how they compare for you. I wish there was more to read online about Miss Habanita. It's kind of special.

I never knew Miss Habanita existed -- or at least don't remember. I think Habanita was refo'd last year too, to mixed reviews. I'll just hang onto my old bottle, thanks. Although I think it can be too powdery, when I wear it, it always gets compliments from men (but never women , go figure). Always. Kind of odd I think.

I loved this, Brian. I have been away from all computers for a few days so I am just catching up. Glad I didn't miss it. And now, I am off to look for Miss H. XO

This is inspired me to dig out my bottle of Habanita and wear it. It is glorious. Oddly perfect for Spring. I will seek Miss Habanita out as well.

"Miss Habanita reminds me of Habanita with the lights suddenly turned up. Everybody's still doing what they were doing in the dark. They haven't had a chance to pretend otherwise yet."

Darling, I love your writing. Have I mentioned? I do. I do.

Habanita is genius but kinda not my thing - I came to sample it late, but what it reminded me of was Fifi Chachnil (itself plenty raunchy on me, like Fifi had been rolling around on a satin bed with a still-booted, tobacco-chewing cowboy) after a good decade or so spent in employment at the bordello.