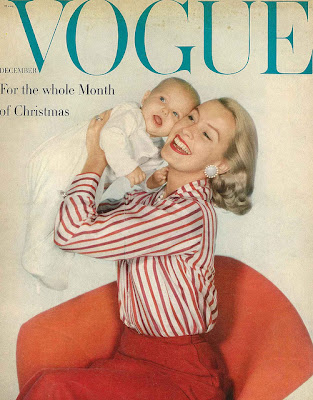 In 1969, Dina Merrill, until then regarded as a socialite turned model/actress, created a line of cosmetics in association with Coty under the name Amaranthe. Merrill's father was E.F. Hutton (When he talked, people listened). Her mother was cereal heir Marjorie Merriwether Post. During Merrill's childhood, her mother convinced her father to buy out Birds Eye frozen foods. He resisted, thinking frozen foods were a fad with a short shelf life. She insisted, pointing out that shelf life was immaterial when it came to frozen foods, and their fortunes significantly metastasized. Their company eventually became General Foods. You've probably eaten more than a few General Foods products, so you can imagine how wealthy Merrill's family was. Along with that fortune, Merrill inherited her mother's headstrong business sense, making her a logical choice for Coty. 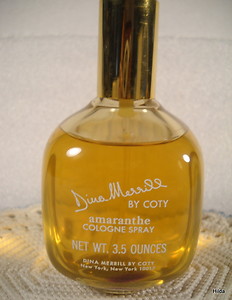 She wasn't simply the name behind Amaranthe, the way Jennfier Lopez and any number of celebrities put their names on beauty products now. Running a company was in her blood. Coty had been bought out by Pfizer in 1963, and was going through the kind of seismic changes representative of the cosmetics industry at large. Those changes required different directions, territory most recently, at the time, epitomized by Revlon. In 1956, Charles Revson had the wisdom to bring Princess Borghese's cosmetics line into his company's portfolio. Borghese was real life Italian royalty and her cosmetics were known in her country as "family secret recipes". My family's secret recipes involve cookies, but the rich roll differently, and the buying public has always been fascinated, to the point of mimicry, with the rich, which might be why cookies cost a fraction of the price on a tube of a royal's lipstick.

Revlon's move wasn't an unmotivated stroke of genius. All of the cosmetics companies were losing ground to Estee Lauder, whose higher price points and limited distribution strategies had changed the playing field. Revlon competed through its Borghese acquisition. Faberge launched the Juliette Marglen division. Max Factor purchased the already established Alexandra de Markoff line. Perfumes and cosmetics had long been endorsed by celebrities, but Lauder was something different, a sort of homespun in-the-know, hands-on magnate - what the British might call a Battle Axe, with flawless make-up on - and the success of her persona forced her competitors to rethink their market profiles - drafting not just endorsements but self styled "creator pioneers". 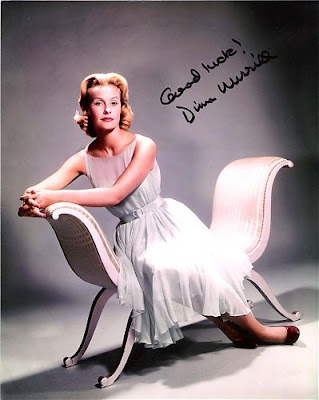 Dina Merrill wasn't Italian royalty but she was a pretty close stateside approximation, and more than Borghese she touched upon the all-American appeal of Estee Lauder. She supervised the Amaranthe line until the mid -70's, when it folded. In a People magazine article from 1980 she mentioned her frustration with the way department stores allotted floor space to cosmetics companies, calling their practices corrupt. You have to imagine she was referring in a veiled way to Lauder, who, to this day, has the kind of focused presence in department stores that Coty and Revlon can only dream of. While Coty has plenty of celebrity scents represented at the mall, you're just as likely to see its product at Walgreen's, whereas Lauder has, after all these years, maintained its uniquely exclusive, independent counter presence at Macy's and its ilk (not just through Lauder proper but through Clinique, another kind of main street apothecary-in-the-mall brainchild). Lauder had taken the model of the door to door Avon saleswoman - a neighborhood friend bearing tips and trends - and transplanted that living room experience into high end, high volume brick and mortar sales figures.

Merrill's official story differed from Lauder's in the sense she had no real "pull yourself up by the bootstraps" appeal; yet the women shared a unique persona, that of perfectly coiffed business sense steeliness. Ultimately, Merrill might have been the wrong kind of move for Coty in this chess game with Lauder. Like Grace Kelly, Merrill was perceived as a bit of an ice princess shiksa by the American public, with none of Lauder's underdog brunette chutzpah - admirable, but not exactly relatable.

Business sense doesn't necessarily imply audacity, but it did for Lauder, who was perceived in many ways as the woman next door with bright ideas and no nonsense advice. She wasn't above getting her hands dirty, which is a little different than a socialite sitting on the board of directors, high up on a corporate penthouse floor. In all the stories about Lauder you can imagine the feisty click of her fast moving heels. Merrill's are muffled by plush carpet. These aren't nearly the truths of the matter, but Lauder, famously elastic with the truth, knew better than anyone that the buying public didn't go by truth but by appearances, and Merrill's public persona was a lot more patricianly effete.

Amaranthe released one fragrance of the same name, and however lovely, it too was a bit ill-judged. Hate them or love them (I love them), Lauder's fragrances match her persona - strong willed, full of presence and drama, a little bossy, a little intrusive. Even Soft Youth Dew - until then, about the softest Lauder fragrances got - was more shrieking than shrinking violet. It wasn't really until the -90's that Lauder produced anything even remotely resembling something other than bombastic, and it's arguable that even Pleasures and White Linen Breeze had the kind of stealth you could never really misconstrue as anything other than robust. 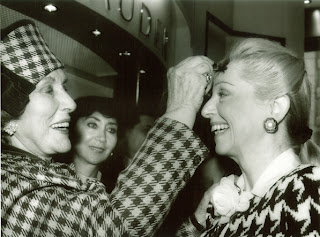 At the time of its release, Amaranthe had Estee, Youth Dew, and Azuree to compete with in the Lauder line-up. Those fragrances, even then, were slightly old fashioned - high drama balsamic, aldehyde and leather constructions. Amaranthe was old fashioned in a different way - probably closer to Coty's 1913 Muguet de Bois than anything more up-to-date in the brand's fragrance profile. Yet it was hardly outdated, unlike Lauder's output at the time maybe, and in fact more forward thinking, adding to its muguet theme a bright peachy succulence. It thought ahead to the kind of fragrance which is practically ubiquitous today, upbeat and unassuming, but executed it with far more class. Put the name Ralph Lauren on the bottle and it would sell respectably in today's marketplace, I imagine. Amaranthe isn't exactly squeaky clean, though I smell nothing anywhere near animalic in it - but far more than anything Lauder or Borghese produced, it was bright and more arguably classically all-American. It was more mid -50's than late -60's probably, but hardly -30's and -40's like, say, Lauder's bestsellers.

There's nothing even faintly sensual about Amaranthe; nothing close to dramatic. Which isn't to say it isn't wonderful. However familiar in its parts, the whole is something I can't remember smelling before the mid-nineties. Knowing anything about Merrill's persona, it's hard to imagine her approving anything else. Amaranthe is perfectly engineered to express her known cinematic qualities - more blonde than brunette, more reserved than showy, reassuring rather than provocative. In addition to the muguet and its counterpart peach theme, Amaranthe has something subtly lactonic going on. I would call it golden milky, a quality its bottle and packaging somehow reinforce.

The shape of the larger bottle resembled a peach, forcing you to hold it as you would that fruit. Its glass extends this impression further, covered in a rubbery tactile material, showing the "juice" inside - half brandy, half sunshine in color. There's the subtlest trace of high end liqueur in it, as well as whiffs of rose and jasmine, but it steers clear of deep woods and white floral indoles. It isn't in the least declarative. It's what you imagined you might smell if you got close to the face of -50's mainstays like Doris Day and, obviously, Dina Merrill herself, the peachy, good natured cleanliness America wants to believe emanates from the rosy cheeks of its young women. The bosom was left to Lauder, and the success of her fragrances, and the relative failure of Amaranthe, suggests that, however in love with the ideal of a clean-scrubbed face America was, it inevitably stooped to cleavage.

Amaranthe is almost impossible to find now. I found a bottle like the one pictured above on Ebay, reasonably priced.
Posted by Brian at 4/20/2013 01:21:00 PM

I adore older Cotys - just had a conversation about them with Blacknall Allen over on A Perfume Blog. They just grab my heart and squeeeeeeze. I DIE.

I know I've mentioned this before, but I have issues with *something* generally common to the Lauder base - as in I can be wearing something I like (Private Collection or Beautiful or Knowing), get two hours in, and start feeling hideously queasy. Just. can't. do. it. Am therefore completely irrational on the Lauder front.

Interesting history. And now there's yet another older Coty I'll have to keep my eyes peeled for...

I thought of you yesterday, Mals. In an antique store in rural Tennessee I found what I suspected might be Emeraude Parfum for a dollar. It's in a lipstick shaped bottle with a green screw on cap. On top of the cap is a gold embossed crown and some kid of insignia. I haven't looked but I suspect that's Coty's branding. It makes sense with the crown shaped caps on some of the bottles.

Anyway, it's a roll on, which seems a little odd. Odder still, the green liquid is strangely goopy, almost more like a balm than parfum. It smells heavenly and I thought, Mals is right, parfum is the way to go with this one.

Have you smelled Coty's Masumi or Sofia? Masumi doesn't really strike me as an oriental. It's a lot brighter than I expect one to be. And Sophia, also an oriental, is interesting too. No patchouli that I can detect - a bummer for me, a blessing for you, I bet. It's a sandalwood oriental. Very pretty.

I have a vague vague memory of smelling Sophia back when it was newish, probably ON someone, and thinking it was pretty but not my usual sort of thing. (I was, I am sure, wearing KL Chloe at the time.) Masumi I have not smelled.

Good lord, old Emeraude is just so lush and velvety a scent. And have you tried Chypre parfum? It also is "not-me," but the sample I got from StC just knocked me flat, and then last month I scored a half-oz of parfum on ebay for $140, and it is worth every single penny. OH TEH FEEEEELZ. I turn into a Twilight-smitten weepy teenage girl every time I wear it.

I adore Youth Dew and get compliments every time I wear it. I also love those Elixirs of the Aromatic kind! Dina Merrill always struck me as kind of hard. Not a soft, friendly blonde. Emeraude was still fantastic in the 70's, I wore it when I was a teenager. I also liked Tabu and Coriandre.

Dina Merrill. Wow, there's a piece of Americana I had no idea about. The perfume sounds quite nice.

I am irrationally fond of Estee Lauder - perhaps my favorite American entrepreneur. I've even proposed to my husband that if the next kid is a girl, we name her Esther and call her Estee or Esty. Doubt we'll go through with that, but still. ESTEE LAUDER OWNS YOU, DINA!!

Hi Katy. Yeah, I wouldn't think of Merrill as a soft, friendly blonde either. She better not have been, if she was meant to compete with Ms. Lauder. She had a real steely quality as well, but in a very different way than Lauder I think, enough to make all the difference.

Her one curve ball seems to have been her recurring character on Batman, Calamity Jan.