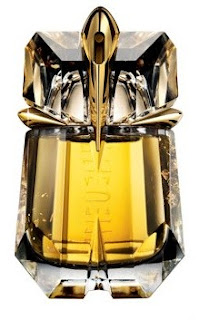 I was excited to hear about these several weeks ago, but figured they'd never reach me, so I was beside myself with glee when I found out they'd arrived at the local Dillards last Friday. I'm a fan of Alien and Angel and have been at least marginally interested in all the various Mugler flankers. The flankers to A Men have been the most compelling to me. B Men is pretty addictive. A Men Pure Malt and Pure Coffee are excellent fragrances as well. The idea behind the Liqueur series seemed intriguing. Apparently, liquor-making techniques were applied to the manufacture of these perfumes, resulting in something richer, a bit boozy, more nuanced and complex.

When I first smelled them at the counter, I didn't notice much of a difference. I sprayed them on strips and found, walking around the mall, that of the two Angel seemed to be the most divergent from its source. It still had the overall tone or olfactory profile but with a more subdued patchouli and a notable absence of chocolate. Alien Liqueur seemed practically identical to its source; so much so that I couldn't justify spending 100 bucks on it. When I got home, however, I realized how wrong I was.

Alien Liqueur is incredibly rich and lush. It lasts forever on the skin. I sprayed some on four hours ago and can still smell it, rich as ever. Like A Men Pure Malt, it was aged in an oak wood barrel for eight weeks. Angel was aged for the same amount of time in a cherry wood barrel. This makes sense, as I detect in the latter a sort of sour cherry tobacco accord, like something left to languish in a pipe. That isn't altogether unpleasant, lending it aspects which remind me of older perfumes, which get thicker rather than more diffuse as they dry down. Angel Liqueur brings to mind port wine (or, okay, cognac) and dark, aged leather, all of which I love. The first ten to twenty minutes are pretty divine, with a protracted, boozy opening.

Alien strikes a bigger cord with me. Alien Liqueur differs from the original primarily by way of depth and its treatment of jasmine. The original seemed very rich to me until smelling the liqueur version. I wouldn't say that the original is weak now, but I wouldn't say it's as decisive a perfume as I originally thought either, and believe it or not, it's certainly more transparent. I enjoy both but find the original to be much more of a sugar rush than I imagined, the jasmine caramelized in a way which seems adolescent compared to its liqueur counterpart, which bundles the flower in folds of velvety texture. Who knew I would like these two better than almost anything I've smelled lately, most of which I expected so much more out of.
Posted by Brian at 10/19/2009 10:26:00 PM

Always nice to find a pleasant surprise where you least expect it.

Okay, I'm gonna say it...I chuckled at the phrase "I wouldn't say the original [Alien] is weak now..." The new one would have to warp my nose a bit to make the original seem weak. ;)

BTW, the think that is going to really get me is the potential for another entry in my favorite game: Pairings--match a scent to a liquor/cocktail.

That bottle looks like the head of a Transformer! Or maybe I'm just a geek... or both.

How similar are these to Angel? Haven't we had enough Angel flankers by now? I smelled A*Men and Angel Men recently: nice, but, well, how many of these can the market support? Aren't they just competing against themselves? I've heard good things about Pure Malt, but know very little about B*Men. Hmmmm.

Thanks for the reviews though.
Laura M

wow this is really interesting

I've been coveting Alien for a while now and this post has made me decide, oh just get a bottle already!

Julian said...
This comment has been removed by a blog administrator.
June 11, 2010

LOVE LOVE LOVE Alien perfume! I got robbed recently and the burglars must have had taste because they stole my bottle!!! Also adore the advertisement also, beautiful images for a beautiful fragrance :)

Love me some Alien Perfume ! I also like Michael Kors perfume a lot, but it takes a backseat to Alien perfume. So expensive though...