JHL: The Secret's Not So Secret Anymore 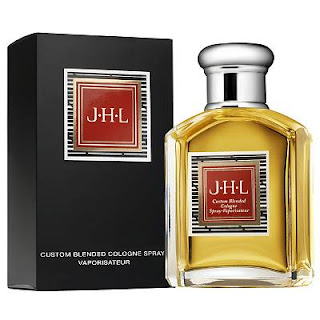 It never occurred to me back when it first came out, but JHL is, as many online have commented, so similar to Youth Dew, Cinnabar, and Opium that it could easily replace any one of them on the shelves and no one would be the wiser. Aramis has just relaunched JHL as part of its Gentleman Collection, along with Havana, Devin, and Aramis 900. I've yet too smell Havana but hear it's somewhere out of this world, too, which is saying I like JHL very much. Then again, I like Youth Dew and Cinnabar. I bought both of them sometime last year and wear them regularly. At first they seemed spectacularly feminine. Then they just seemed like something I would wear. You can find infinite scrolls of copy on those legendary perfumes, so I won't dwell on them. What I'm more interested in, really, is how somebody got away with releasing JHL as a masculine at a time when Kouros and other hairy-chested behemoths ruled the roost.

I'm also fascinated by the fact that I never saw any connection at the time. Did anyone else, or was it just me? How was it possible that Estee Lauder would even venture such a stealth move on the buying public, conflating masculine and feminine right under the consumer's nose, without concern that such a sales strategy would backfire? For as long as I can remember now (okay, a little over a year) I've been championing the erosion of gender categories in fragrance. They seem so arbitrary and bogus, mere marketing tools. Smell is democratic. A man washes his hands in flowery soap and thinks nothing of it, yet, somehow, Aromatics Elixir is beyond the limits of masculinity, no matter that it smells very similar to Aramis for men. We seem to ignore the blurred boundaries between these fragrances across the so-called gender divide as though we've internalized the segregation of scents which technically smell virtually the same.

How many men smelled Youth Dew or Cinnabar on their lady friends (mothers, wives, grandmothers, steadies, strangers) and liked it? Lauder must have done the math. By pouring Youth Dew into a butch bottle with a masculine monogrammed label (ostensibly for her own husband) she allowed men to wear what they'd already been enjoying for years. I imagine Mr. Lauder smelling Estee's neck for the umpteenth time. Oh that smells wonderful, he says. You should try some, says she. Oh no, I couldn't possibly, he guffaws. It's so feminine. I like it on you, dear. What if Estee simply poured Youth Dew or Cinnabar into a new bottle, as a little experiment. Here's a businesswoman who sold more units than the average highest-selling male. I wonder how many times she felt condescended to, as though her province were simply the house-bound lady folk. How many times was she made to feel that in a world of men she wouldn't sell those numbers? How must she have felt, being treated as if her proper place were in the home? It would certainly bolster my desire to make a point--if only for my own personal satisfaction--and I have only a fraction of her ambition and drive.

Which isn't to say adjustments weren't made to the formula. The truth is, there isn't much difference between JHL, Youth Dew, Cinnabar, and Opium--how else would the experiment work, otherwise? But there are subtle adjustments. JHL has the faintest whiff of fir, a certain strain of alpine airiness moving through its structure. Michael Edwards classifies it as "aromatic--rustic", whereas Cinnabar, for instance, is listed as "oriental--spicy". Both have rose, cinnamon, and carnation in their hearts. Both open piquantly with a zesty spritz of orange. JHL replaces Cinnabar's incense with labdanum, adds pimento up top and the fir note instead of jasmine, which makes a far subtler adjustment than you might expect. It might also be that Lauder wanted to show in some way how little distance there is between making a so-called feminine into a so-called masculine. Baby steps, really. It certainly would have shown that knowing a thing or two about women was in some ways knowing as much about men. Was Estee Lauder this avant-garde--the Marcel Duchamp of perfumery and cosmetics? If so, don't count on anyone giving her credit for it, despite the fact that Devin is a dead ringer for Aliage, and Aramis 900 just a hop skip and a jump removed from Tuscany per Donna.

I received a bottle of JHL in grade school, and couldn't have been happier. I liked it better than any cologne I'd ever smelled, and wearing it was vaguely confusing, because I generally had no taste for male fragrances, certainly far less than I do now. For years I'd hung out at my mother's bureau, enjoying her aged bottle of Youth Dew in secret. I could never put it on. I couldn't risk letting anyone smell it on me. I had to absorb the smell mentally and store it in my head. I was so conditioned, so programmed by social codes and mores, that when JHL came along, I had no idea I was finally able to bring my love of Youth Dew out into the open. It was still a secret, even from me.
Posted by Brian at 10/22/2009 10:43:00 AM

We are living parallel lives! I feel exatly the same way about Youth Dew. As a boy I always secretly loved it. Thanks for such a delightfully insightful blog. I look forward to everything you write and sniff.

Which is why I tended to lecture the poor underpaid staff at the fast food establishment that would ask, in response to a request for a Happy Meal: "Boy, or Girl toy?"

Arrrrrrgggggggh. My children had dolls ("representative humans") and tools. Both. Doesn't matter what gender they are.

Now, some sniffologist is going to come along and explain how pheremones and y chromosones and blah blah affect sniffage. Quite possible. My own fluctuating hormones can, I know that. But this issue has everything to do with potential and psychology: can't we set it up so that individuals can determine their own boundaries? Social cues are so blasted powerful; wouldn't it be nice if we could erase them?

Yet, I recognize simply putting all perfumes in identical bottles with names like A-5 and H-22 won't do, either. We tend to like a little story, a little suggestion. And we like design. (We just have different tastes...chunky bottle or fluid? Bless Annick Goutal, who offers one of each.)

Aw, what the hell. How about we call a perfume Fracas, and let whoever wants to start one wear it?

Thanks for hepping me to Devin, btw; cheap as Alliage is, relatively speaking, perhaps I can find Devin even cheaper. And love it just as much. If I should perchance find myself having trouble with a rugged masculine name like Devin, I'll call it Lola.

A provocative--and touching--post. As good as a short story. Thanks!

I actually prefer Aramis to Aromatics Elixir, it's got a slight twist to the formula which removes the 'off' note I get in the latter (even in a new bottle). And it's sexy as hell.

Now I think I'll sniff the other Aramis offerings on my way home tonight. You enabler, you! ;-)

I was the "other" side of the equation - I bought a bottle of the very first-released JHL for my husband because I adored the way it smelled on him. After about 2 months, I started wearing it instead of Opium or Cinnabar because they were too "flowery" for me. My husband loved the way I smelled in it as much as he did!