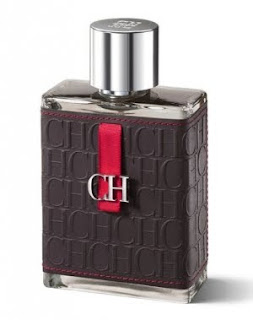 I'm glad I gave this one a chance, because when I first smelled it my nose was probably exhausted, and it barely made an impression. It seemed to be one of those dread skin scents, the kind that whisper across your skin like the sound of a leaky faucet somewhere in the building. I'd been at the mall for an hour probably, shocked I could spend more than thirty minutes there. I was smelling perfume at the Russian kiosk, which is located smack dab in the middle of the place. I hadn't visited in a while and there was catching up to do: Michael Kors Very Hollywood, Shiseido Zen for Men, Queen Latifah, Marc Jacobs Lola, Cacharel Scarlett. They'd just received a shipment, too, so I was hanging around to see what might have come in.
Among the new arrivals was CH Men, and my first impression, based on the packaging, was that someone had put some time and thought into the thing. The bottle is one of those that make people who love fragrance happy: a big block of glass, half of which is covered in embossed leather. CHCHCHCHCHCHCH. It feels great running under your fingers. A metal CH pendant has been attached to a deep red grosgrain ribbon and knocks against the leather like a little drum. Still, after CH Women, whose bottle was tricked out in the same bells and whistles, I wasn't expecting much. Too bad, I thought, after spraying CH Men. What a shame the cologne doesn't carry the same weight as the overall first impression.
The sales assistant assured me that something was there, but I couldn't smell much of anything on my wrist. At first I was reminded of Black Phoenix Alchemy Lab's Zombi, with its dirt, rose, and violet notes. That was pretty thrilling. Would a mainstream masculine really make something that smelled of moist, flowered soil? Who could say. It was certainly gone before I could. Weirdly, as I looked at other things, I kept getting faint whiffs of that first spritz, convincing me that maybe I just couldn't hear CH through all the cacophonous Friday night noise and the bombastic tuberose of Very Hollywood. I bought some and brought it home. Just in case.
I'm glad I did. CH does indeed smell like damp earth and flowers, with some spice and stewed fruits thrown in. The notes are listed as mandarin, bergamot, grapefruit peel, saffron, nutmeg, jasmine, violet, wood, ambergris, vanilla, moss, burnt sugar and leather. I smell none of the first three, nor vanilla and ambergris. The impression of soil must be created by the saffron and violet, I've decided. Jack Black Signature for Men has a heftier dose of saffron and smells only vaguely similar. There the saffron is coerced by cedar into traveling in a very different direction. I smell date, too, but nothing in the literature for CH confirms this.
CH Men is the best mainstream masculine I've smelled in eons. It isn't a skin scent after all, though it doesn't exactly scream its way through a room. I wouldn't call it subtle, but I'm not going to accuse it of grandstanding either. I find it pretty addictive. There isn't a marine accord to be found. There's no patchouli, clean or otherwise. No cardamom. The leather is somewhere in the background, complimenting the violet and saffron in ways which bring to mind Serge Lutens. CH Men, unlike its feminine counterpart, isn't aiming to be all things to all people. It's wonderfully idiosyncratic, and this too places it in the company of niche lines like Lutens, Etat Libre d'Orange, Diptyque, and Parfum D'Empire, among others. Any one of these might have produced CH Men. It's more likely than Carolina Herrera. Then again, I'm a big fan of Herrera for men, and once I study it, I see a link between that fragrance's use of immortelle and the employment of saffron in CH. Like Herrera, CH has good longevity. It smells nothing like anything in the department store, which is, alas, probably why you won't find any there, short of a Russian kiosk.
Posted by Brian at 10/25/2009 10:37:00 AM

I've been poo-pooing men's fragrances (especially the new releases!) for so long, I had completely forgotten about the men's fragrances I LOVE in my collection.....and I've been craving them more then ever. L'Instant Extreme, DK Fuel for Men, Divine Sage, Domenico Caraceni 1913, Winterstar (although I think Michael Storer considers this a "unisex" fragrance), Dior Homme Intense, Knize 10, Black Aoud (wait.....I don't think Montale genderizes their fragrances either....), and Sables. Abigail's recent posts about Le Labo have me champing at the bit to try Oud 27 too.

I'm not sure where to find it, Marko. You might google it online. I was surprised to find it at the Russian kiosk, frankly. I haven't tried half those things you mention. Winterstar sounds interesting. What's it like? And Sage. I've read about that before.

My friend was in town recently and had a sample of oud 27. I didn't know this. At one point she was sitting in a big hall where we were working, with very high ceilings and a wide walkway, and I breezed past her and--stopped dead in my tracks. I've never done that before. What the hell IS that, I asked, backtracking. So oud 27 grabbed my attention. Sadly, I didn't get to spend any time with it myself.

I'm looking for something new and interesting for my boyfriend, and this sounds great! :) I might be tempted by it myself.

Winter Star, on me at least, is an interesting skank and caramel rice pudding fragrance. The civettone (very fecal) is strong enough to resinate amongst the caramelly-musky goodness from first spray all the way to the dry down. Although not listed as a note, there is a touch of spearmint in the composition that keeps the "ass" smell from over-powering the fragrance and keeps the sweetness of the caramel in check. There are also moments when the fragrance reminds me of the smell that emitted from my mother's purse when I was a child - sweet, leathery, human and minty. There is also something about this fragrance that makes me slightly nauseous - strange, I know - but you know that feeling you get after a HUGE Thanksgiving meal and you're so full you feel a little sick? Winter Star gives me that feeling!

After reading what I just wrote, I'm not so sure my description is making the fragrance sound all that appealing - but trust me, it has grown to be one of my favorite "winter" fragrances (I think we have both declared that we are NOT "seasonal" perfume wearers, yet it has never even crossed my mind to try this in the heat of summer.....hmmmmm, maybe next year....). In fact, I'l probably be ordering my second bottle of Winter Star sometime soon - and it will be the first time since I stated collecting that I've actually used a bottle in it's entirety!

Michael Storer offers samples for all his fragrances as well as personally answering just about every email and inquiry - and he seems really nice to boot. I hope you get a chance to try his stuff - I'd LOVE to get your take on Winter Star.

I love the look of this bottle alone -- perfect for gift giving!

I work at a CH Carolina Herrera boutique and actually CH Man is still not available for sale here in the US, hence, the reason you cannot find it. It is only available in Europe and Mexico, but as far as I know, it will be here in US this summer!!!