And the wait is over: L'Artisan Havana Vanille 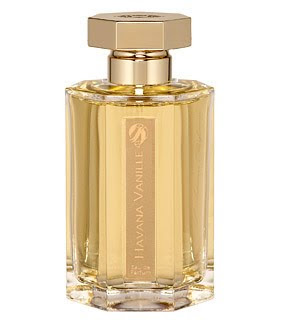 Man, it took long enough for this stuff to show up! I pre-ordered Havana Vanille in August and just received it Monday (12/21). I admit that during this long wait I became thoroughly disenchanted. I’ve been reading very negative posts on MUA & POL and I became less and less interested in it ever gracing me with it’s presence. Many noted it’s lightness, suggested it was fleeting, thought it smelled like something wet and moldy. Now that I have my bottle I gotta ask: what on earth are you smelling out there? Havane Vanille is simply gorgeous.

I’ve been wearing Havane Vanille for two days. One thing is for sure; this is not a fragrance you can judge based on a dab from a 1 ml vial. You need to spray HV – and I mean several big, bold sprays of it. Today I scanned MUA and read a post by DorothyEm where she wrote this in response to someone asking how to make L’Artisan scents last longer:

DorothyEm: “I read a post on another board from a L’Artisan representative and he suggested that you spray enough so it "pools" on the skin. In other words, spray liberally and enough to make your skin WET.”


It now occurs to me that I should do this will all L’Artisan fragrances, not just Havana Vanille. Maybe I should be ‘spraying myself wet’ with Annick Goutal, Chanel and Jo Malone, too. Just a thought. Anyway, back to HV. The fact that I wasn’t particularly interested in Havana Vanille ever showing up combined with the second fact that I don’t get excited by vanilla fragrances in general makes me recommend HV highly. Or perhaps this means HV is a vanilla fragrance for those who don’t care for vanilla scents. Case in point: I love Guerlain Spirituese Double Vanillle but this is perhaps the only vanilla I go crazy for and I wear it about 3-4 times per year, usually when I’m on a diet or when the weather is frigid and I need to olfactory equivalent of a big down comforter. My taste in vanilla scents pretty much runs toward ambery woods and not straight vanillas at all. My favorite ambery woods are Givenchy Organza Indecence (amber, cinnamon, and woods, woods, woods), Theorema (clove, orange, spices, and woods, woods, woods), Annick Goutal Ambre Fetiche (gorgeous ambery woods), Serge Lutens Rousse (cinnamon & woods) and Parfum d’Empire Ambre Russe (decadence bar none). So, as you can see, vanilla fragrances are pretty much not in my collection (well...I really dig Cristobal by Balenciaga and I think of it as a highly vanillic oriental). But, in general, I prefer ambery woods. So, if you are like me, you might also love Havana Vanille.

Havana Vanille begins like an after dinner drink heavy on the booze, specifically rum, and it's a very dark rum. Think of something along the lines of a Black Russian or Baileys Irish Crème. Something thick, boozy and spiked with milk. I might be hallucinating but I also smell something like almond liqueur – along the lines of Frangelico. Havana Vanille transports me to a dark retro lounge with me draped in the corner leather booth and, yes, on this occasion, I'm smoking a cigarette (maybe even a clove cigarette, it’s been years, give a girl a fantasy indulgence). Havana Vanille simmers down and loses it’s gourmand quality once the rum note dissipates but it never leaves entirely. Once the rum simmers it becomes a veritable spice fest; clove, cinnamon, nutmeg, dry smoky woods and burnt sugar. I know there is tobacco here but it’s so mild mannered I can’t pick it out. I can’t say I smell anything that resembles straight up vanilla, or vanilla as I know it in perfumery, and this is likely why I enjoy HV so much. To me, it smells like the idea of vanilla, and those I asked to smell me the past two days did not say I smelled like vanilla (fyi: they said I smelled really good, but didn’t know what it was). I don’t find much resemblance at all to Tom Ford’s Tobacco Vanille, which is good, because I’m not a fan. I think of Havana Vanille as a love child, a result of the coupling between Guerlain Spirituese Double Vanille and Givenchy Organza Indecence. It’s a blessed child – born from good parents. If you like ambery, spicy woods as I do, you ought to check out HV.

Hm, I think I'll have to give this another try. I got to smell it a month ago by accident and once it hit my nose, I decided against it -too boozy sweet and strange but since I smelled a lot that day, I didn't wait for the drydown which sounds much better.

Beautiful review, Abigail. I'm not a huge fan of Ford's Tobacco Vanille, either, and I'd read comparisons of HV with TV, which instantly turned me off.

But now I'm curious, especially as Duchaufour's Al Oudh turned out to be such a pleasant surprise.

And yes yes yes to the "spray til wet" concept. I think I've said this before (though probably not here), but I want to bang my head against the wall when I hear people complain that a fragrance only lasts five minutes when they've barely put any on.

I too am not a vanilla perfume fan, but this, this, this sounds heavenly! Off to L'Artisan it is! (I am still awaiting the Gucci and Theorema your powers of persuasion convinced me to get a couple of weeks ago!)

Speaking of L'Artisan though... have you heard anything about La Chasse aux Papillions having been reformulated? I've been buying it for eons, and the last 2 bottles have been distressing -- I can't smell the juice! It literally feels as if my nose has been anesthetized by one of the fragrance ingredients (I KNOW there is a fragrance there, but I am being prevented from smelling it in its fullness). I still have the dregs of old bottles, and can smell those perfectly well. I cannot tell you how upset this is making me... I love linden, and it is one of my favourite spring scents.

If I knew which year the change was made... Do you have any information by any chance?

Interesting review, I have only tried HV from a small dab vial and that way it made me quite dissapointed. But I can´t stop thinking about how it will turn out if I only spray it on instead, because what I am afterall smlleing, is both gorgeus and interesting. This means I guess that I have to get me a spar sample of it.

Oh, yay! I too have been reading the "meh" reviews of HV and wondering if I was actually going to like that split I already paid for, unsniffed.

I DO like vanilla (Shal Lite, Vanille Tonka, Emeraude). And amber (31 RC, Alahine). And woods woods woods (Dolce Vita, Bois des Iles, Parfum Sacre, and Org Indecence). I *liked* the TF Tobacco Vanille, but I found it kind of... dull, nice but no sparkle.

So now I'm excited about HV again, and you have my thanks!

Great review. But Frangelico is hazelnut. :)

YES! Am getting ready to collect my thoughts, too, but my portion of Havana Vanille arrived yesterday, I spritzed the back of my hand wet (mail came late, so the usual suspect patches were taken), and I really kind of dug what was coming my way. Through the night. And I think you are on it with booze, though I'm going to have to do some pairings with rum AND bourbon to see which wafts what... ;)

Nice review, though I am still not feeling Havana Vanille. Not my style and your description helps confirm that. Thanks!

Maybe I've been holding the atomizer too close to my skin, but I always get "wet". I'm not a huge sprayer, either, maybe doing 3-4 for an EDT, depending on the scent.

Ines,
I do think it's good enough that you should give it another shot. Remember to 'spray yourself wet' and let it settle in for at least an hour... the first 3 minutes are super boozy so perhaps don't sniff until minute 6.

Nathan,
Yeah, Tobacco Vanille is just blah for me. And too sweet.
Similar to Hermessence Ambre Narguile I just don't get all the love for TF TV and AN...
If you like the other fragrances I described in this review you might give HV a shot.

Monika,
re: La Chasse - I'm not sure but I'll do a bit of research and see if I can found out. One thing is certain, do not get the EXTREME version of La Chasse. This is a completely different scent with added pepper.

Rebella,
You might try spraying - it could make all the difference ;-)

Kathy,
And all my life I thought Frangelica was almond liqueur! Thanks for fixing me :-)

ScentScelf,
This is the first L'Artisan I've really enjoyed in awhile. I like Voleur de Roses and will try the 'spray myself wet' thing - to see if I like it even better and esp. to see if it lasts. I also love Mimosa Pour Moi in the summer. Oh, and Iris Pallida and Fleurs d'Oranger and Safran Troublant (but I think I prefer DSH Cimabue to Safran). Anyway, I ramble...it just making the mental note to myself that I need to spray more of everything I love from L'Artisan.

Moongrrl,
well, it's always good to have it confirmed that something is not your style and you can simply forgettabout it! (my NJ years assert themselves occasionally).

Hi, I am not a regular visitor to your blog (in fact, I just found it through google), but I would like a request on a review for Calvin Klein's CKIN2U perfume.