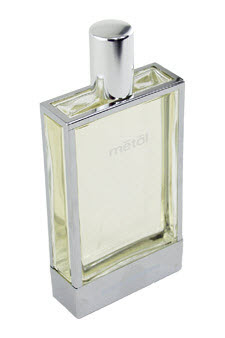 I happened upon Paco Rabanne Metal about 7-8 years ago in a discount bin at either Marshalls or TJ Maxx for around $25 bucks. I was clueless to what it smelled like. I think, at the time, I was confusing it with its far more well-known friend, Paco Rabanne Calandre. In my mind Calandre was something to have, and finding it for cheap was a completely sane, justified, unsniffed purchase.

I brought my bottle of Metal home to open, sniff and to eventually cherish. For at least a year I still thought I was wearing the more famous Calandre (I had the names confused) and at this time we didn’t have all the online resources for looking up fragrance names and notes like we did post-2005). I was wearing and loving Metal back in the dark ages, before I even knew who created it or could have read reviews written about it (though there are hardly any at all to this day). Eventually, after finishing one bottle of Metal and then purchasing a second, I was able to look it up online to discover I was in love with a nice Paco Rabanne fragrance, for sure, but it was not the more famous one called Calandre. Of course I then did a whole exercise in discovering all the Paco Rabanne fragrances, several of which are phenomenally good for such unknown fragrances. And, I’m pretty sure I read that Calandre was discontinued last year, much to the sadness of many who love that fragrance. Nevertheless, as good as Calandre is/was, my heart will always belong to Metal.

Metal was created in 1979 by Robert Gannon. I was 8 years old in ’79 so have no memories of it back then nor do I recall ever smelling it on anyone else in the 80’s. I was raised in a non-perfume-wearing family so it wasn’t until high school when all my girlfriends were wearing Poison, Loulou, Beautiful and White Linen that I started sniffing fragrance on others (oh, and the boys were wearing Polo and only Polo). I don’t recall smelling anyone wearing Metal in my life until that day in the early 2000’s when I picked up a bottle unsniffed. Smelling it now I’m astonished that it was created in ’79 because it seems so modern. Maybe the Metal I’ve come to know is a reformulation and this isn’t how it originally smelled, back in the disco and punk era when it launched. Even so, even if I am smelling a complete reformulation, I love it just the way it is.

For comparison’s sake, the most obviously similar fragrance, which almost everyone has sniffed is Chanel No. 19. Metal pays some tribute to Chanel No. 19, however, I don’t find it to be a derivative copycat at all. While Metal & No. 19 are both green chypres, Metal is brighter, more cheerful and effervescent, while No. 19 is a more subtle, serious, and steely confident iris.

The nose behind Metal, Robert Gonnon, also created Cacharel Anais Anais, O de Lancome and Sikkiim for Lancome. I can smell some similarity between Metal and O de Lancome with Gannon’s fresh and liberal use of galbanum in both fragrances. And both O de Lancome and Metal have a similar woody, green, unmistakably chypre feeling dry down. Metal starts off so bright it’s almost as if I’m spraying myself with a grin. It begins with bergamot and galbanum in spades and this is the really green almost bitter sort of galbanum that I love. I found a list of notes at Fragrantica, and these somewhat give you an idea of the scent (though I admit to smelling nothing along the lines of peach, maybe a dash of lily of the valley instead):


It's namesake may be Metal but there is nothing metallic about this fragrance. It’s a dry, green, woody chypre. In fact, I find Calandre to smell more metallic than Metal. The bottle is very near identical (if not actually identical) to the Calandre bottle. I love these simple, streamlined, modern architectural type bottles. They seem beautiful and masculine to me.

When everyone else is hopping up and down about the latest Lutens, L’Artisan or Duchaufour, I have more fun and find more enjoyment when writing about scents that are unequivocally great, but never mentioned, and also inexpensive. Just like films and restaurants and many other facets of my life, I tend to love the sleeper gems the most, I’d say.
Posted by Abigail at 8/19/2010 06:45:00 PM

I'm glad you wrote about this brand. I have a small bottle of La Nuit (rose leather)which I think is just a kicker. Why can't they make stuff like this nowadays? So it's led me to wonder what I'm missing in the Paco releases. Sounds like this one is also a great one.
cheryl

Preach it sistah Abigail!
We loves the underdog, they are worthy of our praises.<3

Speaking of, I need to try this-
Bright, woody chypre that doesn't cost me and arm and a leg and not everybody and their mama is wearing?!

Thank for this review!
I bought big bottle of Metal blindly at discount site and its bottle shapes remind me... Calandre :) I was surprised to discover that Metal is quite different and almost unknown scent. Then I found that Metal is also interesting as nice example of rose oxides usage thanks to BoisdeJasmin.
I hope Metal will be weared, it is too good to forget it.

I agree. It's so much more fun to discover lost gems (and so much easier on the wallet too.) I'm not much a fan of Rive Gauche -- have always found it to be too cold and metallic on me. But Metal sounds really interesting. Thanks for the tip!

Just when I think I don't need another chypre in my collection, I read a posting like yours and I figure that my life would be more complete with just one more bottle.

I just hope I can find a bottle... these lesser known gems tend not to get carried much by department stores.

I have a sample of this and it's such a lovely perfume!! I never hear anything much said about it online, it's definitely a hidden gem.

In my quest to find a signature perfume, of which I gave up on right away because there are too, too many great scents to always wear one, I've been taking notes to discover and buy what I really really like. Metal has been a chypre point of reference for me since it's one of my earliest and most pleasant perfume memories. I have a blurb in my notes that says the following: Ormande Jayne, Woman - Sweet floral, bitter, hay, powdery, metallic. Masculine-ish. Reminds me of Metal perfume. Nice.
Thought I'd share a thought, a memory, maybe a modern reference.

I bought a bottle on the basis of this and other reviews but I find it too similar to Calandre and Rive Gauche, which are not for me. Would anyone like to do a swap with something? attarj at gmail dot com. I live in London and would post to the UK.

I just received a miniature of this. It's exactly what I like in daytime fragrance: a sunny green chypre. It smells like quality. Not synthetic, not soapy, not chemical. Not smampoo. Not fruit-o-licios. I'm reminded of Infini, here.