Spinning Plates: The Latest, the Newest, the Bestest, and More! 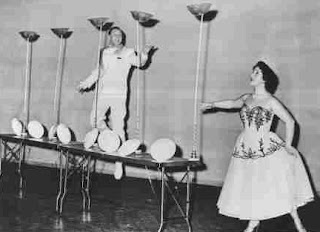 Brian, I love this post - it's real and thoughtful and it resonates with my own life. I, too, begin too many projects and some end well, some don't.

Thanks for your honesty.

I, for one. would trade one flash of inspiration (and this blog sparkles with them) for any number of the boring press releases that sometimes infiltrate other blogs. If one of your spinning plates crashes every now and then, it just makes it clear how amazing it is that the others are still in whirling motion.

I have no idea who you are in the rest of your life, what books you have written or what movies you have made. It would be really interesting to know how all of that relates to what you are doing here. But even without your explicitly making those connections, it's clear from what you write on this blog that you have a very rich frame of reference. I'll keep reading.

Brian it will be OK.

You can do whatever you set your mind and heart to because were humans.
Just flawed , fucked up, beautiful humans. It doesn't mean people will respect what you put out there to the world but as long as you do then that's what matters. It could all be gone tomorrow and you can't take it with you. Be the best person you can, that will always be enough for the ones that you love and that love you.

Hi Brian.
I don't read the perfume blogs for the newest, greatest, bestest. I'm not overly influenced by marketing media -- in fact, it's usually that marketing blurbs will send me scurrying away.
However, I am intensely interested in conversations and ruminations about fragrances. I am fascinated by how fragrances reach a fundamental part of our being - how they can transport us to other places - how they can enhance moods, optimism, self-confidence, and how they are simply pleasurable. I love perfumes and I enjoy being exposed to the thoughts of like-minded people.
That's why I read this blog regularly.

I agree strongly with Kathryn's statement above.
I adore the "sparkling and inspired" writing here on this blog. You and Abigail are talented writers and I love to read what you write.
If you continue to write, I'll continue to read. Deal?

All we can do is the best we can do. Frankly, there is no excuse for someone to ignore your email. That's just rude, whether they want to participate or not. I do wish you luck.

Hey everybody! Thanks so much for responding. I guess we are just basically talking about life, right? And it's busy, no matter how you approach it. I find it harder as I get older to stay focused, which could be part of my dilemma. That's really only happened in the past year or two. I worked hard to get where I am in various ways, as we all do, and I think for me the huge thing is slowing down just enough to enjoy it. If not now, then...when? What's the end point? And if I'm not enjoying it that's something to look at too. Generally, I'm enjoying it, but the drive to be busy is a curious thing, and lately I really want to step back and work harder not at simply being busy but at making sure the things I've started progress in meaningful ways.

Kathleen, she did respond! She's fantastic, really. That's another thing: we're all busy, and we expect instant answers. Again, what's the rush? But I do want to make sure, again, that someone knows taking the time to communicate with me is worth the effort, that they aren't just grist for my busy busy mill. You know? So I appreciate the skepticism. It helps keep me humble--which is a big task!

I continue to be truly grateful for the awesome readers we connect with here. I keep telling people out in the world, when they express surprise that I'm so into and write so much about perfume, that they have no idea. They have no idea how smart and savvy so many perfume lovers are. It amazes me. It's been one of the coolest things for me--more than writing, more than filmmaking. That connection is pretty fantastic and finding that kind of network is priceless.

Brian, it's posts like these that make me keep coming back to this blog. Well, all your's and Abigail's posts really, but these honest, introspective ones really resonate with me. Probably because in some way I can very much relate.
As in, it could very well take something as seemingly minor, like your example of not getting a reply to an email you've sent, to set me on a tortuous path of self discovery!
I often wonder if anyone else internalizes and examines one's self, behaviors and motivations as much as I do and have since come to the conclusion that most probably don't. They just blissfully march through life most times completely and happily and consciously unaware of how they are perceived and who they are. I often think that would be a great way to live!
Maybe this particular person is away on vacation, or just too busy with heaps of other stuff or maybe they DO think you don't finish projects and therefore didn't bother replying. But, whatever the reason, why care? Keep doing what you're doing (you're obviously extremely good at it), keep throwing out all your zany ideas whatever comes of them and of course keep posting!

Good post--I am just catching up after being away and then being ill for a few days... My interest in fragrance waxes and wanes but I do enjoy a good read. By the way, and not to rub it in, but did you ever send me the Laura Ashley L'Eau you promised?

No, Cupcake! Thanks for reminding me. I made the decants and put them in my bag and forgot about them until you just mentioned them. Case in point.

Brian, what a great post; you put into words what I have often felt. I want my own writing to be something that people really think about, or at least enjoy. I have been feeling anxious about being "behind" on things because I was offline for a couple of weeks due to a dying computer, and this post made me remember to take a deep breath and not try to rush things as I get back into the swing of writing. I don't want to put something thoughtless out there just because I "have" to!

Brian, I so agree with you. The perfume world and its inhabitants and beautiful fragrances have become an alternate creative world for me, and I want to contribute something to it that increases people's pleasure and appreciation of what's here now. I am constantly pleasantly surprised at the level of engagement and the quality of the writing and the humor I find on the perfume sites.