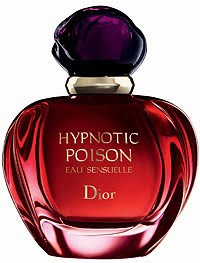 Just gaze at this bottle. I do all the time. I love Dior Poison bottles, all of them, and I like to group the whole set together on an antique claw-foot circular mirror atop my dresser. I don’t think the Dior Poisons are the best perfumes of all time, although the original Poison cannot be ignored, and I wore the heck out of the original Hypnotic Poison back in the late 90’s, well before I knew Annick Menardo was a big deal. But above all else I’m smitten with the Dior Poison bottles. The newest flanker, launched in 2010, called Hypnotic Poison Eau Sensuelle (HPeS) is my favorite of all the Poison bottles. It’s a thing of beauty. I love the heft of it, the way it curls into the palm of my hand, somewhere between feeling like a forbidden fruit and a paperweight. For me, the bottle alone is worth owning, no matter what the juice smells like. I know that’s blasphemy, but I trust you won’t judge me. 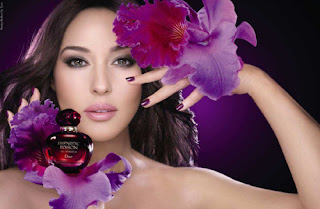 Monica Bellucci is one sexy lady, no? I love that Dior used Ms. Bellucci for the HPeS campaign because she’s not blond and she’s over 30 and she’s amazingly sexaaaaay. The Dior ads also focused on orchids, purple cattleya orchids, which I used to have in my enormous orchid collection back in Jersey when I had a sunroom for them. The vast majority of orchids are entirely unscented, but the cattleya, the purple flowers feature in the ads, have a trippy sort of sweetness that’s probably the headiest of all scented orchids. Ellen Covey are you out there? Since you are an orchid grower and perfumer I’d love for you to weigh in here and let me know if you’ve smelled HPeS and whether you think it smells like cattleya orchids. 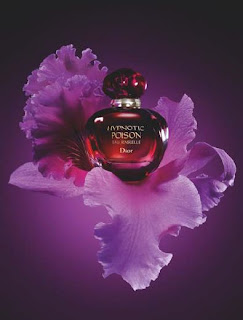 So, add together the gorgeous HPeS bottle, with the purple cattleya orchids and Monica Bellucci and they simply had me. Of course I bought it unsniffed.

What does it smell like you ask? Does it really matter? Yes, of course it matters….( I mutter). Here’s the quick and dirty description: take original HP and keep the almondy/vanilla base but envelope it in an orchid/jasmine/ylang type floriental with a more prominent ambery/vanilla vibe. HPeS is easily recognized as a relative of original HP but it has more floralcy and it’s less sweet and oddly it’s mellower. I loved the original HP from about 1998-2004 but then it started to wear too sweet and plasticky on me. I’m not sure if I changed or if it was reformulated but I still can’t wear original HP for an entire day without wanting to wash it off and change about 90 minutes in. Original HP is a nice memory for me but something I’ve grown out of. HPeS, on the other hand, is something I’ve been able to wear numerous times this past winter. It feels familiar, because it’s a cousin of original HP, but after an initially sharp medicinal floral quality HPeS settles down and becomes a pleasant almondy floriental skin scent. Is it groundbreaking or astonishing? Nope. But is it nice enough that I’ve worn it several times, enjoyed it, and still love to stare at the bottle? Yup.

I've read that HPeS will not be distributed in the United States. Same with another HP flanker, called HP Elixir, these are Europe-only launches. No matter, this past week I see HPeS available at some of the online discounters such as FragranceNet...so it's around.
Posted by Abigail at 3/11/2011 11:33:00 PM

A sales assistant wanted to introduce me to Eau Sensuelle the other day but I said no thanks - I thought I had enough Poison in HP the original. Now, of course, I will go back with my tail between my legs and ask to try it :-)

I found the original Hypnotic Poison lovely on others, but somehow wrong and rather unbearable on me. This one struck me much as it did you, it seems; recognisably Hypnotic Poison, but easier to wear. It's not really my style, but I enjoyed trying it, passed on the sample to someone else who enjoyed it as well and if someone handed me a bottle, I'd probably wear it. It's well done.

Abigail, I generally avoid flankers, so have not smelled HPES. Now I'll have to get a sample and see what it smells like and weigh in on the Cattleya question.

I think orchids' reputation of not having a scent is due to the fact that most casual orchid growers are only familiar with the supermarket hybrids that have been bred for size, color, and rapid growth at the expense of fragrance. I grow mostly orchid species, and these "original" orchids have a mind-boggling variety of scents that are all over the olfactory map, including some places we really wouldn't want to go with a perfume. Even Cattleyas have a wide variety of scents, all of them pleasant.

Email me your address and I'll send you some. I'm thinking at this point that it doesn't smell like true cattleya orchids but they thought the flowers looked pretty in the ads as well as the term orchid could also mean vanilla...
But I'd love your take!
x
A

I do find that HPES has something cattleya orchid-like about it, as does its parent HP. I think it may be a little more obvious in HPES, though. I wrote a review of HPES on my blog, but thought I should add a comment here, too, even though it's really late. Thanks again for the sample!