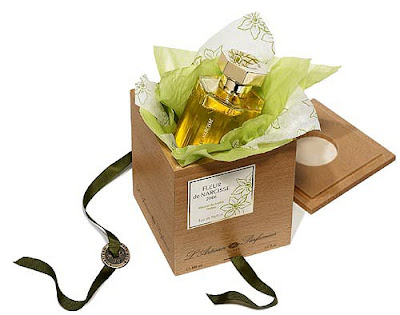 For those who have moved to another state, another region or a different country do you sometimes have nostalgic moments when you remember so fondly an aspect of your former location? I’m originally from the northeast, from New England and now that I’m in the southwest I have been missing the gorgeous unfolding of a northeastern spring. I also miss the spectacular foliage during autumn in Massachusetts, Maine, New Hampshire and Vermont, but there is an equivalent yet different beauty watching the Aspen trees in the mountains of New Mexico turn into a blanket of pure gold. The spring, however, is not true spring in the southwest, or at least not my definition of spring.

I have been craving the smell of spring on the east coast immensely. So much so that I’ve actually learned to adore a fragrance that I once didn’t like at all; L’Artisan Fleur de Narcisse. When I first smelled Fleur de Narcisse, many years ago, my no holds-barred reaction was “yuck.” Suddenly, after nearly 4 years, I get it. Fleur de Narcisse smells of my childhood growing up next to a horse farm in Massachusetts. I smell hay, mulch, moss and wet, damp earth. There’s a sliver of leather in Fleur de Narcisse which makes me think of the horse saddles and the smell inside the barn. It is a similar experience yet no similarity in scent to CB I Hate Perfume Black March. Black March isn’t something I would ever wear, but it’s a fragrance so evocative of spring it nearly slaps you in the face with memories of being outside in the garden. Years ago when I first experienced L’Artisan Fleur de Narcisse I was expecting something, well, floral. I wanted to smell narcissus blooms. It doesn’t smell floral and certainly not of narcissus (daffodil) blooms so I felt cheated, tricked and hated the stuff. Now, many years later, I find myself in the desert desperately craving the smells of a damp east coast spring. I don’t know what possessed me but I sprayed on Fleur de Narcisse the other day. It was a revelation. In Fleur de Narcisse I smelled everything I have been missing. It almost brought tears to my eyes.

This post is as much about Fleur de Narcisse as it’s about nostalgia; about missing places you’ve lived and experiences you’ve had. Wherever you go in life you will always bring those people and places with you and sometimes memories float to the surface at odd moments. I’ve been wearing Fleur de Narcisse for several days now and loving every moment of it. Had you told me this would happen four years ago when I first smelled it and disliked it I would have never believed you. So maybe someday I will get Frederic Malle Une Fleur de Cassie, because I still don’t like that one, but after this experience with Fleur de Naricsse, I’m a believer in the never say never approach.
Posted by Abigail at 3/09/2011 07:33:00 PM

Oh...I may have to try this one - do they still make it? I don't recall seeing it at Barney's. Funny you mention Cassie. I recently snagged a sample of cassie - and I can't really smell anything...I'm scratching my head thinking, "what's this supposed to be?" Have you sniffed it - what are your thoughts?

Fleur de Narcisse was one of L'Artisan's super-special-deluxe (cough cough expensive) Harvest editions back in 2006. I think it's still available but maybe not because they only made something like 300-500 bottles total.

Cassie... ((sighs)) I try so hard to like Fleur de Cassie. It's FM and then it's Ropion and I adore Ropion but I just can't stand it, it makes my skin crawl. So many bloggers have listed it as one of the best fragrances of the past decade, so this is why I try to like it, but I just don't. To me it's smells blurry and fuzzy and nondescript musky/floral. It's just plain weird but not an edgy/fun weird - instead a hot mess sort of weird - like Ropion didn't know exactly what he was striving for. Of course I am in the minority on this one!

Two things here I am personally fond of and therefore am extra enjoying your pleasure with them:

1) Finding your way into a fragrance that was previously a "no," and
2) Fleur de Narcisse.

There is such a reward in that ahhhhh/a-ha! moment, isn't there? I'm a big believer in geography as another factor in how we...or at least I...receive scent, so I'm rather intrigued that you attribute your turnabout to your physical relocation.

As for Fleur de Narcisse itself, I didn't have to find a special path to it. Which is odd, in a way, because I first met it very early in my perfume curve, which would seem to suggest that I wouldn't "get" it, that it would be too difficult or weird or something like that. But no; it resonated immediately, and has ever since.

I was too embarassed to admit I got a bottle a few years back, even though it was an anniversary gift. But since then, folks are calmly plunking down for Malle, and Amouage, and even greater extravagances, and unless I'm mistaken, the economy actually got worse during the past 2-3 years, right? Anyway, yup, it's expensive. But it does take me there.

And I will cry when I run out.

I get the association with Black March. But I *do* wear Fleur de Narcisse. It actually warms up and blooms on my skin, slowly. You're right that it is not narcissus flower, per se; I think of it as narcissus in the same way orris root is iris. This one is so about the earth, and being a somewhat wet pile of hay in the sun...not just the hay smell, but the dirt, and the golden warmth, and the stuff that lives there that you can't see.

I like this one very much. I only have a decant, due to the expense of it. I like it because it is so singular..nothing smells like it. To me I do get daffodil...or rather the pollen-y smell when you smell daffodil at extreme close up. And all those other things. Hay. Spring. Also, it has an elegance..rather than just realism or power.
On the other theme, I associate places more with perfumes I wore there, rather than the scent of the place being echoed in a perfume. WOULD LOVE it if there were perfumes that could evoke places...but I haven't found them (yet).
cheryl

My mom recently bought me a body scrub scented with rosemary and creosote because I missed the way rain smells in the desert in the Southwest. So I totally understand the nostalgia for smells thing. (I also miss the smell of the old humidifier my mom would put in my room when I was sick. The ever so slightly chemical-y smell, the sound it made and the cool mist were instant comfort.)

Oh, my local shop had a bottle of this, I wonder if they still do. I love narcissus in other perfumes, and I like the idea of a wet spring perfume. Maybe I'll pop around and see if they still have it.

ScentScent,
I think this is the first time I've done a complete reversal on a perfume before. Normally if I dislike something, I really can't bear to give it a go another time. This was a serendipitous experience for me -- missing the scent of spring and then trying Fleur de Narcisse out of the blue -- and then having it be exactly what I was looking for...it was very nearly spooky.

I will absolutely cry when my Fleur de Naricisse is gone. But that is not stopping me from wearing it - I will not keep this hidden away like the good china - I want to smell this stuff every time I yearn for the scent of spring. :)

Fleur de Narcisse was an epiphany for me. As you said, normally the scent of a particular perfume reminds me of a place or time - NOT the other way around. I wonder if this will ever happen to me again? :)

So it sounds like you might be having the opposite experience -- you grew up in the southwest and now live in the northeast. Do you miss the smells of the desert? Do you have Diptyque L'eau Trois or Tom Ford Tuscan Leather or Sonoma Scent Studio Incense Pure? All of these smell exactly like my surroundings here in NM.

Abigail, I do miss those smells! Particularly the smell when it rained in El Paso, quite possibly the best smell on Earth. I think creosote contributes to that along with other desert plants like mesquite. It actually seemed strongest just before the rain, in my memory -- I suppose it was the approaching rain kicking up molecules, then once it hit where we were, they were drowned out.

I have a teensy sample of Incense Pure -- I am loving incense scents lately. A similar one is Wazamba. (Tauer Incense Rose is awesome too.) I haven't tried Diptyque L'eau Trois or Tom Ford Tuscan Leather -- I'll make a note to!

If/when I ever move out of the northeast, I know I'll miss the dramatic changing of the seasons. In the spring, when it starts to get light earlier and earlier in the morning, it really is unbelievably uplifting. After the horrors of the winter you're just crying with anticipation for the change.