Well Being: Barney's Route du The 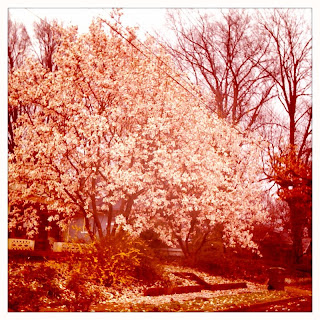 I was surprised to learn that this little gem has been around since 1986.  I discovered it back in 1995 or so and, I guess, thought that my awareness had ushered it into being.  It's bizarre to think the stuff was around when I was in high school, out making the rounds in the world.  What's most surprising to me is the fact that Calyx, which is much better known--and which I had heard of in high school--came out after Route du The, rather than before.  The two are so similar--and Calyx is so ubiquitous--that I always imagined Route du The was something of an imitation.

What they share is an impossible, neon idea of what it is to feel fresh and clean.  It isn't a soapy impression, exactly--a la White Linen, another study in Beatific Cleanliness--but a sense of being so well scrubbed, emotionally and physically, that the world can only touch you when, where, and how hard you'd like it to.  Both feel incredibly succulent, though Calyx is a little more openly fruity.  It should also be said that Calyx would never be mistaken for a tea scent.  Calyx is much more complicated than Route in general--and smells it--so I'm going to abandon the comparisons here, but those of you who love Calyx and haven't smelled Route du The should definitely consider seeking it out next time you're at Barney's, where Route is exclusively sold.

The notes listed for Route du The on the Barney's website are citrus, muguet, and amber.  I'm not sure it feels quite that simple, but it does feel uncomplicated and easygoing.  It does speak to me of "tea" (the name means "way of the tea") but not the way other tea fragrances which have been released in the last ten years or so do.  I do smell Lily of the valley but the scent doesn't feel incredibly floral to me or even much like a white floral.  I don't smell amber in any way shape or form, but I might be bringing to Route a more literal interpretation of what amber must smell like (certainly heavier and more resinous than this).  One of the things I love about Route is how long-lasting it is.  Fact is, I like many tea fragrances but find they just don't stick around much.  Tea time is brief.  Route lasts shockingly well for what it is, and citrus remains a part of the overall effect long into the dry down on me.  Overall I get a lemony muguet aroma which comes as close to all day sunshine as a fragrance gets.

It's very affordable.  Barney's sells it for 55 bucks, I believe.  At 100 ml, this is clearly a steal.  It's been raining here incessantly and still intermittently cold. But Spring is peaking around the edges of things, already, and Route du The has again been in heavy rotation at Casa Brian.
Posted by Brian at 3/05/2011 01:08:00 PM

If memory serves me correctly, Miriam Novalle, who ran the TSalon at Chelsea Market may have had something to do with the creation of this scent.

ooooh, really!? Thanks, Michelle. It's a favorite and I've always been curious.

First of all, thanks for the heads up.

Why haven't I seen this at Barney's??? I absolutely will be asking for it to try. That is a curious trio of notes indeed, and for that alone--even if erroneous--I'd be curious to try it. Based on your thought, though, my testing will not involve my "nostrils ready to clench and flee" posture, which they sometimes adopt when going in blind.

So you find Calyx and Route du The similar, eh? I'm sorta getting the idea, of clean and scrubbed, but to me Calyx will always be about a very bright fruity grapefruit top note evoked, while RdT never really registered. Then again, I remember Calyx being actually sprayed while RdT I know from those perennial rollerballs they make (do they still?)
I'd call the "amber" note an ambergris synth, really. Not the same thing, which explains why you don't find the resinous quality you have been searching for. Think slightly salty skin scent: rings any bells? (compare and contrast with drydown of Eau Ambree by Prada to see what I'm talking about)

To me RdT smells like how one's house and bedspreads would smell after a top to bottom ~thorough!!~ spring cleaning would. Not a bad thing and I would love to have a linen spray in that scent, to be honest.

Hi Perfumeshrine. I don't consider them similar really in any way but mood. I would never mistake Calyx and Route du The in a line-up. But something about their happy, upbeat intensity is closely related for me. I don't even see the amber synth, really. I would liken the synth you're talking about to, say, Balmain Ambre Gris, and I just don't get any of that, not even remotely, in Route. I've smelled a few lighter ambers, like Ambre Gris and the Prada, and this just smells very different to me. Anyhoo, I like it. Very much. I'm always surprised at the presence it has. It really isn't a skin scent for me because it's just too noticeable. For me, a skin scent is something I only smell when my nose is to my skin.

How weird is it that Tom at Perfume smelling Things and I reviewed this the same week? It's never written about. I just saw his review. We must have been on the same wavelength.

I need some of this. Kicking myself for not picking it up on my last trip Stateside. Love it. It is a squeaky clean breeze of a perfume. Like iced tea in a cold shower.