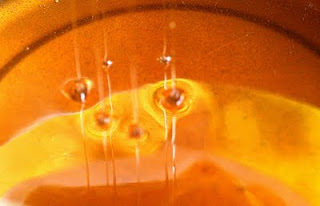 Is it just me, or does this Serge Lutens non-export smell foody?

I smell the myrrh in there, but it feels as if it's cushioned in some kind of vaguely fruity, slightly chocolatey something or other.  Maybe it's the honey.  Might be it's the almonds.  Could be the "spices" listed in the notes.  For me, La Myrrhe is a totally irreverent take on the idea of a myrrh fragrance, paying very little lip service to what I tend to think an incense fragrance is supposed to be.  If you were to describe it to me, I think I might dismiss it as something I couldn't possibly be interested in.  Fruity, foody, fuzzy - sweet and savory both: on paper, it sounds like you just had to be there.

But oh this thing is a wonder.  Silly me, I thought it came out fairly recently.  It seems so modern.  I was surprised to learn it was released over fifteen years ago, in 1995, long before I'd bought my first fragrance.  I often poke fun at Serge Lutens, not just because he's been around so long he can probably take it, but because, though the house is trying new things lately, its reputation seems to have calcified around a rather tried and true (make that trite, at times) template of stewed fruits, honey, and woods.  At times, the Lutens line up can strike one as a little like that lovely society lady who, finding the hair style that "works", proceeds to work it to death, twenty years on and counting.

La Myrrhe is nothing to laugh about.  It shows how ahead of their time so many of the Lutens fragrances have been - how simultaneously adventurous and serene.  Hard to snicker at a house which produced, in the course of several years, Myrrhe, Iris Silver Mist, and Bois de Violette.  All are masterpieces, I think, whether or not you find them wearable.  La Myrrhe is soft and mysterious but emphatic, too, almost rubbery - and thoroughly androgynous to me.  It's a linear scent.  All of its components seem to circle around in the air, working together to maintain the same dreamy fuzziness from start to finish.  Something about the fragrance reminds me of another fuzzy scent, Cinnabar, which, though different in every other respect, wraps you in a sort of blanket of scent.  Like Cinnabar, which is also strangely foody, La Myrrhe feels comforting.  It isn't austere, like Iris Silver Mist, but calming.

Instinct told me La Myrrhe might not be so widely loved, so I wasn't too surprised to see it has an average of three and a half lippies on makeupalley.  The first three reviews call it medicinal, bitter, and harsh.  I get neither bitter nor medicinal.  Harsh is hard for me to understand in something so abundantly soft.  One of the reviewers compares it to a dimestore perfume.  That might explain why I like it so much.  La Myrrhe's unusual combination of aldehydes and resins has a curious effect, and perhaps one reviewer summed it up best when saying, "much easier to enjoy than to analyze."  It lasts moderately well on me.
Posted by Brian at 6/09/2011 12:08:00 AM

Oh dear, lemming hard after this one. I haven't yet ventured into the storied land of Lutens but perhaps this one offers a good starting place for me. I've been very curious about Iris Silver Mist, too, I'm but wary of it. I am still hung up on wearable frags--ones I can actually wear out into my world, which unfortunately isn't populated with perfume hipsters. I keep a lookout for 'em, though! ;-)

Hey mad rambler! I'm all Yayyyyy you're back! :) Dunno if I'll give this scent a wander or not - my Lutens Faves Forever are MKK, Boxeuses, & Rose de nuit. How I tried tried to even 'like' Iris Silver Mist - by all rights, on paper, it should be a Love - but alas, I find it vile. How I've always loved the pure adventure of scent-questing ~ ever find that the hunt is as good as the gems? Thanks for another intruiging review, mister! Hope your day Smellz Well.

I tell you what-this is just the craziest perfume! I lved it from the first sample sniff and it's the only SL I have a back-up bottle of.

Your impressions were interesting to read, but I have never been able to describe what I'm smelling with this one. It makes a picture in my head of 2 lines. The bottom line is crisp and clear while the line above is foggy and fuzzy. What is up with that? None of my other perfumes do that-so weird!

Ah, my favourite Lutens. I might have been impressionable in my early perfumista days when I first smelled it, but the fact remains that nary a one perfume has since provoked a similarly intense reaction in me. Makes you wonder then why I don't have a bottle of the stuff.
Glad to know you too are a fan, B.

Oh and Brian, give Abigail some Shimmer-Trekkin vibes from Zanne! Saw on Posh she relocating and I hope it's all eazy-peazy-lemon-squeezy :) Tell her we Istia's love and miss her!

Brian, I agree with all you have said in your review of La Myrrhe; foody and spicy with hardly a thought of myrrh.

Does it remind you at all of Caron's Aimez Moi? I found a striking resemblance between the two.

I wonder if you'd like it, queen. I did from first sniff. It's weird but the things people find odd don't ever seem so odd to me, with the exception of a few like Secretions Magnifiques. I often wonder if I'm a little deluded and have no idea how bizarre they smell on me. It also seems though that my chemistry tames a lot of what seems most extreme, loud, or confrontational in theory.

Hi Zanne! Thanks for being patient and sticking around. Abigail and I are going through one of those phases where life takes over and the blog takes a bit of a back seat. But I always hate my time away, and find myself itching to get back. I know Abigail must be gong through a pretty hairy time. Moves are always so...fun--ain't they? I miss her like mad.

Cymbaline, that's probably why my review is all over the place! I kept thinking I'd waited enough time to write about La Myrrhe but as I wrote it I thought, this just isn't getting close to what this fragrance is for me. No words, I guess.

Dusan, I was startled when I smelled La Myrrhe and felt like I had a new barometer for the line. It definitely provides a useful context and comparison. And oh that bell jar.

Hi Josephine. You know, I remember reading a review on makeupalley or fragrantica that compared La Myrrhe to Aimez, and I meant to compare them, because I'd never thought of it before and it made me curious to see. I'll go do it now. What I remember of Aimez is a sort of doughy licorice violet thing, so in theory I would say no, they don't resemble each other to me, but you never know until you try them side by side. I'll report back...

Ah yes, the glory years of Serge Lutens! I have an old atomiser spray with remnants of La Myrrhe and still enjoy smelling it from time to time. It took me a while to really appreciate it but I wouldn't deem it as harsh either. If it wasn't so soft and fleeting on my skin, I'm sure I would have purchased a bell jar some time ago.