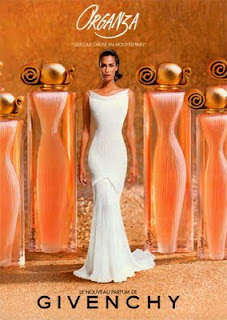 I keep thinking I must have written about Givenchy's Organza.  It's one of my favorites - even though, until recently, I didn't wear it all that much.  Weeks ago, a friend discovered a tiny bottle, probably 5 ml at most, in a flea market, and he wore it so much I was compelled to bring my bottle out of effective retirement.  Suddenly, I saw Organza in a different light, the way you do when you watch a favorite movie with someone who's never seen it before.  I appreciated it more, and saw some of its qualities more clearly.

I always liked Organza - creamy, rich, and long lasting, it's pretty hard not to like.  But when I bought a bottle a few years ago, it was only an ounce or so.  My friend loves Organza, along with Poison and Moschino de Moschino - and his signature, Chanel Egoiste - and it smells so fantastic on him (everything seems to) that I hated to see him dabbing rather than spraying, so I gave him my bottle, and I went looking for another one.

The bottle I gave him is older, and my bias against reformulations led me to assume it must be better than the current version.  I was surprised to learn that whatever they're currently stocking is just as good, if not a little better, than the original.  That's not the case with the fragrance's flanker, Organza Indecence, which is still nice these days but less in some indefinable way than it was.  Weirdly, Organza doesn't seem as robust now but projects with more presence and seems to last even longer than the old stuff, which is muskier but moves more quickly through its development, if something as linear as Organza can be said to develop.  The latest Organza envelops you in a mood, permeating your outlook all day.

Organza was created in 1996 by Sophie Labbe.  That surprised me too.  Labbe isn't one of my favorites. In fact, there isn't much of anything she's done that I would recommend.  The last thing she did that I smelled, Calvin Klein Beauty, was..what it was:  a clean, musky floral with all the presence of a raw peanut.  Nice enough for a Christmas gift - unlikely to offend anyone; it was a bit like giving your father a striped tie or a winter scarf (guilty, by the way), beige or camel colored, the kind of thing he wouldn't cry too much over if he left it behind after dinner at the restaurant.  He might not even run back for it.  Labbe's Parisienne, for YSL, left me kind of cranky.  Why mess with perfection?  Like Belle d'Opium, Parisienne seemed like some kind of vandalism: like Jean Luc Godard remaking Breathless as Porky's, although I suspect someone like Godard would have made the material a little more interesting, if not exactly re-inventing the wheel in the process.

The thing you notice most about Organza - which might just be a lie of the mind, an illusion created by the color of the "juice" and the name itself - is an odd impression of oranges, odd because there's nothing the least bit citrus about the fragrance.  The notes list orange blossom, but orange blossom doesn't smell like oranges, nor does Bergamot really, which is also listed.  The effect resembles Anne Pliska, another deceptive use of orange - though the two fragrances are otherwise pretty dissimilar.

That orangey impression never really wanes for me, though the floral heart makes itself known from the beginning and only deepens as the top notes recede.  Nothing really recedes, I guess, in Organza.  You just become aware of different things the longer you spend time in it.  The orange is abundantly creamy.  The florals - gardenia, honeysuckle, tuberose, ylang ylang, jasmine - are even creamier.  Organza is sweet - and gourmand - but doesn't feel sugared or foody.  It feels slightly old fashioned - perhaps because it's so rich and expansive - and big boned, like another creamy floral, 24 Faubourg (by Hermes), but the sweetened aspects make it feel distinctly contemporary at the same time.

Some of the sweetness - maybe a lot of it - can probably be pinned on the vanilla.  There's quite a lot of it in Organza, but, again, it's so perfectly balanced with the florals and a dash of nutmeg that it feels inseparable from them.  Smelling Organza, I would never think "floral", either, whereas with Faubourg you can't think anything else.  The base isn't really much of a base, as when Organza "dries down" it remains consistent with its initial impression.  The base is more like a coat the fragrance is wearing.  In addition to the vanilla, it includes amber, cedar, and sandalwood.  There's the faintest woodiness to Organza.  It's an amazing construction, this thing.  You regard it the way you do the sky, amazed at something so huge and wondrously constellated, its slow-moving clouds constantly shifting into the subtle shapes of only vaguely recognizable things.

I have way too many perfumes.  I make it a policy not to say just how many.  The point is I have no business getting anything larger than 50 ml.  Eventually, it will run me out of house and home.  Were I a more practical, sensible person, I would buy decants, or travel sprays.  Lately, though, I've been drunk on the way a big brick of a fragrance feels in the hand.  Case in point: those older, slender Chanel chunk bottles (what's dreamier than something called Cristalle in a container which strikes you as a fortress?)  I bought a bottle of Organza that is so enormous and formidable it feels like a staggeringly tall building on a busy street corner.  I can't help myself.  Nothing equals the feeling of a bottle like that, or matches so perfectly the scale a fantastic fragrance like Organza dictates on your fantasies.
Posted by Brian at 6/25/2011 12:26:00 PM

for some reason I think perfumes smell better coming out of their original bottles than out of a 1ml sample vial.

Never smelled Organza but-GULTY of being a bottle ho too babe.

Ah, when you seesmell Organza, you get what I get. I used to feel guilty that I liked it, and not just the "cool" Organza, the Indecent one.

I have a crazy funky bottle of each. The Indecent one came to me partial, priced per ml. The straight up Organza came to me priced to sell. I am glad to have each.

I made it a policy to stop saying how much perfume I had when I passed 10 bottles. Because I can still remember having none, and how decadent three felt. I never want to forget.

I did silly snort at the Cristalle Palace, btw.

Organza is one of my favorite winter sleep scents. The colder the night the better. It envelops you in warmth. And I never thought of it as foody-but-not; you're right, of course!

I bought a mini bottle, unsniffed, off ebay a couple of months ago, based on the notes. Sniffed desultorily once, but haven't put it on skin yet. Not sure why...

I loved everything about Organza from the day I saw it released - ads, its bottle, the color of the juice, the scent. Everything but how it smelled on my skin. I tried it many times. I even bought a mini bottle. And I could never wear it without feeling nauseous. I gave away my bottle but I still think it's a beautiful perfume.

Undina, it definitely has a strange relentlessness about it, for sure. The other day someone online asked what perfumes people love but can't wear. I've been trying to think of one since. I prefer some things over others and many aren't my cup of tea but I can't think of any I love that don't work for me. Unless we're talking about persistence.