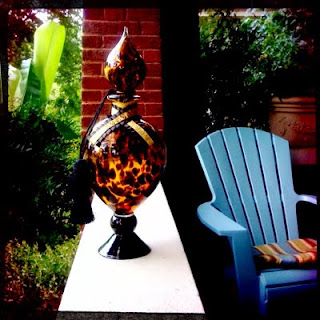 So I decorated this bottle for a film we're shooting this week involving the discovery of a long lost fragrance in a vintage clothing store.  The picture shows it with everything but the label, which I've yet to apply.  Someone of facebook suggested the name "Voodoo" for this fictitious fragrance.  After dressing up the factice, which is something like twenty inches tall, I started to think about what such a fragrance would smell like.

I like to think it was put out by a company called Parfums de Picolo.  Don't ask me why.  Picolo put out about five fragrances.  Voodoo was the standout, but it never really took off, and the company discontinued it after about three years.  An Italian company, Picolo eventually turned to soaps and other little novelty items.  Giovanni Finnochio, the founder, several years later, got into film production - cheapo Italian flicks that never made it over to the states.  Sophia Loren lookalikes.  Starring roles for late stage Gina Lollabrigida.  One of these films, roughly translated as "You Hurt Me Today, I Kill You Tomorrow", is now a collector's item, mainly for a scene involving Lollobrigida and a cat in an arguably non-consensual scenario.  After the film, Lollabrigida was said to be estranged from old friend and animal lover Brigitte Bardot, and blamed the entire incident on Finnochio, claiming a body double was used for her scenes without her knowledge.

Voodoo was one of only three fragrances created by perfumer Mario Pistina.  In the only existing interview with the man, he said that he wanted to construct the scent of sex, animals, public intoxication, children laughing, and cigarettes wafting over the top of a stucco wall at dusk.  He got the sex part right, at least.  And the animals.  Voodoo came in a beautiful leopard patterned glass bottle with gold and black trim and a black pedestal.  A smaller bottle, 1.7 ounces, was a bit less ornate.  At one time, a purse spray was made available, for those moments out in the world when the spell had worn off.  But the smell was strong and rarely wore off, and a dab appeared to last all day and into the night, at which point it took on subtle suggestions of the wearer's own body odors.

It wasn't as expensive as Joy by Jean Patou, nor anything by Guerlain, but was considered pricey nevertheless for the Italian housewives who were generally its targeted audience.  It sat nicely on the dresser or vanity, holding its own amongst better known fragrances and potions.  The rich formula contained patchouli, civet, amber, vanilla, peru balsam and vetiver in the base.  The floral heart consisted of ylang ylang, cinnamon, rose, jasmine, and carnation.  The top notes were peach,  bergamot, clove, and aldehydes.  Voodoo's closest kin would probably be Youth Dew and Tabu, though it was far more animalic than either of those.

The ad featured a woman's face with the shadow of what seemed to be a man's hand cast over her features.  The model's eyes were closed as if in a trance, suggesting some kind of languid ecstasy.  Behind her could be seen a leopard printed, somewhat transparent screen.  Through the screen, the vague impression of jungle foliage.
Posted by Brian at 6/23/2011 05:20:00 PM

Brian, I love the story! Maybe you should shoot it. I am always trolling the movie channels on Saturday morning for a film like this. :-) Love the factice too--it is beautiful.

Coty actually had a fragrance called Voodoo! The small sample I have is a little like TABU but with a cherry/almond note to it. Reminds me a little of some attars I've smelled. Very exotic! Didn't seem to stay on the market very long though. And you did a beautiful job on the bottle!!

What?! I can't find anything about it anywhere, Melissa! Where did you smell/find it? What was the bottle and packaging like?

wow, that's ..detailed. ;)
the notes sound a bit like a car crash (civet but no castoreum? ;) in a youth-dew-is-also-a-car-crash-but-works kinda way.

i think if you made youth dew more animalic it would explode from the sheer molecular weight of all of the stuff in it...

I would like to decree there be an art-opera (not soap opera) infused with perfume that has a large budget and Brian at the helm.

Say, an installment a month? Or maybe it's a movie cycle...

Sometimes I wish I never knew about the deleterious effects of UV rays upon perfume. I would love to feature a glorious bottle on my dresser top, one that *I actually use*--at least sometimes. It is such an iconic expression...and so contrary to other visual cues in my environment, like laundry piles, or hairballs, or sawdust, or *soil* (it's not dirt if it is from the garden, or robot parts, or whatever.

Brian here's a link to a review of VooDoo on The Vintage Perfume Vault and I think this is where I got my tiny sample. I'm always looking for more but no luck so far.