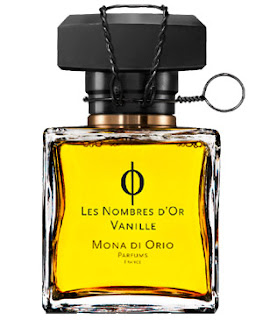 In November, I reviewed Cuir, a fragrance I continue to love but rarely wear.  Cuir was different in many ways than most of what I'd smelled by Mona Di Orio, which wasn't a bad thing.  It was simply stronger and a lot more linear, and it felt more operatic in its singleminded bullheadedness than anything else she'd done, including famously skanky Nuit Noire.  What you got at first was what you got at long last.  I admire Cuir and I think it smells fantastically assertive - it's bold in a way I appreciate - and maybe it's just the heat that's turned me away from it for the time being.  Like Norma Kamali's Incense it becomes something approaching a sci-fi creature in the humidity.  It has spinning teeth and goes into attack mode.  Still, I'm defensive about it, because it seems to be one of those fragrances that people who don't like what Di Orio does use as an illustration of her failures, and the perfume's so-called drawbacks always seem like bonus points to me.

I was doubtful when, during a recent visit to Luckyscent's Scent Bar, someone raved about Vanille and suggested I smell it, I guess because something in his voice and praise led me to feel that Vanille was going to be the "break out" fragrance for the line.  I assumed, in a knee jerk way, that this was meant to imply that everything before Vanille was a near or total miss, and I figured it must be pretty boring.  I smelled other things for a while before I finally brought myself to smell Vanille--including Di Orio's Tuberose and Vetyver, neither of which I particularly liked - but I was pleasantly shocked when I got around to the third of this most recent trio, part of the perfumer's L'Ombres D'Or series.  Vanille smells like a Mona Di Orio fragrance, and yet, like Cuir, it smells like something different - not just for her but in general.

I think probably my reluctance had a lot to do as well with vanilla's vogue.  I felt the same about iris and fig at one time, a kind of eye-rolling, enough already resistance.  Don't get me started on oud. But Vanille isn't the kind of vanilla I've smelled before.  The listed notes are petitgrain, clove, orange, rum, vetiver, sandalwood, guaiac wood, amber, tonka, and vanilla.  What you get from that is something unique among vanilla fragrances, something at once drier and more succulent, slightly boozy throughout, and spiced to perfection.  The tonka and guaiac, I think, give the fragrance something that feels like vintage Guerlinade, though the overall feel of Vanille is distinctly contemporary.  Vanille is a sexy fragrance.  It makes you want to touch yourself.  I can only assume it would make you want to touch other people, too, if they happened to have some on.  I'm going to guess this one will bring its wearer a lot of compliments, the kind people get closer to give.

A word of caution about words of caution:  Everything I've heard warns against spraying too much of Vanille at once.  It might just be my skin but Vanille is nowhere near as diffusive as Cuir, and to my nose, while not subtle, it's certainly no powerhouse.  Like Cuir, it stays fairly consistent throughout, but it's playing at a lower decibel.  Several people have advised against spraying it altogether, opting instead to dab.  I've yet to find any fragrance I'd rather dab than spray, for my own sake or anyone else's, and Vanille is hardly the place I'd start.  Wear it with abandon, I say.  It might just make you some bedfellows.  This is a beautiful fragrance, and another demonstration that Di Orio is infinitely more talented than her detractors would have you believe.
Posted by Brian at 7/22/2011 07:00:00 PM

I'm always surprised seeing people criticize Mona di Orio perfumes as I would love to own each and every one of them (the price tag is sort of stopping me in that endevour).
But the one I'd love having this instant is Vetyver. I am completely in love. :)

I agree with you here!!! I love this perfume, and I want to own it, but my reservation is that it seems to have little projection, and for the price, I want it to project a little, for many reasons, and I want it to have tenacity.

I did just try from the tiny sample, and of course that was a dab situation, so it may be in my future, but we shall see!!!

I really don't trust dab situations, so while the little vials I sometimes get are an early useful indication of whether I like a fragrance overall, the only real test for me is spraying, because projection and tenacity are pretty crucial for me too. I have pretty scent-hungry skin.

For Vanille especially I think you have to spray. I find it to have decent projection, and while the spice and stewed fruits quality does eventually wear off, the scent remains very nice for some time on me. I would say Vanille is far better than some of the other niche scents I've tested.

But that price is steep, so you should definitely try it out with larger volume.

It seems that I have scent eating skin as well!!!! What do you do to keep your scent on you longer? I seem to need the strongest formulations possible, but when it comes to some perfumes, (and I obviously have expensive taste), it can be pricey to douse myself, only for it to be consumed by my skin in a short amount of time.

I would still love to come over and smell sometime in the near future. Syncing up schedules will be the trick :)