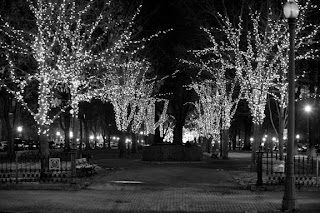 Can you believe Angel is almost 20 years old?  Thierry Mugler’s Angel launched in 1992 and is far and away the most groundbreaking fragrance of the past two decades.

The first time I smelled Angel was December, 1997.  I was Christmas shopping at Macy’s in the downtown crossing section of Boston.  Angel will always smell like Christmas to me.  I have never been able to sniff it objectively, my first impression of Angel being tightly interwoven with the sights, sounds and smells of Christmas.  I was so struck by Angel on this day in the winter of 1997 that I remember what I was wearing.  I recall the heft of my chocolate brown suede coat and the over-the-knee dark brown boots I had just bought myself.  I was really into brown in the late 90’s.  I remember carrying several shopping bags which were cutting into my fingers and struggling a bit with my coat tossed over an arm as it was now too warm to wear it inside the store.   As I walked through Macy’s I was accosted by one of those enthusiastic sales associates with what seemed at the time like a machine gun of Angel at her side.  It was unusual for me to allow myself to be sprayed, but this time I did. Tis the season I suppose.  I let the sales associate give me a spritz and then kept walking.

A few minutes passed before I sniffed the wrist where Angel had been sprayed.  I stopped in my tracks.  I was dumbstruck.  Angel was unique, unlike anything I had smelled before.  Somehow I had managed to be completely unaware of Angel from 1992 until my first encounter in 1997.  I smelled it on myself for the first time without any association of others wearing it around me.  Within five minutes I knew I must have this perfume.  I knew I would buy a bottle on my way out.
As I walked around Macy’s that day the entire city was dressed for Christmas.  Boston was strung with lights and there were Christmas trees and decorations aplenty.  These Christmas images melded with my first impression of Angel and I will forever associate the fragrance with festivity, joy, pine trees, candles and sparkling lights.  I’ve never been able to smell Angel the way others do; I have never smelled the super-sweet candy accord others seem to despise.  If I really think about it, if I dissect Angel, what I smells starts with a shrieky citrus blast which then mellows ever so slightly into a highly aldehydic, metallic, mentholated, sweet earthy patchouli.  This is technically what I smell.  But what I actually smelled that first time back in 1997 and still smell to this day are sparkling lights, candles, pine trees, cold air, damp snow, ice and a house warmly decorated for the holidays with a blazing fireplace and baked goods.  I smell promise and happiness.

Angel isn’t smooth, it is rough, a little pitchy and full of character. Her personality is like that overly dramatic friend, who embarrasses you slightly but has a heart of gold and is perpetually fun to be around.  I absolutely adore Angel.  It was love at first sniff.  Happy 20th birthday, Angel. 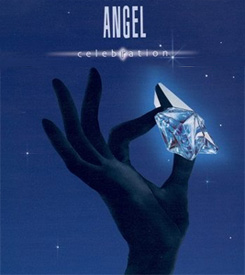 What a fantastic memory. It's hard to believe Angel is that old; it doesn't feel dated a bit to me. (Hopefully that doesn't mean I'm stuck in the 90s).

I actually don't have a good memory (at all). But I vividly remember my first encounter with Angel. Must be that olfactory sense working overtime.

I don't think Angel smells dated or 90s but I'm surprised how many think so. I would guess those who find it dated must have been born in the late 80s/early 90s with their mother's having worn it when they were kids. That's my only explanation!

Lovely writing, Abigail, and lovely images of Christmas in Boston. Somehow I completely missed Angel and have never even tried it--I will have to correct that.

20 years???? Yikes! :-) I love Angel. Brought a sample spray of it with me on a trip to Paris when it first came out in the early 90's, and have worn it since. What can I say, it reminds me of Paris. And who knew that it would become such a bit hit over there, too? Just purchased a bottle of the Le Gout du Parfum, which is marvelous as well. Angel, we love you!

I love people who love Angel.

Queen,
Absolutely correct that! Who knows if you'll like it...it's a ferocious yet lovely beast...but no matter what it's an experience.

Karin,
I think it's cool that Paris took to Angel so massively. The last time I was in Paris (2006) the whole city smelled of it.

Elisa,
Me too :)
Sniffing Angel even on a complete stranger tells me there's something about her I would like

Oh YES, YAYYyyy, I *Salute* your Gorgeous SALUTE to Angel - my Love, my Precious, my 4-ever-help-me-it's-Too-Good scent!! :)

I'm wearing her right now and my mind is on Fire - as always. *Magic* A sensual Delirium ~~ Yeah, I'm with Elisa - Love people who love Angel!

Abigail, you So Rock for these proper props! :)

Crazy! I smelled and bought it in the very Macy's you describe at christmas time too! Except it was 2001, a little behind the times I guess but better late then never right! I associate it with that time of year, specifically with snow. It has multiple personalities to me sometimes it's warm and inviting and other time's it can be an icy bitch! Since then I've moved to Florida and I just can't stomach it here, it's just wrong in this weather. And I wish women who lived here knew that, I smell it everywhere! But if I ever move back to the northeast I will have to buy a bottle, it really is a gem!!

Such a wonderful smell and perfume memory :)

Having read your wonderful article, may I respectfully remind that Angel was not entirely that groundbreaking. Nirmala by Molinard and Animale Animale for men by Animale spring to mind immediately. All the best.

You're right, Angel seems to have copied Nirmala. I've never smelled Animale. But Nirmala is so obscure that I don't think many have ever sniffed it or heard of it. So Angel gets the groundbreaking label because it's mainstream...precisely because it became mainstream...a scent as unusual as Angel didn't necessarily seem poised to become such an enormous hit. But it did, against all odds.