I Wore This: Amouage Interlude Man 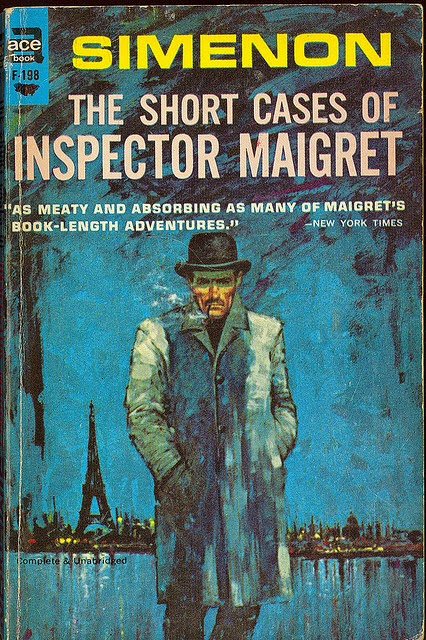 I was wearing this last night while reading another Inspector Maigret novel by Georges Simenon.

I'm wearing it again today, doing a side by side comparison to Chantecaille's Kalimantan. Both were done by Pierre Negrin, and they're very much alike, I realized: I don't remember how. People just love Kalimantan but I've never warmed to it - not as passionately as others seem to; whereas, I knew the moment I sprayed Interlude Man that I'd be walking away with it.

In the mystery novels of Simenon (Penguin is re-releasing all of them, or so they say, one a month, to the bitter end - something like 50, all told) Maigret is always smelling the perfume people usher in or leave in their wakes. Just last night he smelled it on a middle class French woman whose husband had been murdered. Several days ago, in another one of these books, a Danish woman locked in her room by her one-eyed brother was constantly broadcasting her scent throughout the house, smelled and remarked upon by the Inspector, each time he entered the front door. Today, the mother of a criminal, herself no Polly Pure, sobbed dramatically into her perfumed hankie.

Did Simenon enjoy perfume? I've searched out biographical information on him but compared to his novels the story of his life... Well, no one is stabbed. He seems to have enjoyed perfume, because it makes an appearance in nearly ever Maigret mystery, employed like facial features and dress to convey character and background. Many a mystery novel excludes the mention of perfume altogether. I picture Simenon in a cafe, reading about a burglary in the paper, grafting its specifics onto a story he remembers about a brother and sister who are actually man and wife disguised as siblings, when an overstuffed woman walks in, radiating tuberose and carnation. All seem essential components of the mood.

I do love Maigret but I don't really get Kalimantan - yet it's similar to Interlude in many ways. They have the same basic structure, maybe. I guess other detective novels are similar to Maigret. Criminals, or their authors, can only come up with just so many plot lines; just so many ways to kill a widow in a darkened alleyway. A limited number of methods and settings for strangulation.

One little ineffable something or other makes the difference. Interlude has the woody amber foundation of Kalimantan, for instance, but substitutes juniper and incense for cinnamon, making all the difference in the world to me. Same writer, different stories. There's also the complexity of translation. The other night I realized I'd purchased two Maigret novels which are actually one and the same: the book was published under two different titles. I can get rid of one, I thought. Then I checked the first pages against each other and realized that two different translators had made the book two different reads probably. Would I like one just a little and love the other, like Negrin's two stories?

Later: The following night I wore Interlude to a party. It's been a little less humid, and I kept smelling it on myself. Is this too much or just enough, I wondered at one point. Outside on the patio a woman I was talking to asked me suddenly what was I wearing. I'm so unused to people commenting on my perfume that I immediately assumed she meant my clothes, though she could see them as well as I could and they were probably largely self-explanatory. Shirt, jeans, shoes, under-stuff. I almost started describing my attire. Then realized she must mean the Interlude. This was the first comment, let alone favorable one, I've received on a fragrance in longer than I can recall.