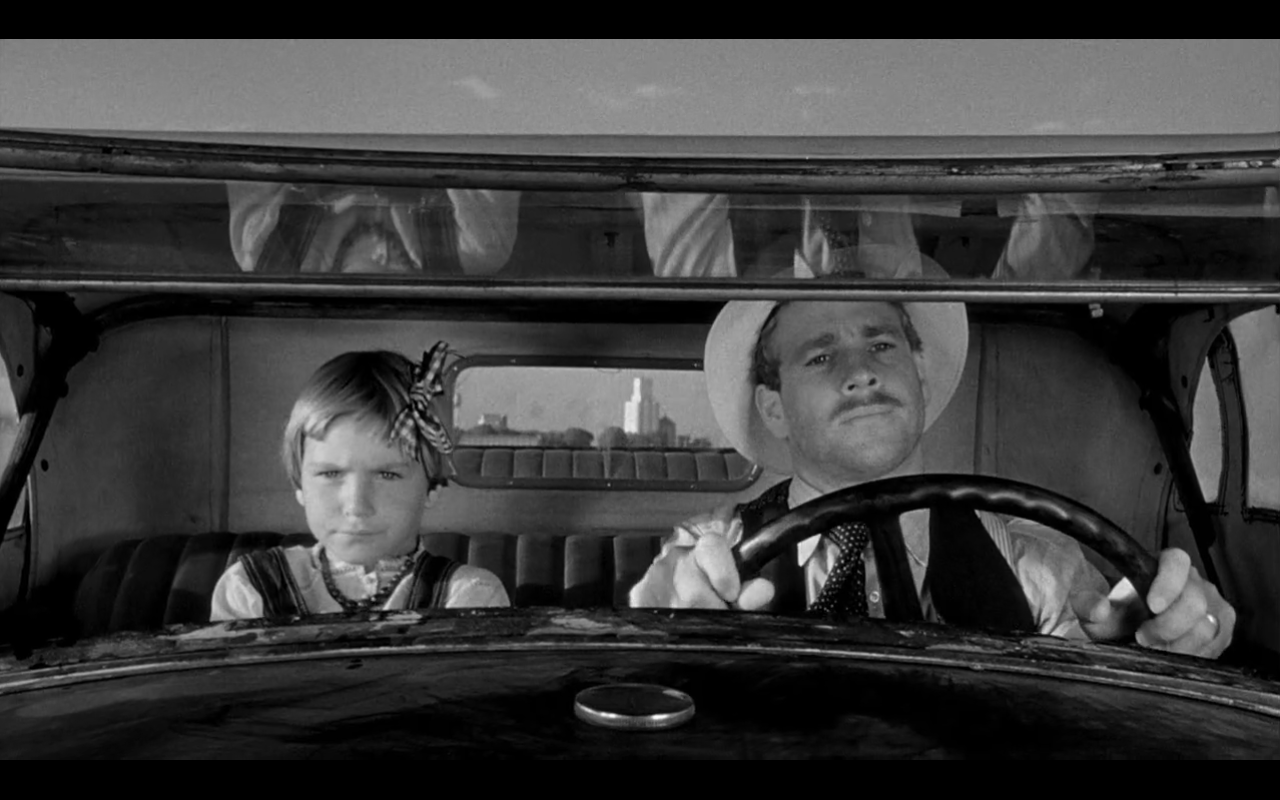 When Addie's mother dies, Moses Pray, a former suitor slash john shows up at the funeral. The funeral is decidedly middle of nowhere, prairie in all directions, and other than Pray, and discounting the droning preacher, only maybe two people have attended: two elderly women who've made Addie their charge. Moses happens to be passing through and stops to pay his respects ("I know your backside is still warm," he whispers to the coffin), but the women seize his resemblance to Addie (same jawline) and while they can't talk him into parenting the nine year old they manage to con him into driving her to her aunt's house a few states away.

So the movie is playing on the whole It Happened One Night schema of opposites stuck in a small situation together, rubbing each other the wrong way; referencing dust bowl iconography (the photographs of Dorothea Lange, among other things), The grumpy adult child faces and curve ball verbal outlandishness of The Little Rascals, the history of road to nowhere movies, gangster films.

Moses cheats widows out of their deceased husbands' money, selling them never-ordered Bibles he's embossed their names on, after tracking their misfortunes in the obituaries. Your husband ordered this for you but I can see you're in a bad place so I'll just give you a refund, unless you want something to hold onto that memorializes him in death by contradicting the thoughtlessness that characterized him in life, etc. Addie turns out to be an even better con than Moses, jacking one sale up from his modest 7 bucks to 24 - so he delays the aunt situation indefinitely, and the two stay in various flops that dot the map between their bereavement destinations.

At one point, overnight in one of these motel rooms, after Moses has gone to bed, Addie gets up and quietly locks herself in the bathroom with a cigar box full of mementos from her mother. In the box are pearls, postcards, and what looks to me like a half ounce bottle of Evening in Paris, with its classic hourglass meets urn silhouette. The very best thing about this scene - aside from the idea of such a tomboy taking an interest in such a feminine perfume, aside from all the standard implications of a scent reviving memory, conjuring the dead - is the fact that Addie, posing in front of the mirror as her mom, douses herself in the stuff the way a man would the cheapest splash cologne, slapping it on her neck, her cheeks, and finally, for good measure, wielding the bottle like a salt shaker on either side of her face.

From this the movie cuts to the next morning, a tight shot of the front seat of the car Addie and Moses spend most of their time in. Moses keeps sniffing the air, wrinkling his nose like they've passed an animal carcass on the side of the road. He finally figures out it's Addie, who seems pleased to be noticed, like her mother was, for her perfume, to have magnetized attention this way, but she can't command it for long: Moses opens the window over the dash, airing out the cab, and Addie's face flatlines back into its frustrated childishness.
Posted by Brian at 9/11/2014 10:16:00 AM