Burlesque Without the Kicks: Moulin Rouge 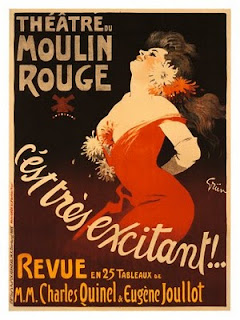 I didn't know what to expect from Moulin Rouge, as I'd heard contradictory reports, none of which seemed very promising, given my expectations. Histoires de Parfums is one of those lines you wouldn't expect to be the underdog it is. The quality is good, the presentation is first class, and the price point, though on the high side, suggests a sense of exclusivity the fragrances tend to justify. And yet for a new release, Moulin Rouge has received relatively little comment; nor did the recent Tubereuse trio, all of which I love (though there is a very good piece on them over at Grain de Musc). The line itself is available in only a few places, neither of which is Luckyscent or Aedes de Venustas. All of the fragrances were reviewed better than favorably in Perfume: The Guide, so maybe backlash is part of the problem. I was shocked to see the line dismissed en masse on one of my favorite blogs recently; and even more shocked that some of the fragrances were regarded with the kind of disdain usually reserved for celebrity scents du jour.

I'll start by saying that, as a whole, Moulin Rouge isn't my thing. I think it's lovely, if not lush or plump enough to qualify as gorgeous. I wouldn't say it's delicate; nor is it effervescent. But it's a skin scent by my definition of the term. It doesn't project much, if at all. I mention these things right up front to make it clear that the deck is stacked against such a fragrance for this reviewer, and in fact when, before receiving it, I read a review which characterized Moulin Rouge as sheer, an alarm went off in my head. However, if I were presented with three other popular skin scents and Moulin Rouge, chances are I would choose the latter.

Often with Histoires, I don't really see much of a connection between the stated inspiration and the resulting perfume. 1740 is one of my all time favorite fragrances. It speaks to me like a hypnotist. Other than the sadistic power it holds over me, I'm not sure I'd call it an apt tribute to de Sade. Colette seems even more of a stretch. Mata Hari comes a little closer. Moulin Rouge is a near perfect evocation of its namesake in ways both literal and associative. Its real failure for me is that it paints what should be a colorful portrait in watercolors rather than oil.

You get a rush of that wonderful cosmetic smell up front and for the first ten minutes or so; a smell not so far removed from Lipstick Rose. Unlike Lipstick Rose, this quality in Moulin Rouge resonates more three dimensionally, creating a deeper, more detailed drama in the mind. The fragrance requires a degree of transparency to achieve this, so that you might see through it, though in the bargain it sacrifices the vivacity and even good natured garishness you'd expect from something inspired by one of the world's most infamous burlesque venues. In Moulin Rouge, the cosmetics mingle with the cool, medicinal tones of iris. Somehow, iris is made to perform a sleight of hand I've never known it to execute. Before I read "feathers" in the company's PR description, I pictured them, sensing that weird smell ostrich feathers can have, half animal, half glamor. The iris also adds just enough powder to evoke blush and eye shadow stirring in the air.

There's the slightest touch of vanilla. And the cosmetics wear down to reveal a barely perceptible fruit medley I've gotten from other Histoires scents. I appreciate the artistry and the subtlety behind Moulin Rouge. What I miss is a sense of the raucous activity and even some of the sweat and cigar smoke which would inevitably have been a big part of the place's experience. I wanted something more voluptuous and unpredictable. What I got suggests a picture postcard for tourists. Unfortunately, it's the kind you'd bring back to your mother.
Posted by Brian at 4/27/2010 01:45:00 PM

What a lovely review! I haven't tried anything from Histoires but I would love to try the ones mentioned here. Escpecially Moulin Rouge and all the tubereuses.

{pauses}
Well, I have to say, I'm one of those who doesn't quite get why the HdP line justifies its cost. But I'm still learning.

And we clearly agree on the "what up with that?" aspect of the naming/dating range. While I am more than willing to accept that one person's concept of a scent appropriate for, say, George Sand could vary significantly from another's idea of the same, I don't see the connection in the assignations. There's been yammer to this effect in the comments on other blogs, too...I know, because I yammered along with. ;)

In HdP defense, however, my exposure to the line has been largely through the *former* formulations of so many of the historicals, and I have not smelled the new tuberose trio. So perhaps I need to stifle? A little bit??

I *do* appreciate your thoughts on all of this, because you do such a good job of expressing why certain scents should not be ignored. Without putting any bunnies in the pot, as it were. (Hey, what's a Wednesday morning without a film reference?)

Hey Em,great to hear from you. I'm much more into the Tubereuse trio, especially #3, but you have to like immortelle and off beat perfumes, maybe even Angel strength style juxtapositions. The first two I've tried recently and plan to review. They're very nice, and they relate to #3 in unusual ways. Moulin Rouge is lovely but whispers.

Scent Self, I own three bottles of the older Histoires formulas, and I can tell you they are miles apart. There's really no comparison. I'm really curious why they were changed so dramatically. I happen to like those older versions more than most things on the mall shelf, but you're right, and I never thought about it (because I got them dirt cheap), they're not worth that price tag.

I appreciate all the new versions. It always comes down to projection and persistence to me, and the Histoires I'm not crazy about lack in those departments. 1969 is fantastic--for about an hour. Blanc Violette is a milky, nutty violet. End of story. Vert Pivoine is your garden variety peony. And so on.

But there are some in that line that I think are well worth the money. Patchouli Noir is a mellow but persistent woody rose along the lines of Aromatics Elixir. It's very elegant. That formula has not changed, I was told, and I would say it is the rare older version which IS worth that money. Among the many patchouli fragrances I have, it stands out.

Top of the list is 1740. Any line that produces that is worth my attention for quite some time. It's one of my top ten. 1740 lasts a good day on me, and is one of the best uses of immortelle I've come across: far better than Sables, which I also love. Tubereuse 3 is amazing. Mata Hari--not quite amazing--is very very good. I would call it a powdered spicy-orange rose carnation thingy. I have both versions of Mata Hari. The old version is perfectly lovely. The new one blows it out of the water.

So they name them after dates and historical personalities. Okay. I mean, I don't know, is that any worse than Britney Spears charging anything at all for something called midnight fantasy which smells of blueberry syrup and cake?

I admire that they have a creative mission. I appreciate that some kind of inspiration and imagination is going on there. I respect the consistency of their vision and the care they put into the experience of their perfumes. The old bottles were ridiculous annoyances. The new bottles learned from that mistake and are wonderful.

Unfortunately, I think they might have done themselves a disservice by creating this confusion, however noble the intentions, however good the results. At a time when you never really know what version of a perfume you're reading about online (pre oakmoss? post? hatchet job? no?) it's a big gamble to change your fragrances altogether, top to bottom, especially without publicly making the distinctions clear. If someone dismisses the older versions, without realizing they've changed, and how, you're screwed. Combine this with Turin's sky high praise and you're screwed on the other end as well, because everyone flocks to those old bottles and compared to that praise they seem like...a trick?

Hi Brian! Coincidence! I wore Moulin Rouge yesterday (and even posted a short review on MUA). Have a decant of it, purchased unsniffed cause I love everything to do with that time period - love Paris, love Toulouse-Lautrec's paintings, love the Baz Luhrmann movie. I like the fragrance, though don't know how much the association with the time period influences my appreciation!

I had the same confusion when after having samples of the "new" versions of the history series, I received samples from the "old" series from Katie at miomia when she was discounting and clearing out old stock. Some were SO different, as you mention. Then I'd see posts on various boards about various scents in the series, and would set people straight about it cause everyone seemed confused.

As to the price of the bottles, yeah, I agree they're high. They don't mention how many of the ingredients are "natural" as opposed to synthetic. Perhaps that accounts for it? I really like that they're offering those travels sprays, and have considered purchasing. I'm with you on Noir Patchouli and 1969. 1740 is incredible, but not for me. The others were kind of meh, and even at discount, I didn't want to purchase the old ones...

My fist time posting here.
Now, that Takashimaya is closing its doors in June (July?) does anybody know what is going to happen to HdP?

Ah, well that does paint a fuller picture. And yes, it's quite a large canvas to consider...the iterations, the marketing, the which one does who like, blah blah blah.

You're right; the naming thing could simply be viewed as a gimmick no worse than being "Curious" or "Fantasy" or whatever. Maybe I'm feeling a bit more agitated by it because I *like* the concept. I mean the gimmick. I mean the sorting strategy.

Of course, the end result is...I want to smell that. And that. And that. I certainly would be more than happy to be pleased. And to reward a perfume company putting effort into improvement. Hey, Jules Verne sounds -- BLAST! sticking with what you've smelled and discussed. (mmmrpph rrmp naming style...)

Thanks! Will chek it out.