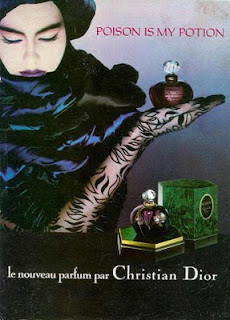 Like Luca Turin, I would give the latest formula of Poison five stars, but I wouldn't put it in my top five fragrances of all time. I'm not sure I would put it in the top twenty.

I knew they'd done something to it. What I remember isn't what I got when I bought a bottle over the course of the last few years. It is and it isn't. It smells great but none of the expected memories were triggered, and I was fooled into thinking it mustn't be as good as I thought it was. When I used my bottle for a film recently (which is to say I broke my bottle for a scene which required it), I didn't replace it. I decanted the perfume into a few old stoppered bottles, and even when one leaked I let it go. I've seen many bottles of Poison in the stores and have read each of their boxes to judge their ages. Poison is still popular enough that, unless you're willing to dedicate yourself to the risks of an online search, coming across an older version is pretty unlikely.

What I remember is being totally floored by Poison. It wasn't simply a perfume but a frame of mind, like desire and ecstasy are frames of mind. There are only a small handful of fragrances I ever sought out at the women's fragrance counter back then (they are: Angel, Poison, and Fendi). I didn't want to draw the wrong kind of attention to myself, or waste a lot of time with subterfuge involving an impression I might be buying for an imaginary girlfriend. No guy buying perfume for his girlfriend spends more time smelling it than she would, and I couldn't be sure I wouldn't. I had to love a perfume beyond reason to make such a spectacle of myself, and I loved Poison that much, but when I smell it now I wonder why.

I stopped wondering today, when I ran across an older bottle, finally, at a local drugstore. I thought I was seeing things when I spotted the packaging, an upright, rectangular box, as opposed to the now very familiar short square cube. When I got it in my grubby little hands I saw that the ingredients listed only alcohol, parfum, and D&C Violet No.2. If you've looked at the latest list of ingredients you know it reads longer than the Smith pages in the phone book. The Dior decal had come loose and the box had a slight film of dust over it. While the clerk was turned the other way, I removed the bottle (taller and narrow, rather than the "apple" shape everyone thinks of now) and sprayed some on my hand, totally unprepared for the rocket trip down memory lane.

I would easily classify the old Poison as one of my all time top five favorites. And it's easy to see how this stuff divided people so violently back in the day. It goes beyond robust. It surpasses intense. But the newer stuff isn't for sissies either. So what's the difference, exactly? Musks, primarily, it seems to me. And what a difference they made. The newer Poison is just as spicy, but it ultimately feels more floral, more feminine to me. It also sticks to the surface, if that makes any sense. It doesn't have the depth of the older formula, which feels like a very plush velvet pillow you might fall into and never hit bottom. A very dark velvet, smoky purple, like the bottle. The animal density of the original has a unique psychological effect, and a stealth. It takes over your senses but at a very low register, a baritone really, at a frequency only asubwoofer would recognize. Consider those musks a subwoofer. Lacking them, the latest version is all treble.

I've been so happy all day, smelling this stuff on my very own arm. Problem is, now that I know how truly good this stuff was, I'm left with only 50 ml, and am scared to use it up and wait for the appearance of another old bottle in some unknown drugstore.
Posted by Brian at 4/07/2010 07:34:00 PM

Very, very good analogy Brian! No subwoofer. Many of the reformulated perfumes I've tried have no subwoofer, they're all treble, like a Japanese transistor radio from the Fifties.

I wore Poison in the 80's and absolutely loved it. That purple bottle! That WOW factor that I'm sure turned many people off around me. I haven't dared to try the latest formulation, fearing major disappointment; but how I would love to find a dusty package in the back of an obscure shop!!! You must be elated, Brian!!! I totally get it. I would be the same.

Speaking as someone who *despised* Poison back in the day, and who bravely retried it recently - even I can tell they have Messed With It. It still terrified my family ("Mom, go in the other room, I can smell you from all the way over here!"), and I'd only put on one drop from a dabber vial. But you're right, it's lost whatever it was that made it smell truly dangerous. Now it's just tuberose-berry-sweetness, as opposed to the tuberose-berry-cough syrup of death it used to be.

In principle, I'm sorry about it. Though I'd probably be quite happy to never smell Poison in any iteration myself, it's a sad truth that all the guts have been ripped out of the scents that used to have them.

A musk subwoofer! I love that.

I remember asking for and getting Poison for Xmas back in the late 80's. I put it on and away we went with the inlaws in their car, to dinner. After a few minutes they all opened the car windows. The stuff was strong, even with a light hand.That's my memory of it.

I adore the old formulation of Poison as well! How lucky that you found it in a drugstore. I think the dark smoky velvet analogy is perfect. Peace, La Bonne Vivante http://cadadiaamor.blogspot.com/