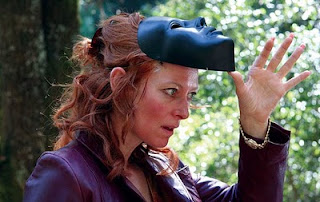 The best moments of Like This happen right up front, for about the first ten minutes. That isn't to say the base is without merit. The Etat line has some sort of trademark dry down. I recognize it here, but don't ask me to describe it. I can't. It leads me to believe I'd know one of their fragrances at twenty paces, and right away, Like This registered like the return of a nostalgic scent. I like that base, whatever it is, but by the time Like This hits its stride I've lost interest in it. By dry down, I've moved on altogether.

It pains me to say this, because there aren't many Etat Libre D'Orange fragrances I don't care for. I love the line. I defend its sensibility against detractors who find it tasteless or tedious. I wish half the people making perfume had Etat's visionary sense of humor. I would sweep the floors of their workspace just to be around that kind of energy and intelligence. But Etat has its mis-steps for me; namely, Don't Get Me Wrong Baby, I Don't Swallow, and Fat Electrician. The fact that Like This comes fast on he footsteps of Electrician really means nothing to me. I guess I could see doom in the lack of thrill I find in these. I could read it as a trend. But I feel pretty confident in a line which has given me so much pleasure: Charogne, Rien, Jasmine and Cigarettes, et al. And I respect the misses of a creative process as much as I adore the hits.

I think I would feel the way I do about Like This whether it had been curated by Tilda Swinton or not, yet I have to acknowledge that it feels like a rather odd match. Maybe I'll come around. I'm always changing my mind about things. My hopes were high. What could be better than Tilda and Etat putting their heads together? I won't answer that question, because I could spend a lot of time going down the list. I've read that Tilda approached Etat, having smelled the line's Rossy de Palma and Tom of Finland fragrances. The story goes that Tilda helped develop Like This. I have no idea anymore how involved people become in their fragrances. I guess it must vary. Some phone it in; others shake the beaker. I have a hard time picturing an actress, socialite, or musician designing clothes. While they can draft up something clever in the best case scenario, what can they ultimately know about drape and seam?

Like This is alleged to have Pumpkin. I don't smell it. I do smell the ginger. I can't tell you how excited I was to hear that immortelle would be in the fragrance. And yet I'm hard pressed to identify it. The fragrance bears an uncanny resemblance to Tibetan Mountain Temple by Pacifica. Tibetan Mountain Temple is about the same size, and cheaper. I prefer it. The irony is that it also happens to smell more like something I would associate with Tilda Swinton. Regardless, I look forward to the company's next release.
Posted by Brian at 4/13/2010 09:26:00 PM

Funny; ginger/autumnal fragrance for a ginger/autumnal beauty...makes sense in a way.I like tibetan mountain temple a lot, so I must give this a try. Thanks so much for the post. I too like etat libre d'orange's sense of humor.
Peace, la bonne vivant

It's funny how some ranges just really speak to you and some don't. I love most of Bond No. 9 and CB I Hate Perfume even though there are fragrances in those ranges that I'm not keen on. On the other hand there are other brands that I run a mile from - Estee Lauder and Jo Malone fit into that category for me. I haven't tried enough of ELD'O, but can see what appeals about the range as a whole.

Abigail - are you saying that you prefer Tibetan Mountain Temple, or Like This?

(I really liked Tibetan Mountain Temple when I sniffed it. It seems like a Arrgh!-I-had-a-bad-day-and-need-to-relax-and-here-in=this-bottle-is-my-zen frag. Why haven't I bought it??)

I'm disappointed to hear this isn't an immortelle scent after all. I had been looking forward to trying it because of that.

This makes me so sad. I love SWINTON, and I was definitely looking forward to this release. I was expecting it to be something very odd that somehow works, you know? Like Tilda.