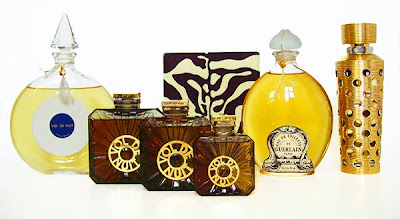 American Idol: why is it that everyone (well, almost everyone) is so good this year except they aren’t blowing me away? I’m still peeved that I lost my favorite boy so early on: Alex Lambert (no, not last year’s Adam Lambert, but this year’s shy little Alex Lambert who was genius). At this point I’m liking Siobhan, Bowersox and Lee.

I’m refraining from posting a review of the “anti-perfume.” One of my favorite bloggers, Nathan B, wrote a nice piece about it, with perfect pics (L’eau striking a pose next to bars of soap, L’eau flirting with the whitest of towels) but I cannot get past the marketing.

I’m sad Takashimaya in NYC is closing. I only went to the shop once but it was a beautiful boutique (for the Asian obsessed such as me) and they carried several perfume lines that aren’t available anywhere else in the U.S. If anyone hears that they are having big discounts in the final weeks before they shut their doors please let me know. I have my eye on Takashimayo “T” fragrance and Mona di Orio Jabu.

Brian gifted me (among other things) a bottle of Agent Provocateur Strip. This stuff is fantastic. It’s a warm cinnamon-y amber (and I get patchouli but no one else does) that is so numilicious (nummy, derivative of yummy, with -licious). It reminds me of a mix of Coromandel, Rousse, and Prada original. I received it just over a week ago and I’m not kidding when I tell you I’ve used at least 1/3 of the bottle.

I tried the new Chanel lipsticks and they aren’t all that. Rather thin and dry off quickly. I was sucked in because Chanel named a few after their fragrances.

Ok, so I mentioned this gaggity stuff I’m putting on my face a few weeks back – emu oil. Well, it is actually working. I have smoother more even toned skin and it’s fantastic around my eyes, less fine lines. Of course you only use this stuff at night before bed because it’s an oil but I think it might be the 8th wonder of the world.

Is Amy Poehler pregnant again? She’s doing that weird thing on Parks & Rec where she always has a bag or object in front of her stomach.

Beverage of the week: water

If you use Facebook you should be aware of this

There might be something wrong with me, because I found Jennifer Hudson’s former size/figure refreshing. Assuming she was perfectly healthy at her previous weight, I thought it was nice to have a little representation above a size 10. But now she’s the new face of Weight Watchers and thin. How dreary.

So how long do I have to wait for the new L’Artisan Nuit de Tubereuse? Because I’m antsy.

Sandwich of the week: BLT on the freshest whole wheat bread (sans crusts) with Boston Lettuce and vine ripened tomatoes (sliced razor thin). And, unfortunately, a good BLT doesn’t taste right if you use fat-free mayo, you need to use the real deal (just use sparingly of course).

Dinner of the week: Korean JabChai. Clear glass noodles (made from rice, I think) sauteed with garlic, onions, sesame seeds, carrots, bok choy and shitake mushrooms. Toss with your favorite protein (I used shrimp and scallops but my Korean aunt always used beef which was delish) and dress with a brown sugar, soy, wine sauce. I miss my aunt, she’s the glamorous one who wears Shalimar and only Shalimar. I wonder if I should ask if she’s noticed the reformulation. On second thought, best not to bring that to her attention.

Speaking of reformulations: Amarige is ruined. I haven’t purchased a bottle in over five years because I stocked up a long time ago. I just bought a fresh bottle and it’s pitiful. I am really sad about this. I have several harvest editions which are fabulous but the original is long gone.

Does anyone else think it’s odd that Luckyscent is now carrying Annick Goutal, Creed and Van Cleef & Arpels?

Santa Fe really lacks a good bagel shop. I’ve been craving fresh NYC bagels and lox. And pizza for that matter. I have found a good sushi joint thankfully.

Anna Paquin comes out as bisexual while engaged to True Blood star. I can’t help but think this is a publicity stunt. That she (and/or her PR reps) think straight guys will have a few daydreams about her bi status and therefore increase her popularity. Maybe I’m a just a cynic.

Have a great weekend and Happy April everyone!

This week's RT were full of news to me. Emu oil? How did I miss that? Have to find out more about this wonderful product.
And Anna Paquin is engaged to a True Blood star? Please not to Eric. I want to still fantasize how great Alexander S. looks in that show. I'm lusting badly after him. :)

I love you!!! You tickle my funnybone!!! Thank you for another charming twrt!!

Ines,
Anna Paquin is engaged to Steven Moyer, her so-far main squeeze on True Blood (which I know changes from reading the books).

Here's a pic of Moyer smiling and without vampire white makeup!:
http://www.latenightwithjimmyfallon.com/2009/06/10/steven%20moyer.jpg

Thanks for the link, Abigail. And you're at the top of my list of favorite bloggers, as well.

I'm sad that Takashimaya is closing, too! But I'll at least get one more spin through the place before it closes its doors. I'm heading to NYC in April, and if they're showing any good sales on Mona di Orio Jabu or "T", then I'll pick some up for you.

Funny that you should mention that you're not terribly impressed with the new Chanel lipsticks. I've been refraining from purchasing them for the upcoming Vanity Bash party I'm throwing in May -- there was something about them that didn't sit right with me. So now I have confirmation of my suspicions. There are plenty of other lipstick fish in the sea.

The best face oil ever, and it smells so good.

Dain,
Thanks for the emu/blend rec!
I'm all over that stuff :-D

Have never been to Takashimaya. This may be for the best...kind of like never getting a chance to smell vintage Vega. Or Djedi. Or [any number of names here].

Indeed, more people need to be FB privacy savvy. Check out the privacy settings. Take the time to go through them all. And know that you automatically forfeit some privacy for any app you sign up for...they ask for your deets up front; even if you don't consent to share them, *they* have them. (Ooooh..."they"...dum dum DUM... ;) )

Happy April to you!

Just a note on Jesse James (and Tiger, etc.). Kills me that these guys try to illicit empathy by saying how much they love their wives and want their marriages to work, as if we're supposed to feel sorry for them??? PULEEEZZZZE!!! Give me a break!!!!

What a fun blog! I must track down AP Strip somehow... love, love, love the original Prada.