Just Because She Can: Lush "Tuca Tuca" and "Orange Blossom" 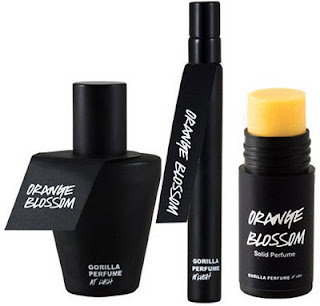 I was excited to learn a month or so ago that Lush had some new fragrances coming out, especially after the news, last winter, that the B Never Too Busy To Be Beautiful scents, sisters and brothers to the Lush line, were being discontinued. It turns out they weren't being discontinued, just re-conceived and repackaged, though getting all those old "B" fragrances at half off was worth the scare.

The new packaging is good news and bad news: good because it doesn't look as cheap as the old packaging; bad because looks can be deceiving. The new packaging leaks--just a little, which doesn't bother me too much. It doesn't leak as much as seep, and I solve that problem by not trying to carry the bottles around or storing them upside down or sideways. I don't tempt fate if I can avoid it. The problem is that the only identification on the bottles comes in the form of a paper tag around the neck. That might not be much of a problem either, were it not for the seeping, which tends to saturate the tags. At least when the tags deteriorate and fall off, you can smell the stuff a mile away. That makes it easier to tell one bottle from the other. Otherwise, they're identical: basic black.

There are more than five new Lush releases but, at least in the U.S., only five are stocked. You can get others online (including the B Never scents, which are now referred to simply as B Scents). I like all of the brick and mortar releases, though I find Imogen Rose and Smell of Freedom to have longevity issues compared to the remaining three. Lust is an indolic jasmine which is, as some have said, pretty sweet. The sweetness doesn't bother me a bit. I love Lust. It lasts forever, and like the best by this brand's perfumers (Mark and Simon Constantine), feels dense and rich, a strange mix of edible, floral, and woody.

My favorites are Tuca Tuca and Orange Blossom. Tuca Tuca is a violet fragrance, essentially, but a take I haven't seen on the note. Vanilla, yland ylang, jasmine, and vetiver round it out. Its creaminess has a doughy depth to it, filling up space the way the smell of baking bread takes over a house with an almost physical presence. Call me wacky, but I don't consider any of these latest Lush (aka Gorilla) scents entirely feminine, let alone whimsical, save for maybe Imogene Rose, and I've always sensed that Lush is a pretty forward-thinking brand, so it was disappointing to read the company's description of Tuca Tuca:

"It's that fun and flirtatious girl inside us all--she's mischievous with a naughty sense of humour and an infectious giggle. She likes to dance like no-one's watching and run through park sprinklers with abandonment, just because she can. She's whimsical, carefree and when the sun shines just right she can go from being sweet to sensual with the bat of an eyelash. Tuca Tuca is the epitome of how fast your heart races when your eyes meet the boy you've got a crush on!"

I think that drivel speaks for itself. Sadly, I doubt that by "us all" Lush means to say men, though as many guys as women have, I'm sure, a girl inside there somewhere. The worst part, probably, is that I can't imagine any such girl I would want to spend tons of time with. I understand Lush is selling to the Macy's walk-through customer. This is the suburbs. Maybe it's me; I'm out of touch. Maybe this fantasy of twee coquetry appeals to women of all ages. Maybe it's simply a tween thing, and should be disregarded, like all the sparkly glitterdust Lush stamps onto its bath balls (There's a thought: are bath balls a coded reference, meant to bring out the inner boy in the privacy of one's own tub?). Still, it's weird. Without the above copy, I would never have guessed that Tuca Tuca wasn't meant to be taken seriously.

I'm obsessed with orange blossom, especially the last year, and I put a lot of pressure on Lush's interpretation. Thankfully, they do it justice. This is probably my favorite orange blossom to date, the antithesis in approach of Penhaligon's recent take, which lasted all of five minutes on my skin, failing to compete with the distractions of the outside world for my attention or anyone else's. Like Gaultier's Fleur du Male, Lush gives interesting dimension and extension to orange blossom with coumarin, going one further with beeswax, a note which produced similarly interesting results in Penhaligon's recent masculine, Sartorial. I could sit and smell Orange Blossom all day, and Lush makes that possible: As with Tuca Tuca and Lust, this one is tenacious.

When I entered Lush at the mall, a sales associate half my age immediately informed me that of the five new scents (she assumed I hadn't heard of, or come looking for, them) two could be worn by men: Orange Blossom, and Smell of Freedom. As I'd already reached for Imogen Rose instead, I had a moment of panic. What if I grow a vagina!?
Posted by Brian at 11/01/2010 10:44:00 AM

I went by Lush the other day to check these out, but the containers all smelled the same, and I didn't see any paper blotters, and I didn't want to try them on skin before going back to work, in case they were disastrous. I'll have to go back soon and give them a real test drive.

Nice to see you back, Brian. Thanks for writing about these - I have been anxious to try them, but can't find a moment to drive into LA or Pasadena. I may have to do a little (gasp) "blind ordering" if I can't control my curiosity!

As far as the vagina goes (bad lead in line....), I think both of us would MULTIPLE vaginas if our perfume collections were some how tied to bodily orifices....don't ya think?

Marko, based on my perfume collection, I would be assessed by the people who market perfume as all vagina, all the time, yes. It's great to be back. I've been too busy to breathe. And it's great to hear from you.

Elisa, yes, the abandonment thing. Did Lush even write this copy? I suppose so. To their credit, I've never seen anything quite like it from them. I wonder if you'd even like them. Almost everyone I've let smell them from my bottles disliked them. For me, they hit the right marks. Definitely robust, though.

Funny thing Brian I once read reviews of such utter pretentious drivel on their site that I vowed I'd never even try them because I'd think of the reviews and well laugh myself half to death. I do wonder aqbout a company that calls a perfume "God's Breath" !!

Hi Brian, it's been a while! Welcome back.

They leak, really? I haven't had that problem yet, but I haven't tried to carry the bottles around.
Maybe that's Lush's way of persuading us to buy the solid perfumes as well, for portability!
As for the labels, isn't there a sticker on the bottom of your bottles? There is on mine.

I'm wearing the Orange Blossom today, and I concur. I also have Smell of Freedom (which lasts well for me) Lust, and Tuca Tuca. Actually I got a bit sick of the latter, having loved it at first. Just too pervasive I guess. I agree it's not at all like the stupid ad copy.

For the most part, I really like the new Lush Gorilla site, Angela. The perfumers talk about their inspirations, interview each other, feedback. And, ugh, tweets. I can live with the tweets. I would love to see more perfumers do this, instead of the bogus "community" manufactured wholesale by Mugler's Womanity.

Tania! I've missed hearing from you. I guess I have to write more. I checked my bottles again this morning, thinking maybe I'd been seeing things--or not seeing them--and there might be labels on the bottoms. There aren't. The one tag which isn't leaking is the Orange Blossom, curiously. I really don't mind. I love the new bottles generally and love the fragrances. I've got Smell of Freedom with me today to see how it fares in the wet, cool weather. I love the ginger punch in the beginning.

I'm going straight to the orange blossom, because as it happens, I sprayed myself full on with Habit Rouge yesterday, which for no explicable reason I had never done before. And once I was done having an inane conversation in my head -- "Rouge? This is orange!" -- I realized I had a zone around me that I was totally enjoying. In a wordless, stupid smile way. Not profound, not deep, nothing I was prompted to write about. In fact, just...happy.

But now that you mention it, over half the Google hits refer to it as "Habit Rouge for Men." Fortunately, I've not come across any copy referring to manly men and hirsuteness of wearer. So I'm thinking I won't need to consult you what special accessories I'll be needing for my new appendage...but your worry is having a chat with my worry...your worry better not be a Mean Girl to my Sensitive Boy.

As for Lush, I give you props for entering the store. The sincere and wishes to be helpful staff combined with close quarters and the fact that I kind of feel like there is some sort of Lush Kool-Aid I should be drinking all make for an uncomfortable experience for this browser. I'd be especially unhappy if I felt gender directed...that's one store I'd think that I would be safer than usual from that in.

Yes Brian, you should write more often! ;-)
I kid. Life does get in the way. I haven't been around much either. A demanding new job put paid to my daytime surfing and commenting. Since the operative word is 'paid', (I'd been out of work for months), I'm ok with that! But I do miss some sites, like this one, so I'm snatching the odd minute here & there.

The Gorilla Perfumes site does perfumista interviews too - I'm on there. But they spelled my name wrong, and I kind of regret writing my interview when I was still smarting from an unpleasant perfume shopping experience. I think it reads a bit peevish.... :-)

Yes, that ginger kick in TSoF. Me too. In fact, I have it in a separate bottle! When Gorilla did their introductory 'event' in London, they had some exclusives, which included three accords from TSoF. An oudh one, a citrus/green, and the ginger tea accord. It was called 'Old Delhi Station'. I got that one. I can wear it alone or amp up the edt with it.

But I did giggle at the name. I know they meant something or other evocative by it, but I've used Delhi station (railway) and trust me, it doesn't smell like ginger! Something to do with the train loos being basically holes opening directly on to the track.....