Monstre: Chanel No.5 as Celebrity Bio 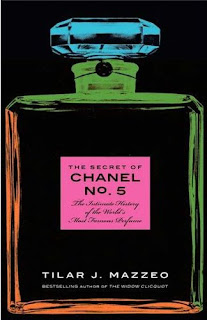 There are many things to like in The Secret of Chanel No.5: The Intimate History of the World's Most Famous Perfume. Biographer Tilar J. Mazzeo treats the perfume as a significant piece of cultural history, focusing not just on the iconic design of its bottle and packaging or the astonishing longevity of its status as a bestselling fragrance but on some of its more ephemeral attributes and properties, many of which are more difficult to articulate, let alone determine. It's the first book of its kind, illustrating the power a fragrance has to contextualize its moment in time. Imagine the possibilities: perfume as social history, as personal memoir, as political thriller. An entire bookcase of such books, transforming the library into a perfume cabinet. No.5 is a good place to start, as its moment in time seems to be occurring in stop motion.

The book begins with a brief sketch of Chanel's childhood as an orphan. It moves from there to her involvement in the demimonde, experiences which mirrored the showgirl background of another, ultimately less fortunate turn of the century figure I admire, equally difficult but brilliant Jean Rhys. Like Rhys, whose most recent biography was named after her favorite perfume, Guerlain's L'Heure Bleue, Coco Chanel became a kept woman. She understood the rub--the ways in which affairs with married men were meant to work--but she was, again, like Rhys, as stubborn as she was passionate. She broke the rules by falling in love, causing heartbreak, loss, humiliation, and in some ways, self-sabotage. As with Rhys, the pattern of dependency and defiance repeated throughout her life, with less than glamorous results, whatever the fashions dressing it all up.

I found Mazzeo's account to be more engrossing once it moved onto Coco Chanel's development as a businesswoman. She was a far shrewder figure than Rhys, but in several ways equally foolish, signing away the majority of No.5's profits to business partners whose reach extended her own. The agreement assured the widespread success of her flagship fragrance but it was a decision she came to regret, and in fighting it, she betrayed her own best interests. This too reminded me of Rhys, whose lover, writer Ford Maddox Ford, helped get her published. Rhys came to resent his hold over her, though she depended on his largesse and influence--as did his wife. Coco's reputation and initial success seem to have been built through the same kind of extra-marital support Rhys alternately enjoyed and alienated. Chanel built herself from the ground up, judging by these accounts, a transformation as radical in opposites and contradictory impulses as the perfume she created in her image.

During the second world war, Chanel fought bitterly against the contract with her partners. The story of her anti-semitic behavior toward them is unflattering and fascinating. She was devious and hypocritical and seems to have refused any attempt at diplomacy. There was a childishness to much of Chanel's conduct during this time, an escalating desperation to maintain control of her image amid the extenuating circumstances of middle age and war. The inflexibility of her position was perfectly in keeping with the extremism of dictatorial Germany. Her own possible, if not probable, collaboration as what some characterize as a war criminal during this time, her affair with a Nazi, is detailed in the biography as well.

After the war, the No.5 contract was renegotiated. Coco willed it to be, by creating her own competing line of perfumes. She badmouthed the name and reputation of No.5, accusing it of inferior quality. Though manufacturing and distributing these newer, unaffiliated perfumes put her in breach of the original contract, her partners were left with no other choice but to meet her terms, much the way a married man must ultimately bend to the will of his mistress, lest he unleash the powers of anarchy she could exercise over his ordered little existence. In this way, the story of No.5 can be seen as an illustration of the collusion and conflicts between ego and id, creator and creation overlapping and co-existing with separate lives of their own, the one influencing the other, rearing its head to expose the mask of public respectability worn by its double. Coco's creation took on a life of its own, and she couldn't always, couldn't often, exert control over it with her own will. Throughout Mazzeo's book it's tempting to imagine Coco's figure dancing beyond the distorted glass of No.5's bottle, by turns trapped in and locked out of or behind her own creation and trying to get back in.

The book details the possible precursors to the fragrance within the industry. It discusses the career of Ernest Beaux, No.5's perfumer. These are fascinating details as well. The more technical story of the fragrance, dealing with its ingredients, its formulation, the influence of aldehydes, the cultivation of jasmine crops, particularly the espionage of smuggling jasmine absolute abroad during Nazi occupation: all are lucid and informative, and clearly related to the larger context of Coco's personality and life. The story is at its best when it has room to breathe. It feels a lot shorter than it wants to be, and in some respects resembles the respectful reformulation of a classic perfume: all the right things are there, in the right combination, but there's a certain lack of oomph in some way, a problem of proportion. At times, a feeling of depth is missing. That might be inevitable in such a short format. This history is a scant 200 pages--which isn't much space for the longest bestselling fragrance ever, let alone the woman who created it, living a number of lives herself in the process. It feels most rushed in the beginning, which is to say: this book-as-perfume's top notes seem a little thin. The middle sections, during the war and after, are more expansive, more substantive. You feel the pulse of various dynamic tensions, the Dickensian interplay of competing narratives which makes a story feel convincingly three dimensional.

It's difficult to determine what inspires the creative impulse. I don't know that Mazzeo's assertions are inaccurate. They're vividly imagined but lack the kind of detail needed for connective tissue. She makes an attempt to link No.5 in some mystical or Jungian way with Coco's orphanhood and formative affairs, to endow motifs of her childhood with talismanic properties. Without sufficient detail, these things seem like something viewed form a speeding car window. They don't resonate as they probably should or leave a proper impression. It's hard to conceive of them sticking with Coco, when they barely stick with you. I understand the urge to define what makes No.5 what it is. But I think that story is best left to the mind of the wearer and the reader. In long stretches of Mazzeo's book, one feels the panoply of weird, dissonant energies coursing through the perfume--that inexplicable alchemy. That's a remarkable achievement, operating as smell does in some strange way. It' an exciting read.
Posted by Brian at 11/30/2010 09:06:00 PM

Brian, I've read several reviews of this new book and yours is the first one to make me want to read it. It is well balanced and offers enough detail to pique my interest. By embracing the contradictory nature of this iconic perfume, as well as "Le Monstre" herself, you have my Amazon wish-list button tingling.

I was excited to find it in the store. The best part was how conflicted Coco clearly was in so many ways. I could have seen about two hundred more pages in this book.