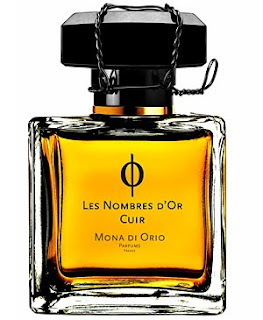 I can't really find an antecedent in Mona di Orio's work for Cuir, which is both a good thing and a bad thing. While several di Orio fragrances have been, like Cuir, pretty bold, they were also a lot skankier, creating a series of expectations and biases around the perfumer's work. Nuit Noire dries down to what Orio retailer Luckyscent refers to on its website as "a barnyard-y animalic dirtiness" which wasn't everyone's roll in the hay. Even Carnation and Oiro have more than a whiff of the underbelly to them. Cuir is no less an affront in ways I find appealing, but in an entirely different direction.

I like Nuit Noire very much, and when I read about Cuir, part of the perfumer's Les Nombres d'Or line, I assumed it would be an elaboration of that somewhat notorious fragrance. Given Orio's treatment of the indolic and the overripe, I expected Cuir would be a sort of apogee for her sensibility, a sublimely ferocious, unwashed leather. Cuir isn't unwashed, and it isn't particularly feral. It doesn't seem in keeping with anything else Orio has done--had it come in packaging other than her trademark champagne bottle muselet, I would never have attributed it to her--but it's a fantastically remorseless fragrance, and it bums me out that her reputation for a special brand of skank and an unfairly malicious and dismissive rap from critic Luca Turin might keep people from giving it the time of day.

Cuir doesn't particularly smell much like a leather to me, either; no more than Parfum D'Empire's Cuir Ottoman does, I guess. Luckyscent calls it carnal, and I can understand why. A few months back, I reviewed Incense by Norma Kamali, another arguably carnal scent, if by carnal you mean in part unapologetically robust. Cuir initially reminded me of Incense--the stuff is unmistakably strong--though for all its assertiveness, there's a weirdly unique delicacy to Cuir. When it first goes on, you smell the cardamom and the cade, something close to smoldering spices. The cade isn't so brutal that you can't make out the cardamom, so there's a balance going on there, but a tricky one, and Cuir very nearly tips the scale into overkill. Incense doesn't have that kind of tension. It has a glorious bombast which Cuir shies away from, if only just. It's full throttle, out the gate, and straight to the grave.

Both fragrances are smoky to the extreme. Incense is much more resinous, whereas Cuir smells more like something you'd walk through than on. Supposedly there is opoponax in the mix. Who can smell it, under all that smoke? More immediately apparent is the castoreum, which gives the affair something approaching wet animal hide, rode hard, put up wet, now roasting on a spit. This is really the whole story to Cuir, but this simple constellation of elements is more than enough, telling a bigger, more complex story than fragrances with twice to three times the ingredients.

I love Cuir, and I know it will last me forever. It's sometimes--okay, frequently--too much for me. A little goes a long way, as they say. But what a road that is to go down, even just dipping my feet in it. I believe there's a much needed place for these fragrances, now more than ever, and far too few of them. They adjust one's barometer, demanding of you a certain kind of attention and commitment. They cleanse the palate by overloading the senses. With so many fragrances pandering to lowest common denominators, endlessly dumbing themselves down, seeking shamelessly to be all things to all people, something like Cuir is a handy reminder of the refreshment a willfully difficult scent can provide.
Posted by Brian at 11/13/2010 03:35:00 PM

Hey, thanks for the review. Yeah, I noticed that Luca Turin did that a lot - brutally criticized one person's work and fell all over himself complimenting other perfumers, regardless of what their portfolio contains.

I found myself nodding at your words in the last paragraph.
I'm not a huge fan of incense as often it can take me to a Catholic mass experience where incense seems to make me feel like I will faint as I cannot breathe (I no longer put myself through those kind of experience). :)
What I wanted to say is, that I agree there should be more perfumes that "adjust the senses" and "clean the palate" as you said. For me Timbuktu does that (and I wouldn't mind having more of those type of scents).

Have you sampled all of the Mona's? I've only sampled the Nuit Noire and I LOVED it - but that was about 3 years ago and from a small leaky tiny little tester. I would have purchased a full bottle at the time, but I was trying to be frugal and now regret that it is so hard to find.

I, too, am bummed that Mr. Turin's personal opinion became the gospel truth for many people (he not only dogged Ms. Mona, but another favorite of mine, Lorenzo Villoresi....maybe he has something against Italian perfumers? I can't remember if he talked much about Laura Tonnato - the supposed "Italian Nose")

Regardless, I will put the Mona's on my list to try and look forward to smelling like a "smokey barnyard"....I mean, who wouldn't?

One last thing - I ordered (blindly) the Lush scents that you liked so much and you were spot on with the Orange Blossom - it is quite pretty - reminds me a bit of Gaultier's Fleur de Male, but less powdery in the dry down. Tuca Tuca is one that I will have to live with for awhile.....either the bottle is "bad" or my nose is "off" from all the winds here in So Calif, but I get nothing but "ASS with a smattering of violet leaf".

Let me know what you think of the other Mona's if you get a chance.

Hi Marko. Not a fan of Tuca, huh? I still love it. I agree about OB and Gaultier's Fleur. I continue to love Fleur. Lush OB has a creaminess to it I think is unique.

I have smelled the Mona's. Nuit Noire was by far my favorite. I considered Oiro instead but Nuit stuck with me. Oiro seemed superficially similar enough that when I went back for another it wasn't that, though I loved it. The Nombres series isn't so fantastic to me. I haven't smelled the last few releases before it I don't think. I smelled the Nombres Musk and wasn't in love. I'm not generally a musk fan in any way shape or form. Totally lost on me, literally. Cuir is one of my favorite discoveries this year, along with Incense. There's something so forceful and majestic about them. People often say that they want to wear their fragrances, not the other way around. I don't mind a fragrance wearing me in the slightest. I like the surreal drama of that, particularly when it's an unusual fragrance like Cuir, which check marks some of the eighties masculine leathers but ultimately cuts its own path. I also appreciate the packaging of Mona's fragrances. Especially the Nombres series, which come in a red box with lack velvet lining. Getting it in the mail feels like something sent from another century, when objects were invested with a lot more intrigue and importance.

BTW, I really like Villoresi. Teint de Neige, Carnation, and Donna are favorites but my ultimate favorite is Yerbamate. Perfume the Guide slammed it as if swatting a pesty fly. A gnat, perhaps. A fly is maybe too significant. I wore it again the other day and remembered how much I love it. It's amazing, fairly indescribable stuff, which might be why I haven't reviewed it. Or maybe I have. After three years I forget.

I'll have to try this Cuir. I love Nuit Noire, as it is -- as you so perfectly put it -- a surreal experience. I love it when a perfume can do that.

Most leathers have that huge dose of IBQ, and the bitter harshness of that has begun to put me off a bit. Wondering how it's used in this one.

Hey Brian thanks for reviewing this. I've been really curious about it. Leathers have held some fascination for me now since Cuir de Russie came my way. And as a skank lover, I want to give this one a go!