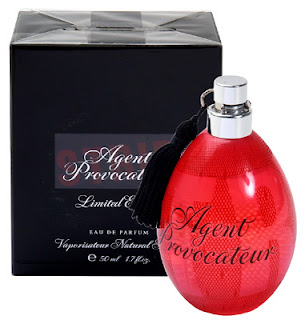 Brian surprised me with AP Strip as a gift.  I had never heard of it and had no idea what the notes were or how it was described in the ad copy.  I love blind smells like this.

Strip launched in 2007 as a limited edition.  The limited edition part is what is so unfortunate.  Many consider the original Agent Provocateur to be their best fragrance but I think Strip is easily the best from this brand.  After I read the notes list I started to smell Strip quite differently.  See how marketing shapes our impressions…how that little notes list makes you smell things you never might have smelled before?  Anyway, the listed notes are Ylang Ylang, Iris Bud, Geranium Bourbon, with Amber, Vetiver, Exotic Woods and Musks.  It’s so interesting, how clearly I smell geranium…and ylang ylang at the start after knowing the notes list.  But now that I’ve been smelling Strip so closely, it’s become a real kaleidoscope of a scent for me.  Now I smell a boozy not-especially-sweet vanilla atop fresh loose tobacco.  What I originally thought was a nice and likeable powdery amber has become a fascinating floral amber tobacco.

For some inexplicable reason, I’ve been having difficulty with all my ambery orientals lately.  I have a ton of ambers and suddenly they all smell so awfuly musty I can’t wear them.  Histoires de Parfums Ambre 114 is musty.  Maitre Parfumeur et Gantier Ambre Precieux is musty.  Annick Goutal Ambre Fetiche is musty.  Dior Ambre Nuit is musty, musty, musty.  This is driving me crazy and I’m hoping it’s a phase which will pass quickly!  But, thankfully, Agent Provocateur Strip isn’t musty and I’ve been able to wear it, with pleasure.

Agent Provocateur Strip has a decent amount of sillage and its longevity is good, about 6 hours on me.  Since I never saw the ad copy from Agent Provocateur I’ve made up my own image of what this scent is all about.  Strip isn’t some sleazy, overly sweet stripper body spray.  In its first 20 minutes Strip unfolds with citrusy geranium, ylang ylang and boozy vanillic rum.  Once Strip dries down a fresh tobacco accord emerges atop a non-musty and dry woody amber base.  Strip has a wonderful quality of being a bit boozy and a touch sweet yet stays an overall dry fragrance.  Strip is really wonderful.  Sometimes, mostly when I’m smelling it from afar or the next day on my clothes, I smell the powdery amber-patchouli scent I smelled the very first day I opened it from the box.   But most of the time, when it’s freshly applied or when I’m sniffing it up close I smell a dry boozy tobacco-wood-amber scent that is just fantastic.  Agent Provocateur Strip is both cozy and interesting.  Brian done good.

Ooooh, I LIKE Strip! I found it at TJMaxx one day and bought it on a whim...imagine that. :)
When I first spritzed it on my skin I thought -- Coromandel!
There is a similar amber/patchouli vibe going on there to my nose. Of course, once the drydown begins, there is not so much similarity. BUT....I love both of them.
Too bad I fall in love with so many hard-to-find limited edition or discontinued scents.
What is up with THAT?!?
Thanks for the grand review. I love this blog.

I've been wanting to try this since I read about it in Perfumes: The Guide; but I think it was already discontinued at that point. Great to have your review of it!

Oh, blast it! I didn't know they wrote about it in The Guide, I thought I was the lone pioneer who knew the beauty of Strip!! I'll have to check what they said about it... :)

Great review - They still sell this, I found it on www.perfumeferret.com - I am in love with this perfume!