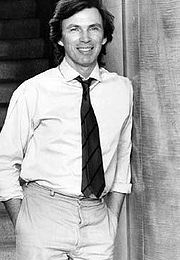 When I was in my teens, Perry Ellis - the brand as well as the designer, the two of which were inseparable in my mind - represented something unique culturally.  While not openly gay, Ellis and his sensibility felt that way to me.  Something about him set my radar off; maybe the way he concluded each of his shows by skipping down the runway.  You didn't see Oscar de la Renta skipping.  Even ruffled Ralph Lauren kept his catwalk appearances to a stroll.  Ellis was boyish and good looking and had an aura of charming, all-American insouciance about him.  He wore his hair long and looked like something between hippy and private school graduate.  He was preppier than Calvin Klein and Ralph Lauren, whose images seemed forced compared to his, and he conveyed a sense of warmth, good humor, and accessibility their personas and clothing lines didn't quite express.

In fact, Ellis was a shrewd businessman, with a masters in retailing.  There was no one like him in fashion or in the media, and his clothes, first for women, then for men, were meticulously thought out iterations of relaxed, unstudied comfort.  He knew the industry inside out, having started as a buyer and a retailer.  And in contrast to his carefree, candid social demeanor, he led a scrupulously invisible private life, well outside the consumer's eye.  His death from AIDS in 1986, at the height of his fame (and success), came as a shock which contrasted deeply against his public image.  He was one of the first quasi-celebrities to die of the disease, at a time when much fear and hysteria surrounded the epidemic, and that fear and hysteria cast a pall over his memory.  Compared to the omnipresence of his brand and his image at the time of his death, he's all but forgotten as a personality now.

But I remember him, and the feeling that seeing him in print gave me, and I remember his first fragrance for men, which remains something of a classic for me.  That fragrance, called simply Perry Ellis, might have done much better commercially, had it not been released in 1985, the year before he died.  Like the death of Rock Hudson, the death of Perry Ellis was not perceived just as a shock among the buying public but as a betrayal, signifying deceit.  It destroyed the myth implicit in the Perry Ellis image, suggesting a host of things that contrasted sharply and darkly with the all-American persona which had generated around the man.

It probably didn't help that Perry Ellis for men also contrasted with Perry's public image and complicated the casual, unstudied-seeming elegance of his clothing line.  It was darker and moodier and a bit more secretive than might have been expected.  Had it been more in line with Perry Ellis for women, a bright, somewhat crisp floral aldehyde released the same year, it might have persisted a bit longer in the marketplace, but I doubt it.  The damage to the Perry Ellis public image was too extensive and complete, the fragrance too palpably at odds with the line's sensibility, too well aligned with the sense of shrouded contradictions and finality surrounding Perry's death.

At the same time, Perry Ellis for men is emblematic of the masculines which were its peers.  It fits within the trajectory of potent, aromatic fragrances such as Grey Flannel (1975), Polo (1978), Lagerfeld (1978), and Oscar Pour Lui (1980), to name only several iconic scents roughly from that era.  Classified as a leather, it has dark chypre qualities as well.  The oakmoss in Perry Ellis is deeply submerged within a carnation note, which is startlingly robust upon application.  Galbanum lends the proceedings a burnished herbal effect.  No spices are listed but they're felt, and it's doubtful this is just the clove influence of carnation.  The fragrance feels peppery for much of its duration.  Vanilla, rose, and a leather accord round everything out.  Perry Ellis is unquestionably a leather composition, and one of the more interesting leathers of that time, I think, in that it walks various fine lines between floral and spice, leather and moss.

An anniversary edition of the fragrance was released within the last several years.  While it's perfectly nice, and generally in keeping with the original, it's a slightly different fragrance, essentially more synthetic, its rough edges less contoured to balance out the composition properly.  It feels like the work of a less seasoned perfumer faced with economic and artistic constraints his experience doesn't endow his imagination to handle effectively and resourcefully.  I found an older tester bottle in a discount shop in town, and prefer it.  The newer Perry Ellis shouts a bit more and gets what it has to say off its chest pretty quickly, after which it shrinks.  The older version goes on much more richly and, though it dries down fairly quietly as well, maintains its deep, enigmatic tone throughout.

Perry Ellis for men feels emblematic of the designer's secret life to me as well, so there's something melancholy and irreconcilable in it, a quality I appreciate on a fall day, when happy thoughts go hand in hand with more troubling ideas.  The brand has released many fragrances since, but all have been much more careful to correspond to the public image of the label, and they lack the drama and the undisclosed mysteries of this earlier scent.
Posted by Brian at 9/10/2011 03:23:00 PM