Leather Fruit: CK One Shock for Him 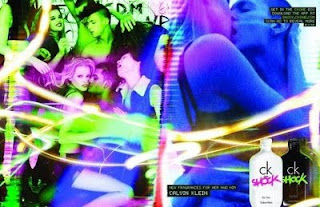 The most shocking thing about CK One Shock is how good it is, compared to how mediocre it should have been.  What of note has Calvin Klein done in the last several years?  Secret Obsession, Beauty, and any number of interchangeable flankers have been disappointments - even the pleasures of Euphoria were pale in comparison to the brand's great fragrances of the eighties and nineties.  Obsession, Escape, Eternity, and CK One, however repugnant to some, were distinctive enough to warrant strong opinion, and each seemed to encapsulate its era through a radical marriage of scent and sensibility.

There have been many seasonal Ck One successors, none of which I paid much attention to.  By now, these iterations are so far removed from the original that they have nothing to do with it, and Shock, particularly, has more to do with other lines and other trends in perfumery than it has to do with the original CK One.  In that sense, it can be viewed as redundant, but Shock coalesces these trends in such subtly surprising ways that, for me, it transcends its influences, and feels altogether new.

It borrows much from Bulgari Black, Van Cleef & Arpels Midnight in Paris, Paco Rabanne One Million, and Jean Paul Gaultier Le Male, to name only several, but it doesn't read like a compendium; nor does it feel derivative.  It has some of Black's strange rubbery facets, making much more of them than the lackluster Givenchy Play Intense did.  It has shades of the fruity spice undertones overdone in One Million, subtle black tea hints from Black and Midnight in Paris, the tension between sweet and tart played out at maximum volume in Le Male.  It is strong but subdued, feeling much more like a niche release than a mainstream mall fixture.  At times during its development it reminds me of Santa Maria Novella's wonderful Nostalgia, part asphalt steam and the friction of tire against road, part floral, part fruit and spice and leather gloves.

The notes are laughably inventive.  It's described as an oriental with mandarin, cucumber, Red Bull accord, pepper, cardamom, tobacco, ambrene, musk, and patchouli.  I've also heard: black basil.  Of these, I can identify nothing definitively but the tobacco, which is where the fragrance ultimately comes to rest, in a wonderfully soft, powdery sweet melange of cigar stub and sugared rubber.  This dry down is wonderful, but the real moment of distinction in Shock, where it earns its name, is upon application.

The combination on skin isn't something I've smelled before - not quite.  It's as if Shock reassembled familiar motifs, changing the chemistry of their individual properties through skillful, well calibrated combination.  I get spices and leather, a wonderful balance between opposites.  This isn't the effervescence of a citrus but the succulence of something like a peach or a ripe mango.  Mind you, I don't smell either of those fruits in the mix.  Just their quality of succulence, and it's perfectly tempered and muted by a phantom sense of florals which apparently don't exist here.  I smell the ghost of jasmine, personally; probably an illusion created by the mellow alliance of leather, spice, tobacco, and musk.

I would never mistake this for a feminine, and in fact it seems less commercially unisex to me than Bulgari Black.  It announces itself pretty emphatically as a masculine, and yet in overall effect it isn't quite like any masculine I know, however many fragrances of the category it recalls or references.  Ultimately this is what makes it most literally and refreshingly unisex to me.  As on a man, on a woman it would seem familiar but distinctive, the smell of her leather gloves mingling with her perfume and the events she's just experienced out on the road.  It feels unisex, in other words, in a way which isn't marketable, which is probably why there is a feminine counterpart on the other side of the store.

Once it arrives at its tobacco base, Shock goes on indefinitely.  It has minimal but decent projection.  It is just odd enough, and I would love to see more mainstream releases achieve this kind of delicate alchemy.  The ad campaign and the design of the bottle demonstrate how entirely accidental this accomplishment of novelty is, referencing not the moment but some moment past, drunk on the look of a Stephen Sprouse ensemble from the mid eighties.

Oooh. I was so intrigued when I first read this list of notes. Red Bull accord! I've gotta check this out.

Speaking of flankers, I was also sort of interested in Flower TAG, but it smelled to me like a version of Armani Sensi or maybe Moschino Couture. A nice fruity floral but utterly familiar and not really related to Flower.

I smelled Flower Tag while I was at the mall. I agree. The mall is so depressing here. There's no "there" there any more. The contemporary mall is more banal than I ever remember, and when you get into smaller cities the situation is even more depressing. Shock was a nice...surprise. Honestly, so was Khloe Kardashian Unbreakable, which is like the Taj Mahal thus far, next to SJP Lovely, of celebrity scents. It's got this great coco geranium thing going on. SO much better than it had to be, in a way that feels entirely accidental.

Wow, really? Geranium is one of my favorite notes.