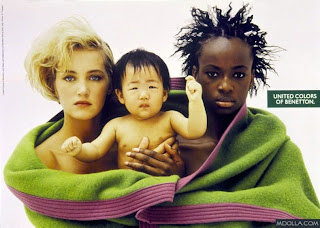 It's probably unfair to review this one, as the liquid currently sold under the name doesn't much remind me of the original version, a bottle of which I was lucky enough to find at a discount store.  But the old Colors is such a great fragrance, especially for autumn, and so curiously forgotten, that I can't resist.

At one point, Benetton was, along with Esprit, an interesting anomaly at the mall.  The windows of the store popped with primary color in an otherwise boring beige granite landscape, and the ads, early on, were an energetic antidote to the unconscious xenophobia of my midwestern upbringing.  Say what you will about those ads - eventually, they were a logical point of contention for many: they were virtually the only thing in Vogue, short of Naomi Campbell, pointing toward a more diverse cultural color palette.

The clothes never thrilled me much.  I was shopping at thrift stores - looking for that perfect hue of sixties ochre or pea green - diametrical opposites of the bright greens and yellows at Benetton.  And until I found this bottle of Colors recently, I'd forgotten the fragrance myself.  Yet, smelling it now, all kinds of memories come back.  I was surprised it was so familiar, and it occurred to me that many girls I knew back in high school must have worn it, though it had a lot of competition.

Many of these are still in production, and continue to move the units at breakneck speed, and it could be argued that they've survived so centrally in the marketplace because they were more memorable to begin with.  I don't have the data to support or dispute that, aside from pointing out that Calvin Klein and Givenchy have a bit more corporate muscle than a pint-sized Italian upstart, however daring its approach.  I could also argue that few fragrances could have survived the onslaught, the following year, of the cultural behemoth known as Eternity, which seemed to shift everything - the way women wanted to smell, the way they wanted to come across, the way they wanted to live, etc.   In short, they wanted to live in a fantasy world that looked like the Eternity ad campaign.

But for me Colors has something none of its competition did.  One of the earlier forays into fruity floral, it was piquant in a way you didn't typically find at the fragrance counter.  Those early fruity floral touches were nothing like their modern spawn.  They didn't feel like bubblegum disguised as a fragrance, and they integrated their fruity elements more judiciously - in a way which felt more in keeping with the classical fragrances you were used to.

Colors is a curious medley of these fruitier notes (pineapple, peach), herbal touches, well blended florals (the notes list tuberose and jasmine but I wouldn't have been able to name them without looking), and oriental mainstays (patchouli, civet, oakmoss, opoponax).  You notice the peach and pineapple first, but rather than the syrupy compote you get in the modern fruity floral, Colors presents them more delicately, augmented with sage, vanilla, and the slightest hint of civet.  It's hard to imagine a fruity floral of today with civet, or patchouli which isn't scrubbed clean of anything making it recognizable as such.  A tricky combination, but Colors shows how well it used to be pulled off.  That peachy softness lasts for quite a while before the fragrance descends into its heart of muted vanilla and orange blossom.

Colors is a strong, long lasting fragrance, but a mellow wear.  It's classified as an oriental, not a fruity floral, in fact, and the use of vanilla and orange blossom (both of which I smell right down to the bottom) give it an overall creaminess which comes closer to LouLou and Ysatis than any of its other competitors.  It feels younger than the latter; a little older maybe than the former.  It's miles away from the powerhouses of its time - Poison being a good example - and I wouldn't say it's as strong as many of the louder fragrances currently front and center at the mall.

It was created by Bernard Ellena, who did another little one-time sleeper for Benetton called Tribu.
Posted by Brian at 9/25/2011 12:35:00 PM

I don't remember Colors, but I had Tribu -- a gift from the DH, around '94. It was odd, fruity, with the ugliest bottle ever created (plastic, gold and maroon, with a plastic ball on top). I may still have it around somewhere. I guess it must have been an early fruity-floral too, more fruit than floral.

I remember liking the ads... and also that I stepped foot in my mall's Benetton store only once, never returning after I'd seen the prices.

I don't remember the scent, though.

How funny.....working at Benetton was my first job when I moved to LA to become "famous". It was a little store on Ventura Blvd. smack dab in the middle of a fancy "strip mall" between Politix Clothing (big, oversized, unconstructed linen jackets with HUGE shoulder pads and leather pants in every color you could think of) and a Penguin Yogurt. Aside from the super-detailed folding techniques we had to learn and master, it was a fun place to work....lots of "stars" shopped there (Howie Mandel was a total dick, Janet Jackson was shy and humble and George Michael smelled like pot).

I drenched myself in both the Men's and Women's Benetton fragrances when I worked there and often wish I could find a bottle of the "vintage" - you are so right, it has been reformulated so many times the current version smells nothing like the original.

Thanks for the trip down memory lane....and a much belated congratulations on the success of your film - I was so hoping to get in to LA to see it at the festival, but was out of town that week. Will you be back to LA when Luckyscent premieres the new Tauers?

I had a bottle of Tribu also - still have it actually! I should spritz some tomorrow and remind myself - I loved it so much back in the day.

I was just thinking about the original Colors last week, when I tried the latest one in TKMaxx and recoiled in disappointment. I hadn't known it was still around, reformulated. (If you can even call it that, since the new one is just dreck, IMO).

I can still remember the original, which I loved when it came out, and I have a strong memory to go with it. I first wore it on a trip to see Les Miserables. I'll always associate original Colors with the emotional rollercoaster that was Les Mis, seen for the first time. I must have used up two or three bottles in the 80s.

I think I'd like to find an old bottle, though apart from fleabay, God knows where I could look. We don't seem to have the same kind of discounters replete with old bottles, over here.

I took this visual media class last semester and the professor did a lecture about the Benetton ads one time, making stridently clear that his conclusion was that they were distasteful shock ads masquerading as social awareness- that they needed to explanatory text in order to get their point across. He was completely wrong, of course: the ads are fucking brilliant BECAUSE there is no explanatory text, BECAUSE they were selling boring clothing with a photograph of a man with AIDS on his death bed and photographs of death row inmates and photographs of nuns kissing priests. Benetton as it is now is so completely pointless- ads with pictures of models just standing there in boring-looking pajamas, so all of their detractors finally got what they wanted.

This reminds me of the brilliant quote from Todd Solondz's Storytelling..."She's just a spoiled suburban white girl with a Benetton rainbow complex."