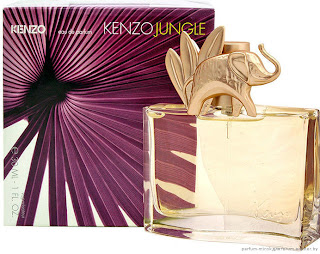 About four years ago, Brian sent me a decant of Kenzo Jungle L’Elephant with the idea that I’d fall head over heels in love.  I tried it and I was confused.  Jungle L’Elephant wasn’t awful, but I just couldn’t understand this fragrance in the least.  This doesn’t happen to me often.  In fact, I think this is the first time I ever experienced a fragrance in an entirely new way several years later.  The first several tries (and I definitely tried this stuff at least a half dozen times) on skin I found it to be oddly fuzzy, blurry, almost hazy and wiggly.  I remember it tickled my nose and made it feel twitchy.  Jungle L’Elephant seemed a little gamey and very, very murky.  I could never get past this furry murkiness to evaluate the fragrance.  Back then, I thought this strange sensation was the sum total of the fragrance and I just didn’t get it.  I never disliked it; I just found it to be an unusual olfactory experience.  So many reviews described Jungle L’Elephant as spicy, cozy and wonderful but I just felt left out of all the fun.
Fast forward almost 4 years to Monday of this week. Orders for The Posh Peasant were being filled by my part-time helper as I walked into the room.  The air was filled with this amazing smell. I stopped in my tracks.  Normally, I can identify what has been sprayed fairly accurately.  I’m familiar with almost every fragrance we have in stock.  But this…this amazing smell…was completely new to me.  It was spicy and warm but not foodie.  The aroma lingering in the air wasn’t dense but diffuse, it was clearly an oriental with gorgeous spice notes but not one I was familiar with.  At that moment, if I had to guess I would have suggested it was something like Amouage Epic…but without certainty.  I knew this totally new-to-me perfume was something spicy and slightly sweet but very unusual.  I considered maybe it was something new that I hadn't smelled yet.  Finally I just asked what it was that had just been sprayed and was told “Kenzo Jungle L’Elephant.”  I was shocked.
So now that I had smelled Jungle L’Elephant in the air, not concentrated on my skin, I was able to smell the spicy cinnamon-clove-fruity goodness that everyone else had been enjoying all these years.  It was as if I was only able to smell the table of contents in the past and never engage with the main story.   It was amazing.  This unknown scent lingering in the air was something I had been longing for, for quite some time.  I’ve always wanted an oriental gourmand which is spicy and cozy, potent yet not headache-inducing, gourmand but not edible/foodie and most of all, Abstract.  Jungle L’Elephant has recognizable spices like cinnamon, clove, cumin and cardamom with some unrecognizable fruity sweetness (if I had to guess I’d say the fruity quality smelled slightly of raisin) all set against this very furry cashmeran-type backdrop giving it an overall abstract style instead of smelling like any of these particular notes.
Two similar fragrances are Serge Lutens Feminite de Bois and Dior Dolce Vita.  I’ve never been a fan of Feminite de Bois, it’s always registered as stewed fruits over too-much cedar on me.  I have enjoyed Dolce Vita in the past.  A former colleague of mine wore Dolce Vita in the late 90’s and it smelled stunning on her.  The difference is that Dolce Vita has a much stronger white floral quality while Jungle L’Elephant doesn’t have anything recognizably floral to me.
The perfumer behind this abstract spicy gem called Jungle L’Elephant is Dominique Ropion.  Ropion is one of my absolute favorite perfumers since he created some of my (nostalgic) 90’s favorites, Givenchy Amarige and Ysatis as well as my favorite tuberose, Frederic Malle Carnal Flower and a mid-2000’s favorite which nobody talks about these days, Lalique Le Parfum.  Now that I’m IN LOVE with Jungle L’Elephant I’m wondering if there’s also a chance for me to love Frederic Malle Une Fleur de Cassie.  Une Fleur de Cassie is another Ropion creation I’ve never understood.  Similar to Jungle L’Elephant, Une Fleur de Cassie also has a blurry/murky/furry/fuzzy quality I just can’t get past.  Perhaps I ought to have someone spray Une Fleur de Cassie in the air so I can smell its aroma, diffusely about the room?  Frederic Malle Portrait of a Lady, another Ropion creation, also has a similar furry/blurry quality…hmmm…I’m seeing a pattern here.
In sum, it took 4 years but I am smitten with Kenzo Jungle L’Elephant.  It is gorgeous and I will never be without it. Others have found Jungle L’Elephant to be overly strong.  Maybe I have fume-eating-skin but I don’t find it to be terribly strong at all.  It’s potent for the first 30 minutes but after that it mellows and doesn’t have mega-watt sillage.  I only need 2 sprays, but it ain’t no Angel on me.
Top notes: Mandarin, Cardamom, Cumin, Clove
Middle notes: Ylang-Ylang, Licorice, Mango, Heliotrope
Base notes : Patchouli, Vanilla, Amber, Cashmeran
As far as it’s having been discontinued, I can still see it on the Kenzo USA website, so all is not lost (yet).
Other reviews (here are 5, but there are many more reviews of Jungle L’Elephant):
The Non-Blonde
Perfume Posse
Brian’s review here on ISTIA
Eiderdown Press
Sorcery of Scent
Posted by Abigail at 1/13/2012 10:05:00 PM

My anti-perfume sister will only wear one of two scents: Kenzo Jungle L'Elephant and Serge's Miel de bois. She says the Jungle smells like the scratch 'n sniff Halloween stickers we had as kids. Must be the spices!

I've tried it several times. On me, it smells a lot like Lysol concentrate. Hate when that happens.

This is one of my favorites. Somewhat puzzlingly (since it's so very strong) it is also one of the perfumes that ALWAYS yields compliments. I was once told by a straight male coworker I smelled like a "really, really expensive prostitute," my favorite compliment I've ever gotten. I love how heavy the bottle is, too.

This is one that I hope to track down some day, as it sounds so wonderful and I LOVE the bottle. Thanks for the review!

Based on your review, I arranged a swap for a mini of this. Love straight from the bottle. But the dry down is a little...too much prune. I'm going to continue trying, though. If you love this, I suggest you try to sniff Bryredo's Seven Veils.

thanks for your suggestion of Byredo Seven Veils. I have not sniffed that one yet.

I do hope Jungle L'Elephant becomes a winner for you! On me, I can't specifically identify a prune note, but there is a jammy/fruity sweetness that envelops the whole thing.

I ha d th same approach to this fragrance I first received as a gift...at first smell i didn't like it at all..! After a few time I smelled the whole 2story£ and will never depart from it...what is more it's quite difficult to find and to be undersood...as a result I feel it is almost unique for me