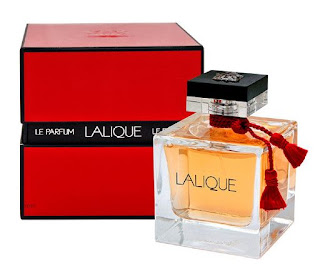 The notes list is fairly helpful with this one.  I’ll post the notes here and then discuss further below

Lalique Le Parfum begins with a minty-pepper quality positioned atop a boozy whipped vanilla base.  The vanilla is so frothy and fluffy it makes me think of a down-stuffed pillow, filled with the finest white feathers but also the softest and most powdery marshmallows.  The minty and peppery top notes are slightly green and herbaceous and a wonderful contrast with the sweet fluff found beneath.  What I’ve decided after many years is that Lalique Le Parfum is unusual because it showcases a beautiful tension between two seemingly contrasting accords, the minty-pepper top over the sweet, fluffy base.  For me, the top notes stick around throughout and never leave the vanilla all by itself.   There is a touch of patchouli in the base, which I don’t think of as especially noticeable, but I know it’s there because it tempers the sweetness of the frothy vanilla and almondy heliotropin.

I normally can’t wear vanilla-centric fragrances so you know if I love this there must be something different about it.  Lalique Le Parfum is not an edible gourmand.  Even though I’ve described it as smelling like fluffy vanilla and marshmallows it’s still an abstract oriental and not a foodie creation.  Lalique Le Parfum makes me think of candy canes and powdery snow.  There’s a chilly effect and I imagine myself peering through a frosty window from the outside as a wintry wind swirls snowflakes around me as I gaze into an elegant dining room decorated in white and gold with a centerpiece made of peppermint candies.

Dominique Ropion is the nose behind this wonderful fragrance.  It was released in 2005.  When it was first released it was expensive, but now it can be found for a fraction of it's retail price.

I had a cute little mini of this, and really wanted to like it as I have a lot of time for Lalique as a house. Sadly, on my skin what I have heard described as the cumin-heliotrope accord did not work for me. It was too unusual, if you will, a problem I also have with CdG Daphne. The mini was rehomed with a swapper in Melbourne, and I miss its lacquered finish and sassy tassel still...