Vanilla perfumes for those who dislike gourmands 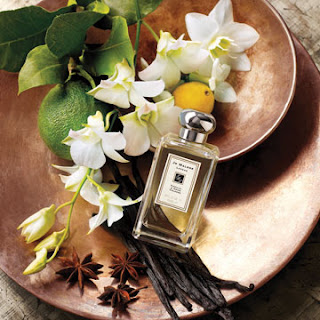 If you’ve read here before you probably know that I’m not a lover of gourmand fragrances.  I have two major issues with gourmands; 1. They make me hungry and 2. I’d rather not smell like actual desserts.   The few times I’m worn things like Serge Lutens Un Bois Vanille, Guerlain Spirituese Double Vanille or Guerlain Tonka Imperiale I find myself stopping at Starbucks for a latte and 3-piece order of their petite vanilla scones or whipping up a spontaneous batch of cookies at home (no joke).  I can't even burn vanilla or foodie scented candles in my house as I've been known to burst into random baking episodes due to the yummy aroma.  Obviously, I don’t need any sort of encouragement when it comes to my sweet tooth so for the sake of my waist line can’t wear gourmands.

Even so, I still have the desire to wear comforting vanilla scents once in a while.  After thinking I simply couldn’t wear vanilla prominent fragrances I found a category of vanilla scents that I can wear.  I’ve come to think of the first three in the below list as “cologne vanillas” because they incorporate a fresh citrus quality in their top notes and once dried down these fragrance never veer too foodie for my liking.  The fourth fragrance on my list isn’t fresh or citrusy but it’s a dry, herbal vanilla.

Jo Malone Vanille & Anise
The Non-Blonde reminded me of this underrated gem the other day when she reviewed it.   I don’t think Jo Malone’s Vanille & Anise was met with high praise precisely because it isn’t a sweet, foodie vanilla scent.  I would guess that most people wanting a vanilla fragrance would expect something with the name “Vanille & Anise” to be mostly vanilla extract, licorice and heavily influenced by candied desserts.  JM Vanille & Anise is a light, air-spun fragrance that begins with a fresh citrus character and ends with a slightly sweeter but dry anise-vanilla quality. For the first few moments JM Vanille & Anise does make me think of a dessert, but it’s lemon meringue, with its white meringue top impossibly high and air-filled.  Jo Malone Vanille & Anise loses most of the citrus notes once dried but never becomes dense, it remains gauzy and effortless.

Creed Sublime Vanille
I wrote about this back in 2010 and have continued to find it to be a wonderful ‘cologne vanilla.’  It’s essentially a classic eau de cologne over a fairly dry vanilla base.   It wears and smells so simply which is why I’d be a lot more excited about it if it didn’t cost as much.  For a seemingly simplistic fragrance the price might make you balk but I’ve come to terms with the cost and find Sublime Vanille to be a worthy addition to my (small) collection of wear-able vanilla perfumes.  Sublime Vanille has slight citrus tendencies at the start and dries down to a fresh, vanilla-cologne for any occasion and any season.

Atelier Vanille Insensee
Like the two above, Vanille Insensee is a beautifully rendered vanilla lying beneath a fresh beginning of lime and citrus.  There is vetiver and moss in the base keeping the vanilla in check, never veering too foodie.  Vanille Insensee can be worn year-round.  Even though “fresh,” “clean,” and “sheer” often spell AVOID in my perfume vocabulary book, this fragrance is all three adjectives and yet it’s absolute love, bliss and vanilla-genius.

Annick Goutal Vanille Exquise
Vanille Exquise is not a cologne vanilla but instead an unusual herbal and dry vanilla.  There is a note at the start which bothers some people and I think this note is angelica.  It’s a jarring start, like a sharp, herbal knife to the nose.  In almost all other instances, I dislike angelica (Guerlain Angelique Noire and L’Instant) but in AG Vanille Exquise, I know this jarring quality subsides (well, somewhat, it never entirely disappears) so I enjoy the ride knowing it will become softer and gentler once dried down.  The edgy beginning coupled with soothing dry down makes me think of the saying about the month of March “... comes in like a lion and goes out like a lamb.”  AG Vanille Exquise also has a beautiful gaiac wood note and is overall a perfectly sophisticated woody-herbal vanilla, actually, it's my favorite. 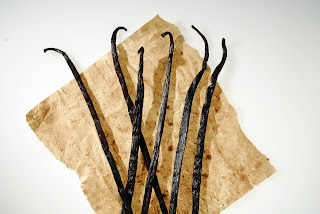 I’m not including vanilla-orientals in this list.  I have a number of orientals which are prominently vanilla that I also enjoy, but I mentally file these in a different category.  Some examples are Profumi del Forte Roma Imperiale, The Different Company Oriental Lounge, Love, Chloe Eau Intense, Parfumerie Generale Felanilla and L’Artisan Havana Vanille (renamed recently but I’m too lazy to look it up).

If you're like me and can’t wear gourmands, what are some vanilla fragrances you've found yourself able to wear?

I am a vanilla-phobic so your article and Sheila's (The Alembicated Genie) suggestion of Montale Boisé Vanillé will be my starting point.

I love the new Mona di Orio Vanille (rest in peace, Mona). I guess some would call it a gourmand, though. It's a little peppery. I've also had success mixing a good quality lavender eo with a vanilla bean "accord" from PA in CA (no plugs here!) -- the herbal lavender offsets the sweet vanilla really well.

Not sure if you've had a chance to try the Jo Malone Rose Water and Vanilla, but I've been enjoying that on and off this Fall and Winter. Granted, the Vanilla is REALLY present during the entire composition, but the pairing with Rose, a mild "Aqua" note, and some smokey/burnt caramelly-wood is pretty dreamy....and the dry down is pretty remarkable (at least on me...).

Dyptique Duelle is another nice and dry Vanilla and I also really like JAÏPUR HOMME (Boucheron) - if you're not opposed to "Men's Fragrances" you should give it a try....it might satisfy your nose without effecting your waistline - I've lost 20 lbs wearing it! (just kidding...but wouldn't that be great if you could???)

Hi memoryofscent,
You know, I think I have Montale's Boise Vanille and forgot about that one. I know I've enjoyed Montale Chypre Vanille but haven't smelled it in awhile. I'll check out The Alembicated Genie as well. Thanks.

Olfacta,
I will be sampling Mona's Vanille for the first time soon. Interesting about blending lavender with vanilla -- that makes sense -- kind of like Strange Invisible Perfumes Magazine Street or Fire & Cream -- those have a strong lavender quality yet also a vanilla type of presence.

Marko,
I've never tried that JM. You make it sound wonderful.
I have Diptyque Eau Duelle and it was just too fleeting on me. I should try it again, though. I used to love Diptyque as a brand so much but their last 2-3 releases have been disappointments so I became a little weary.
I have a few Jaipur's but not that one. I'll give it a go, especially if it a weight loss drug! :0) (yes, that would be wonderful!)

Totally agree on Sublime Vanille - I'm not a vanilla lover, but I could see myself regularly (or semi-regularly) enjoying it. So far the only scent with Vanilla that I've been able to say "oh, okay, that's nice and subtle," has been Passion for Men by Liz Taylor. Weird, huh?

I've recently (in the past few weeks) fell deeply in love with PdN's Vanillee Tonka. I'd love to hear your thoughts on this one.

Bryan,
Glad you enjoy Sublime Vanille. Honestly, (and this is ok) I feel like the lone person who loves this fragrance. Now I know I'm not alone. I've never smelled Passion for Men by Liz but I pretty much don't think anything is weird. If it works, it works! :)

Hi Kym,
From what I recall PdN Vanille Tonka barely registers as 'vanilla' on me. It's more of an oriental or floriental with a hefty dose of carnation. It's very nice, but not something I'd consider 'vanilla' aside from the confusing name which makes everyone think it's a big giant vanilla. Almost every PdN is something worth having... I do need to try her Vanille Intense as I haven't given that one a sniff yet (but remember reading it was mostly about patchouli and not vanilla).

I hate things that smell like cookies, and I'm not a big fan of vanillafied smoked wood either.

I've been dying to try the Mona, and somehow I've never tried Vanille Tonka, probably because I'm scared of Tonka but I heard it's more incense-y?

I was just coming to say, Vanille Tonka!! Love that stuff - but yes, more floral than vanilla, more tonka-incense-lime than vanilla, hardly "a vanilla perfume."

I have to admit to liking Hanae Mori Butterfly, but I only wear it at home. It's too... unserious... to wear out.

audrey,
you name a few I have not tried!

muse,
that's exactly it, PdN Vanille Tonka isn't really a vanilla perfume at all.
I'm smirking that you like Hanae Mori Butterfly! It's hard not to like that stuff. Even though it's entirely unserious :) It's like 'cotton candy floral,' but when you like it and it makes you smile...you outta wear it once in awhile.

I feel exactly the same about vanilla and gourmands - they just make me hungry!
Diptyque's Eau Duelle is the closest I've come to liking a vanilla, but I haven't mustered up the energy to buy it yet.
Day-after Jicky is about as vanillery as it gets round here.

Wow, I, too, am vanilla-phobic, quoting memory of scent. I hate it in candles, room sprays, and coffee. Yes, I am a black coffee drinker, scotch, not bourbon. I never wanted to smell like a banana, a peach, or coconut, or any elemental scent. Neither do I want it dominant in a room spray, except a wonderful room spray, by The Thymes, called Basil, which was really a mixture, but didn't intefere with food or personal scents. For the home they are world class perfumers. I knows vanilla is a great carrier, and is in many of perfumes, b ut I don't like people who have vanilla candles, etc. I leave.

I love the vanilla gourmands, but I also love the non foodie vanillas, and I have three of the ones you listed (Jo Malone Vanille & Anise, Atelier Vanille Insensee and Annick Goutal Vanille Exquise), to which I'd add the late, great L'Artisan Vanilia, which is one of the least foodie vanillas I've ever found. Still heartbroken it got the axe.