A Tauer Drawing to Celebrate the Launch of Loretta 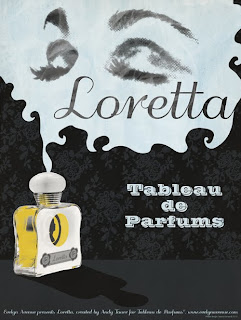 On Friday, October 19, perfumer Andy Tauer and I will be at Scent Bar in LA to launch Loretta, the second fragrance in the Tableau de Parfums line. Loretta is inspired by the short of the same name in the Woman's Picture film series. Miriam, released last year, was a nod to the classic floral aldehydes of the past. Loretta goes in a different direction, contrasting earthy elements with white flowers and dark fruits. Miriam explored themes of nostalgia and memory. Loretta, to me, explores the gatekeeper to fantasy fragrance can become, and how fantasies can combine light and dark elements in unique ways.

To celebrate the launch, we're conducting a drawing on Evelyn Avenue, the home site for Tableau de Parfums and Woman's Picture. Three winners will be announced on Monday, October 21. To qualify for the drawing, we ask that you leave a comment on our most recent Evelyn Avenue blog post about three perfume spots we created for Loretta.

The post talks a little about cynicism in perfumery. With so many things being thrown at perfume lovers, how do we maintain a certain level of optimism? I look at the phenomenon of cynicism from a different point of view now than I might have several years ago, before starting this collaboration between perfume and film with Andy. Over the past year we've asked ourselves what it means to address that fatigue among people who love perfume, and whether we can make some kind of difference in that trend. Is it enough that we're excited about what we do? What makes our excitement any different than anyone else's? How do we make sure that we present our collaboration with some kind of integrity where the norm is too often over-priced and over-hyped? It's an interesting vantage point for me - somewhere between consumer and producer - and the questions have percolated over the last year in our minds as we toured with and talked about Miriam and our intentions.

Winners of the drawing will receive a full bottle of choice from the extended Tauer range (including Tableau de Parfums), a DVD of the first three shorts in the Woman's Picture series, and a vintage-inspired poster designed for Loretta's packaging (pictured above).
Posted by Brian at 10/16/2012 10:56:00 AM