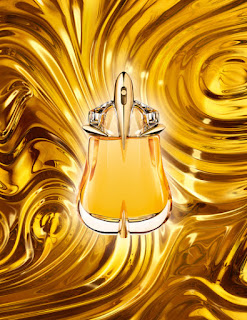 Apparently, the folks at Mugler decided that two Alien flankers a year just wasn't enough, and this year, in addition to the flanker associated with Les Parfums de Cuir and the summer version, Aqua Chic, the brand released Alien Essence Absolue, a purportedly richer, more intense version of the original.

I'm not complaining, because Essence Absolue is the best of the Alien enterprise to date, right down to the bottle, which resembles a cybernetic pear considered by citizens of the planet Jupiter to be the last word in exotic delicacies. True to the literature, Absolue is richer, but exactly why and how, even with a side by side comparison, is hard to explain.

There's said to be myrrh, white amber, incense, and animalistic black vanilla pod. The balance is such that I'd be hard pressed to identify any of that specifically, though at times I feel I can detect what I think might be myrrh or what could be animalistic black vanilla pod. I'm a big fan of Alien Liqueur, and Liqueur was, itself, richer than the original Alien. I was skeptical, when I heard about Absolue; it seemed unlikely that the composition could be made any richer than that. I should have known better, because it's rare a Mugler fragrance seriously disappoints.

What Absolue seems to subtract from the original equation is the very thing I thought made that composition so complex and satisfying. Gone is the roasted jasmine quality, that super saturated, burred nutty thrust. When you smell the two side by side, they seem very similar, for just a short time, as though the same hologram has been projected before you. As that initial impression shifts, their differences, subtle but profound, become gradually more apparent.

The incense aspects of Absolue are minimal; still, they replicate then variate the fuzzy quality of the original's jasmine, generating a strange edged effect to the floral components of the fragrance. Overall, the heart of the thing feels the way the juice looks, golden, shot through with light. While Absolue definitely smells vanillic, it's only when you compare its dry down to the original that you see just how much more vanilla it has, and how the amber elements dominate. I can't detect anything remotely animalic in the mix, and yet this is a different kind of vanilla fragrance, slightly more savory than sweet. The spectral silhouette of original Alien remains, hovering there, but the body of the fragrance has arranged itself differently around that outline. Absolue has more than a little in common with the L'Or version of Dior J'Adore, but where that flanker sat obediently on the skin - even meekly - Absolue has kick.

I find both versions, original and Absolue, to be comparable in projection and longevity, though I've read many customer reviews saying that Absolue is equally tenacious but less of a headache, basically. I never got or get a headache from original Alien, nor am I exactly ever clear on what people who dislike it so strongly are chiefly complaining about, so I can't tell you why Absolue is considered by many of them to be a marked improvement. For me, it's simply a variation, if something so profoundly good can be called simple.

Note: This fragrance could have been far less interesting and still worth the price for the bottle alone.
Posted by Brian at 10/11/2012 11:09:00 AM

Thanks, Brian, for posting these details. I have been wanting to get Alien in some form, but not sure which one. Last year, Octavian Coifan raved about this one: http://tinyurl.com/8ug3ekq but it was a limited edition so my chances of finding it are very slim. Love the bottle, though!

Hey Queen, I think that one is available on the Mugler website. It seems to be the Taste of Fragrance flanker he's discussing. I don't think the liqueur versions are there any more but I was looking yesterday and thought I saw this Alien version.

I adore Angel, and have yet to try the regular ole Alien. Why must you tempt me so!?

The regular ole variety is really somethin itself. I wish I wasn't so tempted, believe me. I can work myself up into getting too tempted for my own good.

Thanks Brian, that's a thought-provoking review. And now, OK, I definitely need to try this! :-) I feel a trip to Oxford Street comining on, as my local haunts don't have it.

Incidentally, I tried the Mugler site, which advertises free samples (I can't see any 'only with purchase' proviso, either). But when I tried to check out with an AEA sample, I was informed that my order exceeded the maximum number of samples, which is - zero. WTH, Mugler site?

I'm not sure I can say what it is about the original Alien which I dislike. Until you described that roasted, nutty note, I wouldn't even have been able to come close. But I think it might be that.

Oh Lord, what IS up with that? If you do check it out when you hit the stores, let me know. I'm curious to see how you think it compares and whether it appeals.

I live in Jersey, and Alien is the THING right now. Jersey Girls love it. You smell it everywhere. I've got this sample, and I will now dutifully go smell it, based on this review, but whoa boy, Alien can get right up my nose as a rule. So although my spirit is willing, my nose may be a little weak.

Really!? I've never smelled it on ANYONE here in Memphis. I do feel your pain. I think if anyone wore the heck out of anything around me I might get sick of it swiftly. On the one hand, it excites me to imagine Jersey Girls running around en masse with a clunky bottle of Alien on person - but I do feel your pain, and I don't know this one will make enough of a difference or dent in the wall to wall obnoxiousness of smelling it from all directions.

You inspired me to try this tonight, Brian. I'm an Alien lover more than an Angel lover, and currently have Alien Essence Absolue on one arm and Angel Cuir on the other... Both are really nice but the Essence Absolue is pretty remarkable. I may have to go back and try Angel Cuir. I don't think they had the Womanity Cuir...

I have now tried this - and for me, it's finally an Alien I can wear! In fact, I like it so much I barely tried it for ten minutes before I went back and bought it.