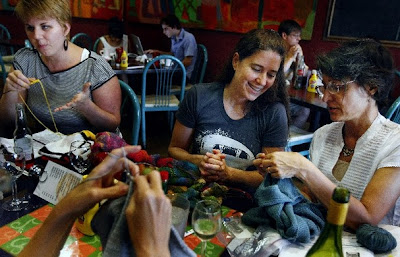 A week ago Sunday, I returned from Los Angeles, where Andy Tauer and I launched Loretta, the second fragrance in the Tableau de Parfums line. The turnout was nice, what seemed like twice the size of last year's release event for Miriam. I smelled a lot of new things I'd heard about but hadn't had a chance to get my hands on. Some were interesting. Many were disappointing.

The first several days of last week were full of catching up. The trip to LA was brief but even a brief interruption these days leaves me with a lot of loose ends. It was in this scattered frame of mind that I received news of a friend's death, early Thursday morning. When I was told by text at 6:30 a.m., it hardly seemed real. It was real, but even a week later, I keep reminding myself it's actually happened.

My friend was a pretty wonderful person. I met her about eight or nine years ago, when I wandered into a yarn shop she owned at the time to pretend I knew how to knit. I don't think I'd tried anything at that point - not even a scarf. I was attracted by the possibilities and wanted to believe knitting was something I could do if I practiced enough. The yarn was like perfume - there was so much of it, in so many different varieties. The place was like a candy store.

On any day of the week, I'd drop in and people were there knitting. If the place was open there was someone there. Often a group. Papatya had opened the store a year or so before. She held down a day job at an architect firm as a draftsman. On her lunch hours and after she clocked out at the firm, she was often at the shop, chatting with everyone, knitting herself. Weekends the place was full, and every Tuesday night people met at a large table in a side room to knit and catch up.

I met a lot of people there but no one more interesting than Papatya. Her life seemed to be very much in order. She was assertive, funny, friendly, ambitious. It seemed like she could knit or solve anything, and I doubt I would have progressed as quickly as I did without her constant tutoring. Any time I got myself stuck without knowing why, I could run over to the store, knowing she'd help. I'd get all my yarn tangled up and she'd patiently untangle it for me. She liked to do it, she said. I still find that hard to believe.

I'm an adventurous, maybe lazy, knitter. I want to use whatever yarn I like for the pattern at hand, regardless of the gauge called for. I want to use odd color combinations. I progressed to blankets and sweaters sooner than a lot of knitters do, and I wasn't afraid to take chances - but largely because I knew Papatya would support me when I hit a dead end, and she typically encouraged my choices, despite the often mixed results.

When the store closed a year later, the Tuesday night knitting group moved to a local cafe. I got busier and busier with film work, often too stressed to attend. The faces changed, but as usual Papatya was the central force holding the social network together. I saw Papatya less during that time, but she was always supportive of whatever I happened to be doing. I know from hearing others talk over the last week that she was like this with most of her friends. She made you feel you were one of her favorite people. She had that quality. It breaks my heart we weren't able to help her the way she'd helped us. She was obviously in a fix somehow, in a difficult place emotionally and mentally.  She was so good at solving other people's problems that it was hard for us to see she might need help with her own. We'll never know why she took her life last Tuesday, or why she chose to do it that day, which held a lot of significance for her, and for a lot of us.

I'm going to miss her. I miss her already. Everything I've knit reminds me of her. Knitting itself does. I've spent most of the last week editing, which helps me hyper-focus and keep my mind from spinning through the details, the why and how. I've surrounded myself with perfume - old favorites, which hold a particular appeal right now. That transports me to a better place. I hope she's in one too.

Very sad that the world has lost a compassionate, sensitive person, the exact kind of person this world needs the most. A lovely tribute, Brian. The patience knitting requires takes on a new meaning with your friend Papatya's memory in mind.

Brian, I'm so sorry your friend died, and the fact that she chose to end her life makes it all the more difficult. Those details of when, how and most of all...why are hard to reconcile. I always wonder, was it planned? Did something happen that was just too much to bear? And was that thing the final straw in a long collection of hurts?

In the end, none of those things really matter. What matters most is that you lost a friend - one that showed you love and patience at a time that made a big difference to you. Sending my thoughts and healing energy your way.

Sorry to hear this, Brian. I'm sure Papatya is resting in peace.

Sorry to hear this, Brian. I'm sure Papatya is resting in peace.

Brian, I am so sorry to hear of your friend's passing. I count myself very lucky when I am able to know special people like she surely must be, but it sure is hard to lose them. And perplexing when someone takes her own life, leaving so many questions behind.

I didn't know you knitted. I find myself avoiding yarn & fabric stores for the most part because I don't need yet another hobby--yet I can't resist them. Nice that you had someone to egg you on.

Brian, I'm so sorry to hear about your loss. She seemed to be an incredible and beautiful person that obviously touched many people's lives in a positive way. My heart goes out to all her family and friends.

I'm so sorry, Brian. She sounds like a lovely person. Suicide always hits hard - so many questions and 'what ifs'.....

Brian, so sorry to hear of your loss. Sending everyone who knew Papatya peace.

I'm terribly sorry to hear of your loss, Brian. If it brings any comfort, then know that this piece that you wrote about her reads like the most sincere and lovely of homages.

What terrible news to get, Brian, I'm so sorry. I belong to a quilting guild, and the ladies are like a bunch of aunts: hilarious, supportive, and encouraging. As much as I love perfume and my online community, I'm also grateful for those real-life connections. Peace to you.

Thank you so much, everyone. It's been a rough week and a half. I'm sadder than I can articulate about the loss of my friend; even sadder knowing that her family, with whom she was very close, must be going through an even more profoundly difficult time.

I would be upset about the loss of anyone. However, Papatya was a truly exceptional person, and an important part of my worldview, so this loss in particular has really left a hole in my heart and my mind in a disordered, misdirected state of affairs.

I'm so sorry for your loss. Losing someone to suicide is so difficult and that sorrow never really lessens, but you will learn how to cope with it better on a day to day basis and, eventually, time and new memories bury it a little deeper, so that you at least don't have to deal with it as often as you did at first. Thank you for sharing your memories of your friend with us and honoring her in that way.

Thats sad to hear. I never tried knitting, got into sewing but knitting wasnt for me. She sounded like a nice person.