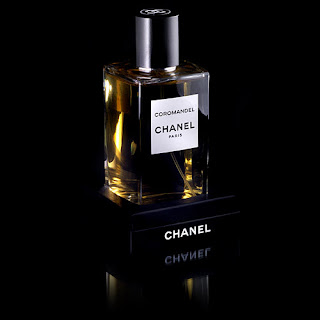 Abigail reviewed Coromandel months ago during a Chanel intensive, and I remember thinking, "That sounds promising," but when I tried it at Nordstrom it struck me as being more than a little similar to Prada for Women--which meant a definitive No Thank You for me. As usual, I should have listened more closely to my co-blogger, because of course this stuff is leagues away from Prada (or anything else, really) and so good it's almost indecent.

I'm a fan of Jacques Polge and Christopher Sheldrake, the two behind Coromandel, and I do see a connection to Sheldrake's Borneo 1834, another fragrance adjectives fail. Is Coromandel Chanel's version of Borneo, as some have suggested? Probably no more than Diorella, by Edmond Roudnitska, was Dior's version of Le Parfum de Therese, also by Roudnitska. To be sure, Coromandel is closer to Borneo than to many of Sheldrake's other fragrances, but the contribution by Polge is significant enough that it fits resolutely within the Chanel line-up, not just its Les Exclusifs brethren but all the department store mainstays, from No. 19 to Allure, with a definite tip of the hat to Chance.

Coromandel has the trademark citrus shimmer that many of Polge's Chanel fragrances have, that sense of being illuminated from within, shot through with light. The most recent example of this tendency would be Chanel No. 5 Eau Premiere. The in-store displays for Eau Premiere feature a tiny light under each bottle, driving the point home. As far as I know, Sheldrake had nothing to do with the latest flanker to No. 5. Eau Premiere has a fraction of Coromandel's staying power, and none of its sturm und drang. Part of what gives Coromandel this sense of drama is probably its treatment of patchouli, a note it fully embraces. While few will characterize this as a head shop patchouli, no one will accuse it of transparency, either. Much has been made of the cleanliness of contemporary patchouli. Though definitely of its time, Coromandel has an earthiness the majority of patchouli-focused fragrances take pains to scrub away. For this alone, it sits alongside Cuir de Russie as one of the bolder iterations of the Chanel sensibility.

You'll find quite a dollop of vanilla in there, as well as amber, spices, woods, and frankincense. Coromandel broods around on the skin with a forcefulness that no other Exclusif displays. It smells of cosmetics periodically, specifically powder, and I would wager there are aldehydes in there, but none of these make it particularly feminine to me. Strangely, the overall effect is simultaneously subtle and robust, asserting itself with a sinuous stealth Ninotchka might applaud. Chanel calls Coromandel exotic and voluptuous, a "woody oriental", which is a bit like characterizing a Cadillac as a four wheel vehicle. For me, Coromandel straddles the gender divide with unusual finesse, making transitions back and forth as it plays itself out. Chanel says the fragrance pays homage to Gabrielle Chanel's passion for the decorative lacquer of the same name. The intricate, submerged intaglio of coromandel screens make an apt visual for the perfume's peculiar ambiance, rendering polished detail out of rough hewn lumber.

Lightning strikes twice, I guess. Last year, I received a half-empty bottle of Cuir de Russie from the Chanel Boutique in Beverly Hills. I assumed at the time that the leakage and the busted atomizer were due to magnificently silly packaging by the staff (several sheets of tissue paper and a lot of air space, if memory serves). Coromandel came in a box which was packed more meticulously than the cookies your grandmother sends at Christmas. Nevertheless, it too was half gone. The perfume was still in its cellophane wrap, and once I removed it I had to use a pen knife to pry open the Les Exclusifs container. That tells you something about the quality of oils used in these fragrances, so thick they served as glue with the addition of a little heat. The fact that the atomizer was askew suggests faulty design--or extraordinary bad luck.

Then again, I know that Abigail's bottle of Coromandel leaked significantly in the mail. That makes three, yet when I called Chanel to complain, the sales associate reacted as though I were reporting a Bigfoot sighting. "I've never heard of anything like that happening before," he said, adding very quickly: "I'm not saying I don't believe you." He didn't say he did believe me, and I had the distinct feeling it wasn't his first time around the block with this kind of phone call. At least they offered to send a replacement bottle, without asking me to return the first one. There's something vaguely tawdry and thoroughly inconvenient about returning a broken bottle of Chanel to Beverly Hills, as I was asked to do with Cuir de Russie. Call it insult to injury, or luxury goods buzz kill.
Posted by Brian at 11/16/2009 09:37:00 PM

Brian -- I wonder why some people are experiencing leakage like this from the Les Exclusifs bottles? I ordered my Sycomore bottle from Chanel, and it arrived entirely full -- a friend of mine ordered a bottle of Beige from the Chanel website, as well, and it, too, arrived completely full.

But that's just two to your three.

They asked you to *return* it? Ye gods, that is tacky. I got a 98% full bottle of Sycomore for $100 because the seller had received it with a broken atomizer. Those large bottles are heavy and need to be shipped much more carefully than they sometimes are. I would be hesitant to order for shipment. The packaging they come in is totally insuffient to protect a bottle of that heft. Both my other Les Exclusifs purchases were in-store.


Interesting about Coromandel. I went from liking it initially to not being so wild, but it intrigues me enough to go back. I do think that it is a singularly Chanel take on patchouli, and the aesthetic reflected in the line as a whole reflects a strong artistic direction. Maybe some day it'll be the same love with Coromandel I've found with some of the others.

I'm being absolutely tormented by Coromandel. I had the good/bad fortune to be given a very large sample (mini bottle) of this by the nice SA at the Chanel store in San Francisco (perhaps you should do your ordering from them instead of from Beverly Hills?) and now I'm obsessed with it. I want to wear it all the time but am afraid to use it up because I don't want to have to buy one of those huge bottles!

On the positive/negative side, at least I can go pick up the bottle in person.....

I don't know, Nathan. Maybe it's just me. I would love to make Chanel purchases in-store. The problem is, when I'm in a city like LA or NYC, I'm too busy running over to LuckyScent or Aedes, where there are millions of things I haven't smelled yet.

What I wish really is that they would have sent me another kind of perfume altogether. Much as I love Coromandel, I'm no more certain than anyone else who contemplates these mammoth bottles (short of, say, Nina Z.) that it's possible to ever get through one of them, so a fourth missing is a drop in the bucket.

I do think it's something about the atomizers, because the boxes, if packed well, keep the perfume in place, though, I don't know... How do you explain an askew atomizer unless the bottle was jarred, no pun intended.

Daseined, I'd be curious to know what other Les Exclusifs you purchased, and how you're liking Sycomore. What are your thoughts on it? I almost got that instead of Coromandel but as of now I remain undecided on it. I have so many vetivers: what makes Sycomore exceptional?