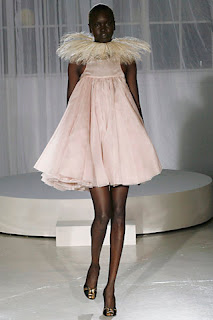 I wonder. Maybe the folks at YSL created a bottle in the shape of a spinning top so that it might withstand all the knocks it gets. The derision toward Baby Doll is so near-unanimous that until recently I basically ignored it, like a movie I've watched and don't even see at the video store anymore. It's on sale perpetually at TJ Max, which seems odd, given it's also ubiquitous at the department store, where, increasingly, the counter space is sparse. Both Macy's and Dillards have "reorganized" numerous times over the last six months to a year, shrinking their inventories by half, yet Baby Doll remains.

I'd imagined Baby Doll to be sugary sweet and mind-numbingly floral. Michael Edwards lists it as "floral--fruity". I thought it must be the quintessential example of the category, the be all and end all of a trend I've been not-so-patiently sitting out. The top notes seemed to confirm the suspicion. According to Osmoz: black currant, orange, apple, pineapple. What else could there possibly be to say?

I was pretty surprised when I smelled the stuff, because while it is sugared and it is somewhat floral, the first and lasting impression is salty and bitter. I mean this in a good way. There's something so tart and puckered about Baby Doll that it reminds me of some dessert I'd enjoy smelling if not tasting at the local Korean restaurant. There's a deliciously pickled quality to it, something that wakes you up and takes you on a joy ride.

Is it childish? I expected it to be; not just because of the name, a dead giveaway, but because of the packaging and the reputation of the juice. Wearing it, I'm not apt to answer so conclusively. There's no question it's not your dress-up oriental. This is not Opium. You don't wear it to a funeral, probably, unless the deceased asked for a party. It isn't stuffy. It isn't anywhere near sophisticated. This is the kind of perfume that enters a lame party and gets everyone dancing by forcing the DJ to change the tune. Childish, to me, is Britney Spears Midnight Fantasy: something you might whip up in your E-Z Bake Oven in a matter of minutes because, really, it's all about the icing.

What I realized, smelling Baby Doll, is that the name is tongue in cheek. This perfume was released ten years ago, before the fragrance industry started so relentlessly marketing to tweens. It speaks to a sensibility and a stereotype, playing with connotations and received ideas in a child-like, as opposed to childish, way. While expecting very little from YSL is understandable at this point, picturing faux-pouty April Lavigne or a sixteen year-old with glittered lip gloss might be just a bit literal. Baby Doll is decidedly adult. It isn't a young girl but a grown woman in a sexy dress and mary-jane shoes with six inch heels, playing off a man's desperate desire for youth with the kind of wit only a mature woman has.

Cassis often does weird things to a perfume, when handled well. The nearest analog to Baby Doll, for me, is Cartier's So Pretty, the brainchild of Jean Guichard. Released in 1995, four short years before Baby Doll, So Pretty's use of Cassis is more openly staid, but the anarchy it sets loose on the chypre template has the spirit of the young in it. Cassis has an air of insolence. Used intelligently, it's a bracing shock to the system, a contradiction, both succulent and puckered. So Pretty is a young girl dressed up in her mother's lipstick. Her image in the mirror recalls her mother's generation but looks straight ahead with a confidence bordering on arrogance. She looks rather silly making faces she doesn't understand, but the lipstick does a lot of the work for her. Baby Doll is the older woman the lipstick belongs to. She doesn't have to make faces anymore. Been there, done that, with an evolved sense of humor and irony to prove it.
Posted by Brian at 11/08/2009 10:47:00 AM

Beautiful essay. I love Baby Doll and I never thought of it in the way that you have.

I agree with you on Baby Doll. It is all about the tart citrus for me and I find it refreshing.