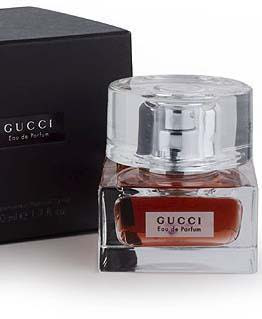 The juice is dark brown, that alone made me want it. It took me a few wearings to truly love it, but, oh, how I do.

Gucci eau de parfum was created in 2002 by Daniela Roche and was apparently based upon an idea by Tom Ford. Do not confuse Gucci edp with Gucci by Gucci or Gucci II which are inferior by a mile. Gucci by Gucci is housed in a square brown bottle. The good stuff, the stuff I'm writing about, is Gucci edp, pictured above, it's the brown juice in a clear glass bottle. A hefty glass bottle.

Gucci eau de parfum is easily Gucci's best fragrance next to Envy. Gucci edp is dirty. It's a filthy little trollop for the first hour. One you might wish you hadn't worn to the office. I don't even know how to categorize Gucci edp. It's a whole number of things all at once - it's a dirty musk - a woody oriental - a luscious skin scent - a sweet vanillic leather - a herbaceous yet synthetic elixir. The word potion comes to mind when I sniff Gucci edp. It seems to be a potion rather than a perfume. It's drop dead sexy in an understated manner. It's Debra Winger in Urban Cowboy. It's not a curvaceous blond bombshell but a tousled natural beauty in jeans and her lover's t-shirt. She probably has a tattoo and a scar.

Gucci edp starts off a bit rocky for me. It has a weird medicinal start, perhaps the mixing of notes such as thyme, cumin and orange blossom. I've come to love this odd start in the way I sometimes long for the beginning of Tubereuse Criminelle. Though, for the record, Gucci edp's start is nowhere near as difficult as Tubereuse Criminelle. After about an hour, Gucci edp becomes so easy to wear. It melts into my skin and becomes one of those "me but better" fragrances. Gucci edp doesn't shout "look at me" but instead slinks into the room and slowly but surely takes the center of attention. It's a potion. I'm telling you. There's magic here. 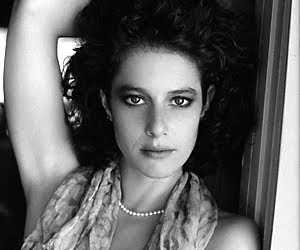 Awesome description. Now I want to rush out and give it a sniff, try it on, and let it adapt to me. I see myself as an Urban Cowboy Debra Winger/Sheryl Crow/Carly Simon kinda gal, I could picture that sexing me up in a natural way. Thanks!

Sounds great. So, where do you get this potion?:)
Nika

Gucci is one of my favorites--one of those perfumes I bought two of because I unreasonably worried I might run out. To me it's pretty smooth and relaxed. I would never have guessed there's cumin and thyme in it, though now that I know, it helps explain why I'm so crazy about what I assumed to be a straightforward fragrance. It has very good staying power on me, and after a while I started to think there must be some leather in it, because it has a thick, substantial sort of heft to it; what seems like a minor strength tar or something gives it a nice opaque quality. I'm shocked there's no jasmine listed because I've always thought this to be a jasmine soliflore. Every time I wore it I thought, why am I so in love with this silly little jasmine thing? I'm so psyched to read these notes because they really do help me understand why I've enjoyed this stuff so much. And the bottle: Somebody (Tom Ford) understood the psychology of packaging and got it right. This is like the old Chanel bottles and the Exclusifs, a big brick of glass which matches how important perfume can feel. This is a stealthy mellow gem.

Fine fine fine. Just where do you get off, adding stuff to my To-Test List? (Kidding. It's only my bank account that wishes to raise objections - the rest of me is rather happy.)

I started out loving L'Arte di Gucci for its rose-in-a-thorny-garden prettiness. It was only after I'd bought a bottle that I fell in love with that dirty undertone and realized that it was costus that had so enthralled me. Yay for Dirty Good.

I feel exactly the same about this scent as you do. When I first tried it, I didn't think it was *me* at all...good god, all that HELIOTROPE! But it grew on me fast, and I realised it is totally *me* after all. It's an addictive potion that's for sure. I've bought three back-up bottles since the summer, but that'll only last me 10 years or so, and I could easily live another 40 years so clearly I need more, right?

I don't find it very dirty, but it's definitely sexy. I love that crazy medicinal opening.

Sounds great. I haven't heard of it though.

Innit GOOD?
I think the dirty-interesting funkiness is the thyme. Any fragrance with it that I've tried so far has this smouldering, innate, under-the-radar dirtiness to it that reads as really sexy to me.
Diptyque Oyédo for one, is one DIRTY orange soda.

I don't think I've commented on here before, by the way. Love the writings. :)

Nika,
I haven't seen it at the usual department stores for awhile. I've needed to search online for it. The discounters sometimes have it and it's on ebay all the time.

Karen G.,
Clearly you need at least another bottle just in case ;) I have 2 myself. Also have 4 bottles of Theorema. Think that's enough?

Arachne,
Thanks for stopping by! I'll have to look around to see what else contains thyme. I didn't realize Oyedo had it. I love that stuff. Sparkling, fizzy-good, monstrous grapefruit.